I am in my trial period for DT and, being a complex beast, I am slowly getting the hang of it but there is this issue that puzzles me: somehow I managed to import my full RSS subscriptions from News Reader in form of an OPML file into Devonthink.

So what happens now is that everytime I launch Devonthink it “updates feeds” and around 11503 items appear on my global Inbox. I have tried sending that group to the Trash, but upon restart they appear again and download the contents of the feeds (Devonthink does this really fast, by the way) It seems that Devonthink deletes the downloaded items but not the subscription themselves! 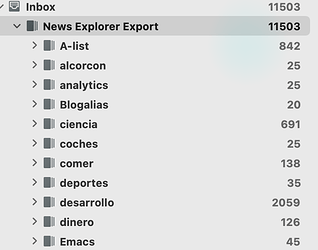 This would not be more than a curiosity except that… the items get uploaded to iCloud via CloudKit and then it becomes a nuisance.

I have tried searching for the opml file in my databases but no luck, any help?

Those aren’t feeds. They are groups.
Did you empty the database’s Trash?

Yes they are groups, and the feed posts appear are the items inside each corresponding groups (this is expected, of course)

I deleted them and emptied all the trashes just in case, a couple of times. But no matter what they keep reappering (every time the number of posts is the same, 11503 so no effect has happened)

Now this is interesting

Quit DEVONthink.
Go into ~/Library/Application Support/DEVONthink 3/Inbox and remove any extraneous files in that directory, if present.

Things had to become worse before they became any better…

But sure there was that pesky OPML.

As per your suggestion, removing it solved the problem. Thanks a lot!

Now there is obviously something that I do not grasp about DT behaviour. Why was this happening? Why the OPML file itself did not appear in the global Inbox? And if I had done this with the purpose of importing an OPML file, why was DT creating a new group with my groups of feeds on startup every time? Would it have been different if the I had put the OPML file directly in a group in a database instead of the Inbox?

How did you put the file in the Global Inbox?

Also an OPML file will not be imported as a singular file. It is parsed and converted into separate entities for use in DEVONthink.

I more than probably dropped the file from the Finder to the Inbox shortcut for archival purposes.

That should work but perhaps a bug has crept in with OPML files. I’ll check this out.

As a mater of note, I use Feeds in DT and never had this issue. Even when other more specific RSS reader generates some duplicates because network bounce or original poster messes with the feed, DT not.

I have a standalone database for that, synced across all my 3 Macs and never had that issue.

The issue is caused by OPML files added to the Inbox folder, the next maintenance release will fix this.

Thank you all, this level of support is amazing.