I am using DEVONthink Pro Office on a MacBook Pro running Sierra. When I attempt to scan through the program, I get an error that says “The Selected Folder is not writable.” no matter which folder I choose (see attachment). 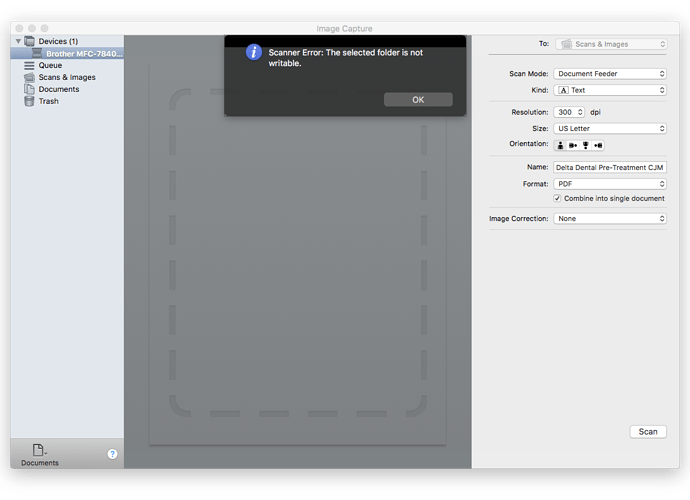 Scanning works just fine through Image Capture. Am I doing something wrong?

I have a Brother MFC-7840W that is connected to the network.

Were you trying to save the scanned file to a folder that’s cloud synced, such as Dropbox or (under Sierra), if the option to sync Desktop and Documents folders via iCloud?

As cloud storage/sync of DEVONthink database files could result in database damage, such locations are no longer allowed by DEVONthink.

A safe location for database files could be a new folder, e.g., one named DEVONthink Databases, in your user Home folder.

Wether I put my database in my documents folder, in my home folder, inside a folder inside my home- or document folder: alway the same error (like above). Scanning and sending to DT works fine, but not importing from inside the app.

Unfortunately this error is due to a bug system scanner library in macOS Sierra, we are currently developing a work around to this issue.

Thanks for the replies. I will just scan from Image Capture in the meantime.