Scripting does not work - command not found error

I have DevonThink Office Pro 2.3.5. I was trying to create a backup using Script/Export/Daily Backup Archive and got error pop-up saying:
sh:date: Command not found

Is something wrong with my environment? How can I fix it? 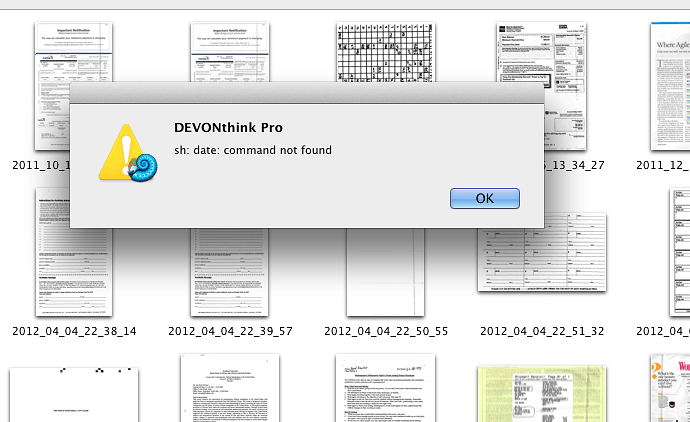 Probably worth re-installing the scripts from DEVONTthinkPro Office > Install Add-Ons would be the best thing to try. The script works for me.

Is something wrong with my environment? How can I fix it?

Perhaps. The script should execute this line successfully

but it seems to be failing for you.

Open the Terminal (it is in the Utilities subfolder in your Applications folder) and at the command prompt type:

This is the same command the script is intended to execute (without the quotation marks). If you get an error in the terminal, then there is a possible OS X issue. Shut down everything and reboot. Let us know if that resolves the issue.

Thanks. I run script reinstall but no results. Still got the error.
On my terminal windows, command is working fine:

I believe the script is not finding a command shell that includes the ‘date’ command. It’s possible you have a permissions problem on that script file, or your shell environment is not configured the way the script expects it to be, or the ‘date’ command was removed from the default shell. (More information than you probably ever want can be found here.)

Did you reboot, as suggested?

Create a new user on your machine, or log in as a different user, and attempt the script.