I learnt the word from @Bernardo_V!

Thoughts on migrating from Ulysses

It would be nice to have transclusion working in DT3 (part of the MMD 6), but this can be overcome by letting the files in an indexed folder and then using Multimarkdown Composer ou nvUltra to view them.

. (2) It takes some time for me to cognitively filter-out all those formatting characters while reading the notes in raw-mode and I had to switch back-and-forth between the raw and preview mode for a while.

What was your solution? Did you just get used to seeing the formatting characters, or did you find a workaround?

However, I only use DT’s internal editor. Some users prefer using external WYSIWYG markdown editor for a unified interface.

I don’t want DT’s Markdown editor to be WYSIWIG because that defeats one of the main purposes of Markdown.

However, every Markdown editor I’ve seen EXCEPT for DT offers some light formatting in the editor itself. Text wrapped with double-asterisks is a bit darker, blockquotes are indented, headers are bigger and darker, etc.

This is one of my top two or three feature requests for DevonThink.

I guess I could get used to working with the preview window side-by-side with the editing window. However, that gets cluttered if I also have OTHER windows open on my desktop.

P.S. It just occurred to me that I’m wrong about DT being the only markdown editor that doesn’t provide some visual formatting. The Discourse editor also works the same way as DT’s. Somehow it’s not a big deal in Discourse.

P.P.S. Apologies if I’ve taken this thread off on a tangent – however, I’ll bring it back home a bit by noting that Ulysses is one of those Markdown editors that offers light formatting, and it does a great job of it. One of my favorite features is its proprietary syntax for embedding comments in a document; just surround the comment in ++double plus signs.++ I use a stylesheet that shows comment text in red. So I have little notes to myself throughout drafts: “check spelling of this guy’s name,” “what year did that happen?” etc.

(1) Get used to “not-seeing” the formatting characters.

just get used to seeing the formatting characters

(2) The only experience I have is Typora which is a very nice and minimalist app. But I choose to stick with DT’s editor shortly after to avoid using too many apps.

FYI you could use either DT3’s Markdown editor or double-click and open the same Markdown file in Typora. I use Typora more myself due to some issues with the DT3 editor such as rendering output as single line entries rather than a block of code.

rendering output as single line entries rather than a block of code.

I filed a bug report, screenshot and examples and sent it over maybe two months ago. It’s pretty easy to repro, just compare the output between DT3 view and any markdown editor app view.

Although I know about it, I don’t use it as often as I should. Perhaps if it were included in DT3 I would…

Connected Text, a windows wiki software, does something similar and you can even select the section you want to transclude. This makes it very very interesting. (Only problem is that it does not have auto wiki linking…)

and any markdown editor app view

If you are referring to not using two spaces at the end of paragraphs, that is not part of the Markdown or MultiMarkdown spec, so it’s an extension to Markdown therefore not a bug.

Staying within the boundaries of Markdown or MultiMarkdown is the best option if you will be using Markdown in DEVONthink.

@mals I usually keep quotes and notes from a book of paper in the one note (current note). if there is a big connect I notice with another book or paper, I will sometimes dump that quote with notes into the current note. I don’t use any tags. I date and time stamp each note, something, I think, Luhmann did with his slip box? As I said I am no DT expert and use a minimal set of its myriad features. I have a short working paper that details my history in all of this, a pdf: zettelkasten.pdf (184.8 KB)

No it’s about single quote code and code block

has gaps with css backgrounds so it loos like code. It has nothing to do with markdown standards, this is plain CSS where a background should be continuous.

Note that in Discourse here it looks as it should.

BTW maybe the most common Markdown today is the github specific Markdown. Typora even adds more formats that are useful for layout, notes and so on. But that’s another story.

A screen capture of what you’re referring to would be helpful.

MultiMarkdown is viewed as the natural successor to Gruber’s original work. And supporting multiple flavors of Markdown is not in our plans.

I filed a bug report already and this has nothing to do with multiple markup formats. It’s a css rendering bug on your side. But here’s another screenshot: 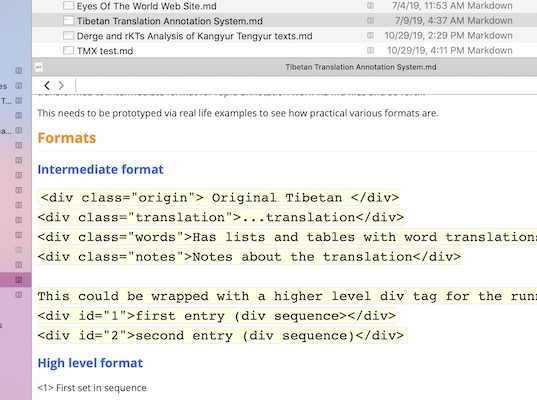 I assume you could figure out the css rendering issue with the code block. If not let me know and I will point it out.

PS: Typora seems to be nice and support various Markdown formats. It’s nice and the beauty with Markdown is that if the format is not understood, just the plain text tag format is rendered as plain text without causing problems: for example foot notes and table of contents tags.

Anyway, as mentioned many times, this has nothing to do with Markup, the example above is plain Markup, not even MultiMarkup.

Are you sure it is not related to the css you are using?

This is what I’m seeing with code fenced content… 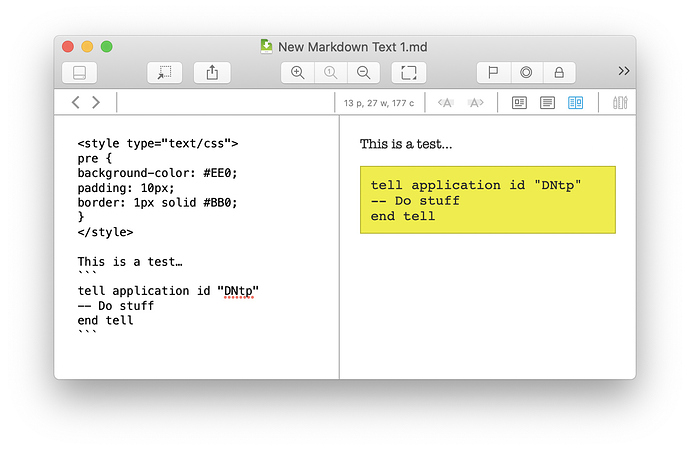 Well, that was a screenshot from DT3.0.4. I think it’s has to do with how the css rendering is done per case. That’s why I sent a detailed example + css file in the previous bug report that I assume you have. Any css rules should render for blocks, if not it’s a bug. Note this works fine in Visual Studio Code view and Typora and other MarkDown editors I have here.

I usually keep quotes and notes from a book of paper in the one note (current note).

Thanks for sharing the document! I will read it shortly.

You may want to take a look at this script. It’s not Roam Research, but the script will merge all notes under group/tag in one refreshable file and offer direct[almost] editing of the source notes. Just an idea.

Completion of the previously mentioned proof-of-concept script Proof of concept: Merging a mixture of RTF/RTFD/MD files to MD and with links What the script does: Merge markdown and RTF/RTFD formatted files into a merged file (MV) that is in markdown format. User can access and edit each original source file directly[almost] within the MV. The MV can be refreshed to reflect the latest change in the source files. If the MV is linked to one/more groups or tags, the MV can be refreshed to inclu…

@ngan I went through your script. Sounds like an interesting idea, and perhaps is a seed to build some roam like capability in DevonThink.

on that note, here is an outline of features that I think will bring in some of the most powerful roam like features in DT. I would build if I knew how to. my programming skills are rather basic.

thoughts, in case you read through the above. and if you know how #2 and #3 above can be done, do suggest and I will try and take a crack at it, and then will try to see if I can do #4.

I am also trying to implement a zettlekasten in DT3. All the big advocates of the method use plain text format like markdown for their zettles, but I also read somewhere that the DT3 is better handling notes in rich text.

I’d go with Markdown: Text decoration is very easy to do in Markdown and it is much more future-proof then RichText.