Selectively syncing the contents of a indexed database per database

When syncing I noticed there’s an all-or-nothing approach to syncing contents of an indexed database for a given sync source (such as iCloud). Was there a reason not to expose that option on a per-database level vs per-sync level?

For context, I have a database that indexes my Synology NAS that I don’t want uploaded to the cloud for both size and sensitivity reasons. However, I also plan (in a separate database) on indexing local directories (for things such as obsidian notes) where I would want the contents of the indexed db uploaded.

Is there a work-around to support this today? It mainly affects when I try to use DTTG on my iPhone since all the documents I want won’t be synced, or I have to sync everything and then I’m uploading more files than desired to iCloud.

Metadata only _(which we call a “shallow Sync”) allows you to set Download Files to Always (a full Sync) or On demand (a shallow Sync) for a sync location, an entire database, or individual groups in a database.

Alternately, some people have chosen to create smaller databases, just for syncing.

However, DEVONthink does not support shallow syncing.

Thanks for responding! I believe I may not have been clear exactly what I meant.

Here’s a couple of images that might help clarify my ask: 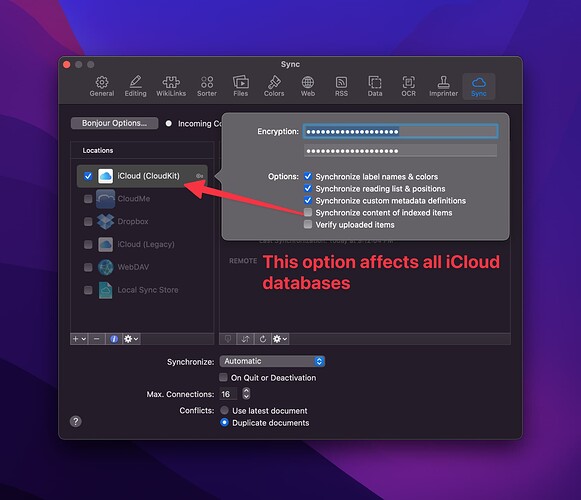 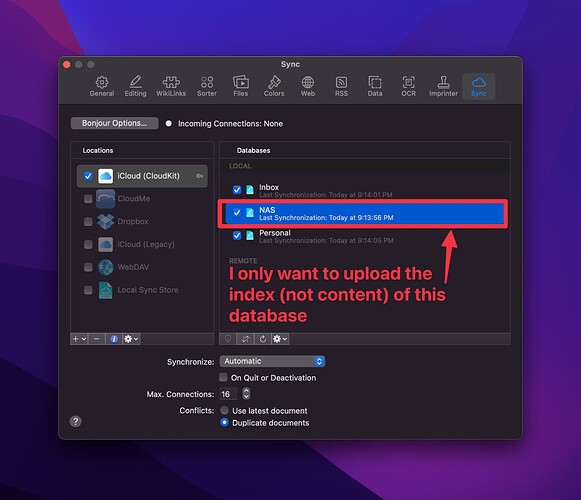 What is it you call an “Index”? Indexed files are those that are “pointed-at” from inside DEVONthink to where they reside on the file system outside of DEVONthink. You trying to use DEVONthink to sync files that are not in DEVONthink?

Correct, I’m trying to sync content that is indexed by Devon but not contained within my database. This feature already exists.

However it seems has a limitation where you can upload the content of indexed files for all databases with a sync setting (such as iCloud) or none at all. I’m just asking to see if we can have a half-way point (refer to screenshots in my last post)

If you put those files somewhere that will sync to another device, independent of DEVONthink, that would work. Still can be indexed into DEVONthink, of course. If you do this, be sure you have the files “available offline” and all located on the local disk.

@Ceveos I completely agree. Sync should be a per-database option, not all (or none) as it currently works. This has caused me to stop using DevonThink to Go except on rare occasions.

I’m on the trial of DevonThink To Go, and without this feature – just like you – makes it hard to use. Adding this (relatively) simple feature I think will go a long way in supporting complex workflows I think.

The request is noted, with no promises, of course.

When using WebDAV you can make different stores in the same location, allowing one store to upload the content of indexed items and another store with just the metadata.

But probably very few customers run their own WebDAV servers.

The same applies to CloudMe; and of course you could set up sync stores on various services (iCloud, Dropbox, CloudMe) each syncing just a selection of databases.

And CloudMe is actually a WebDAV connection under-the-hood.