I was just working with Evernote and used a feature that is very powerful. I don’t know whether this is only in EN Premium (which I have) or in the free version, too.

I have an EN mail address and anything I send to that address goes right into the EN folder I’ve designated to get all new stuff (similar, I guess, to the Global Inbox in DT).

This would be another great way to get data into DT. Does it exist already and I just haven’t found it, or is there a possibility that it will be introduced into DTOP?

DEVONthink does not have an email address like Evernote. Evernote is hosted in a community server, and you use the various Evernote clients to access it – thus it can manage inbound emails and direct them to the proper accounts.

What you do is make a rule, and have the rule invoke the script. So, for an example, a rule that monitors mail coming to a certain account, or from a certain sender, or with a certain subject line – could be send to DEVONthink. Even further sophistication is possible - sending some types of attachments to certain groups, etc.

Korm, thanks so much for this information. I had no idea about this and now I see all sorts of possibilities for things I can do. I appreciate it.

I used the mail rule,it works!

but I have a problem:the picture in the mail body is just a “X”

i.e.i mail this webpage to my mail

I received the mail and inbox to my Devonthink pro globle inbox,but,you see the “X” now.

can you help me about this?Thanks!

Use the “Text Alternative” button. See

DEVONthink doesn’t keep a record in the database of every import action, what documents went where, when, etc. So yes, you’d either need a script modification for every destination, or some other approach. The “text alternative” is not a sticky setting. Stickiness has been requested, IIRC, but is not now an option.

Use the “Text Alternative” button. See

Thanks for your reply,but you see,I have not suck a button as you said.I’m using DTP,is this only available in DTPO?

I have a follow up question in sending email to DTPO.

I am still using the trial version of DTPO and am exploring its possibilities. I really thought that it would be possible to send an email to DTPO. It is indeed a powerful feature for OF and for Evernote (though I do not want to use Evernote).

Has the no email option for DTPO changed since the last messages here from 2012? If not, here’s what I would like to know: I usually have a specific email (not a general rule I can apply) that I want to send to my inbox. How can I go about this without scripts? or How can I use scripts for this purpose? It is likely that when I become comfortable with scripts (probably in the distant future), I will really like this feature, but at the moment, I am mostly interested in emailing content (files, emails, webpages) from my iPhone to DTPO Inbox.

No, this is currently not possible to email to DEVONthink (and Evernote relies on you haveing an Evernote account for this to work). We are looking at a more flexible and robust option but it is not available for public use yet.

You could use a Mail Rule in Mail.app. Select the DEVONthink Pro Office menu item > Install Add-Ons… > 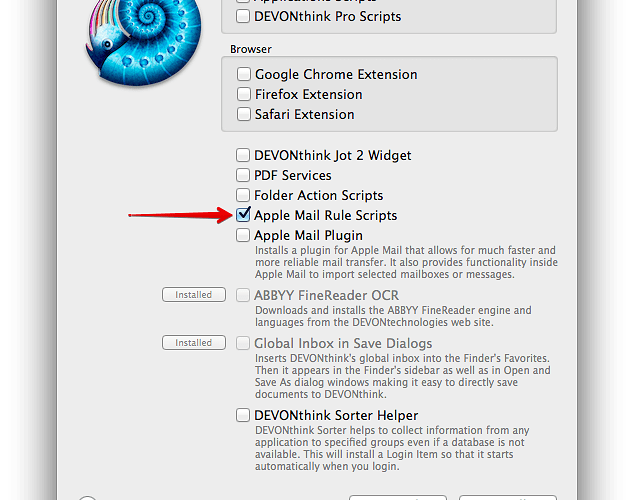 In Mail.app’s Preferences > Rules, you can add a Rule and choose an Applescript to run. 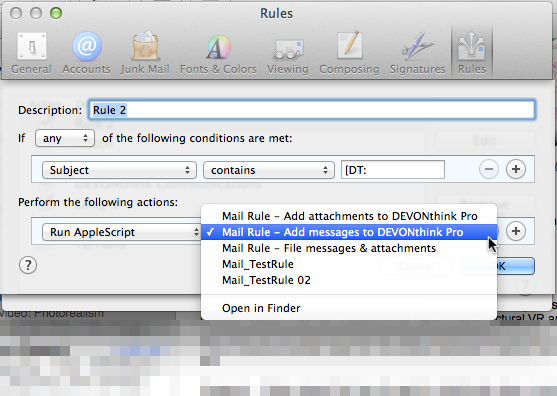 NOTE: Mail Rules are not always consistently triggered (and this is Apple’s issue), but it does work well enough, in general.

Thanks. I will experiment with this option. It worked once so far, but I have not received the second test email I sent out.