I’m considering using the read/unread status of an item to track if I… read something I kept for later use.

I tried it, but there’s actually something that doesn’t fit this workflow: the read status is set once an item is opened. However, I may not have actually read but just open it for adding a comment or setting other things. This status is more an « opened once » status that a read/unread status.

I wonder if there is an option to tell DTTG to not set the read status automatically, I’d like to set it myself manually.
I searched for such an option but have not found one.

When an item is viewed, it is considerered as read.

PS: Something being read is a human convention. A computer has no idea if a file is merely being displayed or if someone is actually reading the displayed content. And the behavior in DEVONthink not only has been in place for a long time, it is also the same behavior found in other apps, e.g., Apple Mail.

You could potentially set a tag, say To Read. If a file has that tag, a smart rule could set it to be marked as unread. For example… 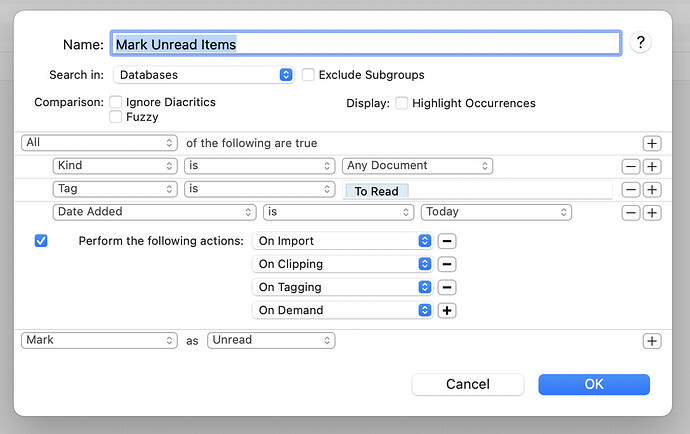 Totally agree with your precision about read/unread state, DEVONthink cannot determine it automagically. Hence my question about a possible option for disabling the automatic state change and let me set it when I want.

I’ll find another way to implement my workflow, thanks for your feedback @BLUEFROG.

I agree with your idea and would also welcome a setting to do this manually. A workaround could be to set the status as “Mark Unread” “On Open” for unread items - that would do it (although ‘hackish’)

Hello, all.
This behaviour of items automatically becoming marked as read has been the thing I’ve been wishing the most to change (that is, to be able to disable) in DEVONthink.
Last year I searched this forum about this topic and found multiple threads dating back to 2009 where other users have stated that they were having the same issue.

Something being read is a human convention. A computer has no idea if a file is merely being displayed or if someone is actually reading the displayed content.

I was going to write that, in my opinion, the word “seen” would have been more accurate than “read”. And coincidently, I then happened to see this comment from @ReliStuPhD in a thread from 2012 expressing the same opinion:

“So it makes assumptions? Perhaps if the tag was “viewed,” I could understand the action. As it is, “read” is a poor choice of words, especially since a data aggregator of this kind is very much designed for data that is to be “read.” If a program cannot anticipate what I am doing with my eyes, it should not decide for me.”

Thank you for the suggestion, @BLUEFROG. Despite the fact that there might be ways to workaround it, it seems more work than necessary and doesn’t feel quite right.

Many E-mail programs behave exactly the same as DT: they remove the “unread” flag if the user has “seen” the E-mail. So it may be a bad name and “unseen” might be better, but it has a tradition

But I also seem to remember that sometimes a configuration seeing allows to influence that behavior.

I think this has been discussed many times in the forum; I know I brought it up earlier in the year and found lots of topics about it. My solution has been to set a tag of “TBR” (To Be Read) on items. I have a smart rule that applies it if an item that is marked unread is moved into my database. That tag remains in place until I’ve removed it manually myself.

Someone else in the discussion I’d seen uses the flag function, but I have hundreds of unread files and don’t want flags everywhere so I didn’t do that.

I did try using the reading list but it uses the read/unread status so is no good.

Whilst I understand the reasoning behind this “setting”, it drives me mad that we cannot amend it ourselves. I was trained with email in Outlook, and Outlook can be set to leave items unread if only viewed in the reading pane - to mark as read you have to double-click to open the email in a new window. It’s how I’m used to working and to me it means anything marked unread hasn’t been dealt with yet. My tagging system mostly works, it’s just a bit annoying to have another tag.

The next release will actually add a new preference to control this.

The next release will actually add a new preference to control this.

I see this was released days ago for DEVONthink To Go.

This thread is in the DEVONthink To Go section of the forum.

Were you referring to this release, or does this mean it will also be released for the desktop version?

That’s great news, and I am really glad with this new option.
This is what I hoped for, perfect