Sidebars Do Not Match Databases On Application Open

It seems that whenever I close DevonThink3 with multiple databases open, and then re-open the program, the sidebars do not match the database content shown in the Item List and Preview/Ediit panes.

I have not found any other steps taken to duplicate this behavior besides quitting and restarting DevonThink3, but I might be missing something that I take for granted in how I have my windows/databases set up. I have tried closing and re-opening each of the databases with DevonThink running, but that hasn’t seemed to affect the behavior.

This is fairly easily dealt with by simply clicking on the groups in the navigation sidebar that I want to work with, thus switching which database is shown in the Item List and Preview/Edit panes, but it causes some momentary friction when first opened, as the names of the databases for each window show in Mission Control as whatever is open in the Item List and Preview/Edit panes.

the names of the databases for each window show in Mission Control as whatever is open in the Item List and Preview/Edit panes.

Can you clarify why you’re referring to Mission Control here?

Sure thing - I only mention Mission Control to clarify where in my workflow this issue is causing a moment of confusion for me, which is mostly when switching from another program to DevonThink. When I switch between applications using Mission Control, the smaller version of the windows are hard for me to tell apart visually, so I rely more on the name shown when I move my cursor over the window thumbnail to know which window to click on. Those names are based on which Database/Group/File is open in the Preview/Edit pane (if any) or the Item List Pane (if no file is selected in the Item List).

So, to provide a specific example and hopefully show what I mean without reference to Mission Control, Iet me describe a quit and re-open and post a screenshot (limited to one per post as a new user, I can provide more if helpful): 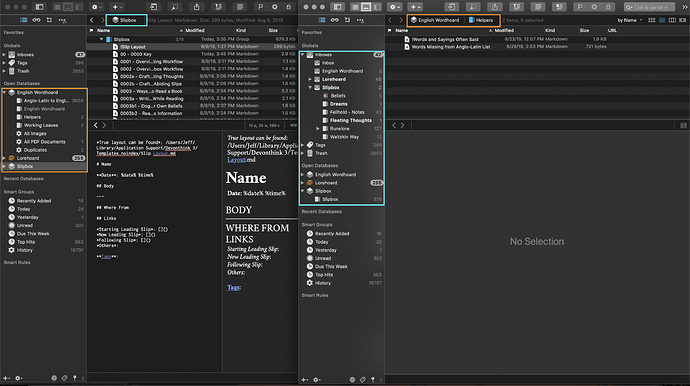 It seems like the program is remembering which groups and files I had open as well as how I had my Navigation sidebars configured, but is not retaining which sidebars were with which groups & files in the same window.

Thanks for the clarification.

Is Preferences > General > Automatically expand sidebar enabled or disabled when you quit and relaunch DEVONthink?

I did not have it enabled, as my understanding of that preference is that it automatically expands the full hierarchy only for the group/file in the item list and edit/preview panes, whereas I sometimes leave expanded multiple hierarchies (for example, both the database’s inbox with subgroups and one or more groups within the database).

90% of the time this makes a minimal difference, so I might be better off with the preference enabled, but it’s a slight change from the behavior I got used to with DevonThink2. I certainly wouldn’t rate this as an especially high priority thing to resolve, as it might be wholly idiosyncratic to me and the workaround is minimal - thanks very much for your responsiveness so far.