Is there a way to capture Siri reminders directly to the Global Inbox, something similar to the way reminders can be scraped in by OmniFocus?

My goal is to use my DevonThink Global Inbox as a ubiquitous distribution point for all captures. Most of my tasks and ideas begin with telling Siri to remember something. Much of what gets captured simply needs filing in my database, and doesn’t need to end up in OmniFocus. Thanks for any suggestions.

I’m a relatively new DT user, and I’m wondering why I didn’t make this step years ago.

I have been trying to figure this out also. I had worked out a system that would append text to my TaskPaper files using IFTTT through Siri, but can’t seem to find one for DevonThink. I could index the file but it wouldn’t give me separate notes.

I looked at IFTTT again, but no recipes exists for DevonThink, so I decided to create a new one. The recipe is pretty basic. It just looks for any new Reminders, and if it finds one it creates a new text file on Dropbox. So I just indexed the Dropbox folder and brought the text files into DevonThink.

So you create a reminder through Siri, IFTTT picks it up and places it into Dropbox, and then you index the Dropbox folder.

So it’s not a perfect solution, but does eventually get things into DevonThink once you are at your Mac and can update the indexed files. Hopefully someone can find a better way.

I ended up doing something different, but with similar results. I’m currently using Drafts, from Agile Tortoise, to scrape in iOS reminders. I then take a look at the day’s list of notes occasionally and choose where to allow drafts to throw them. This is usually directly to an OmniFocus task, into some type of communication like email or message, or into my nvALT folder on Dropbox which is indexed into in DEVONthink. I also created an action that allows me to select a list of Drafts notes and throw all of those at once into the nvALT folder.

What I haven’t figure out is a good way to get the notes automatically from the nvALT folder into DEVONthink, and deleting them out of nvALT (or archiving them for safety).

Have you looked at Hazel? It could monitor your folder in Dropbox, and then move the file automatically into the DEVONthink inbox in the Finder.

Thanks @evank. Yes. I failed to mention experimenting with Hazel. I tested a script that copied the nvALT folder contents into a specific DEVONthink database. I had it set up to run once a day, but if the computer was off, it wasn’t running, so that bugged me. I should probably revisit this possibility and have Hazel run several times per hour. Another thing I remember not liking about the script was that it left the files in the nvALT folder. If I set that up again I need to figure out how to tell Hazel to delete them after the transfer.

The dream feature I’d like to see happen is a function within the DTTG app that scrapes directly from iOS reminders, similar to the function in OmniFocus, or Drafts. This would make DTTG the capture point for all my ideas, projects, assignments, etc, and would be essentially the way I use the Sorter on my office iMac. How do I make a feature request?

I had thought about using Drafts also but hadn’t used it in a few months. Then this popped up on their Twitter feed yesterday. It could prove to be an interesting capture tool. 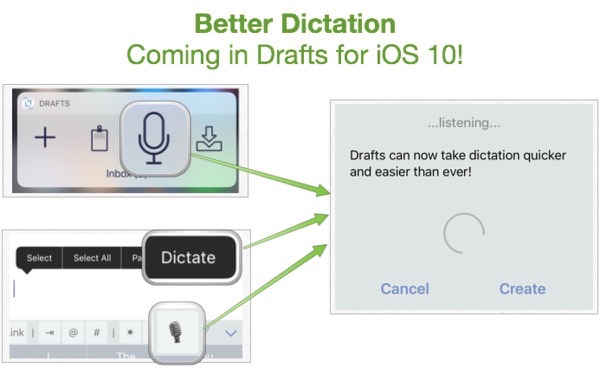