I’ve created several smart groups in which I see the pdf document corresponding to my selection criteria.
All the documents (PDFs’ files) are indexed documents in my DBs.
The question for me is is it possible to export the smart group content as a list of document which then I can compare with another list coming from Bookends?
My aim is to sync DTP and Bookends (in which I have also smart groups) so once I’ll found missing documents in Bookends I’ll like to complete it.
Perhaps there is another way to do this sync but I don’t found it yet so if you have any idea to realize this thanks for sharing

The question for me is is it possible to export the smart group content as a list of document which then I can compare with another list coming from Bookends?

Data->Table of contents will produce a neatly formatted html hyperlinked list of documents.

Scripts Menu->Export->Customizable Metadata Export will produce a csv list of the selected files and their metadata.

A TOC is composed of links to selected files. Simply viewing s art group (or any list of documents) and asking it to create a TOC won’t necessarily work. You must view the smart group, select ALL (or the desired) files (e.d., ⌘-a) and then ask for a TOC file.

If I understand your need correctly, the TOC document should fit your needs exactly. It will look like this: 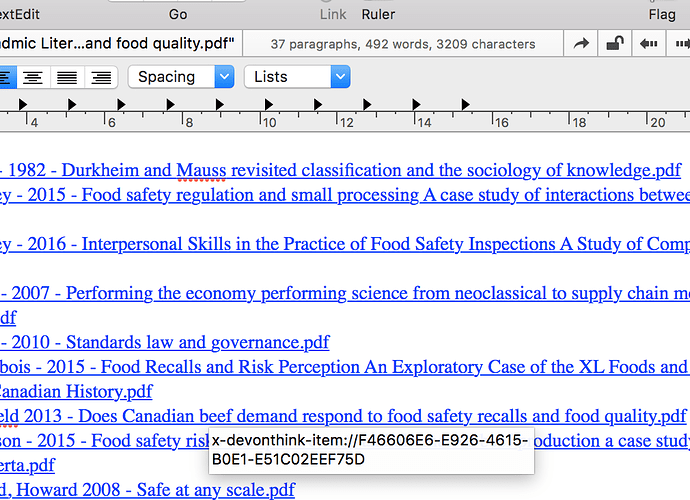 If you aren’t sure where the TOC files is being created, try searching (⌘-Shift-F) for a file named “Table of Contents”.

The names in the TOC will reflect how they appear in the DTPO interface. If you’d like you can just remove the file extensions from the names and they won’t appear in the TOC.

There is a setting in Preferences>Import>Titles called “Filenames Without Extension” which will leave out the extension for any newly added files. This won’t affect files already added to DTPO.