smart groups based on title

Just create a copy of the file ~/Library/Application Support/DEVONthink Pro/Smart Group/All Words.scpt. Rename the copy, e.g. to “All Words In Title.scpt”. Then open the copy in Apple’s Script Editor and replace the line…

My problem with this line (or variants of it in several “Smart Group” scripts) is that I end up with duplicate replicants. For example, if I have one that’s searching for “Plurk” and I have a title with “Plurk” and “Plurkussion” in it, I get two replicants in my “Smart Folder”. How can we modify the script to only make one replicant per original matching record?

These are referring to the same item as far as I can tell, as I wouldn’t have duplicate named journal entries. 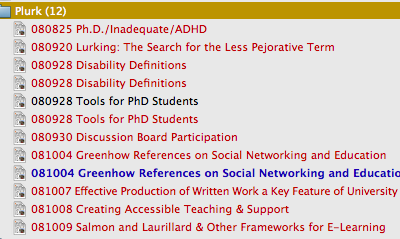 Here’s the source folder where the original notes are held. 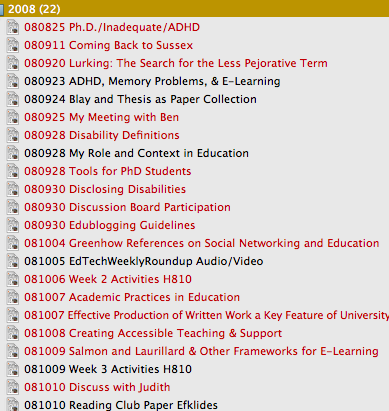 This is a research journal so every title starts with a date and then a title. The two together are a unique, so there never will be two entries titled “081008 Creating Accessible Teaching & Support”

I did notice the odd combination of colours. Why one was blue and another black, I don’t know, so I tried an experiment. I removed everything from the Smart Folder by selecting the contents of the folder and hitting ‘delete’. The originals in the 2008 folder, of course, were still there. I then clicked on the Smart Folder to force it update and I ended up with 10 items instead of 12:

Notice that there are still duplicates but only one and I can’t explained why “080928 Disability Definitions” is duplicated. Its comments field has “Plurk, disability, H810, social model, medical model, definition, Seale, Oliver”

It’s hard to tell if this is a rare bug or related to the database. If you could send a zipped version of the database (assuming the archive is not too large for emails) to our support address, then I’ll check this. However, v2 will feature real smart groups without scripting and with an easy to use interface.

However, v2 will feature real smart groups without scripting and with an easy to use interface.

Thank goodness! That would be so nice if it was something similar to Bookends smart groups or iTunes smart lists. Do I have long to wait? If so, I won’t worry about it for the moment. It’s annoying enough that I wanted to modify the AppleScript to force it to produce a unique set, but if V2 is just around the corner, I can live with the problem.

V2 will be released later this year.

No kidding! The only time I ever lost data in DTP was after trying some things with v1’s pseudo smart groups several years ago. Not sure they were the cause but I’ve never tried using 'em since.

V2 will be released later this year.