Hi I’m trying to setup a workflow with smart rules. The File is imported into a folder is run through OCR and then gets filed to an other folder depending on the content of the file.

if i have a folder structure of parallel folders:

…/ [Placeholder for the creation date of the Fille]

As far as i know “…/” should move out of the directory SCAN INBOX and then choose the correct folder from there. Unfortunately DEVONtink creates a folder …/ inside of SCAN INBOX and puts the corresponding folders inside of it…

is there a solution for this?

A location beginning with / is an absolute one, otherwise it’s relative to the current location and this seems to work as expected over here. A screenshot of the smart rule would be useful. 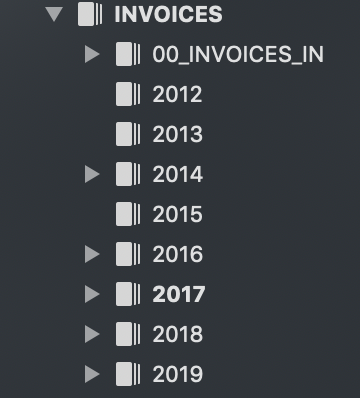 With this long absolute path it works, but how would I type a relative one without a " / " ??

this works as long as the folder is at least one level higher.
E.g. the relative path of a file in “invoices” would be “2019”

But if i have a file in “00_INVOICES_IN” I would have to go one step higher in the hierarchy and from there go further. so in this case this would be “one step up”/2019.

I’m confused. What’s wrong with the absolute path you’re using before the placeholder?

a relative path would make smart rules more flexible. i could duplicate the rule and use it on a different folder. it is a lot easier and faster to type a shorter relative path than a long absolute one…

There are more factors in play that could necessitate creating multiple rules. Criss would have to assess what changes will or won’t be made in this respect.

ok, thanks, so for the time being the way to go are absolute paths?

For the time being, yes. Criss may have more to say on the matter tomorrow, and I can’t speak for Development on this. I can only suggest things that may be helpful at the moment

An other question, is it possible to organise smart rules in folders too as they might become quite numerous

Not at this time, but it’s under consideration.

But if i have a file in “00_INVOICES_IN” I would have to go one step higher in the hierarchy and from there go further. so in this case this would be “one step up”/2019.

I’m curious how your database actually looks like currently and what you would like to achieve. Usually filing is for new, incoming stuff located e.g. in the inbox or at the top level.