It would be great if DEVONtechnologies could fix, or re-enable this.

The documentation has always stated that the Dock and the Sorter could not be on the same side.

While I too liked having both the Dock and the Sorter on the right side, …

With Dock on the right, how do you mange to keep it and icons from interfering with each other? I quickly abandoned righty Dock usage because of that highly bothersome interference. A lefty Dock works best for me.

With Dock on the right, how do you mange to keep it and icons from interfering with each other?

Which icons-on the Desktop? That’s easy-I never, and that’s no exaggeration, never keep any documents or folders on the Desktop.

Substitute end for start to pin it to the bottom, use middle to change it back to the default. If the Dock is on the bottom, start puts it on the left.

I didn’t think fixing the bug of having the sorter on the same window edge as the dock would cause a problem, so I will unfix the fix for the next release

I will unfix the fix for the next release

Thanks for the bug (un)fix! 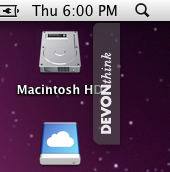 Not exactly what I was looking for.

Is the dock set to auto hide or is it out of view in the snap shot?

Sorry. It’s just out of view. Here’s what it looks like with the Dock in view.

Whilst in your case the dock is psychically only taking up a small part of the screen height, the Sorter is using the system information that says the dock is full height. Unfortunately at present there isn’t a way to get a greater granularity of the docks size.

So, you’re saying that the “bug” that caused the old behavior was really a work of genius, and cannot be replicated?

Thats one way of looking at it

Unfortunately the previous behaviour which worked in your case caused its own problems in other circumstances. I will see if I can find a way to resolve both cases.

It’s been awhile since I haven’t been able to put the sorter on the same side as the dock (and have it on the actual edge of the screen - see pics above for the current behavior), and I have to say that I’m really missing the way it used to work. Now, I’m always moving the sorter tab around the screen, trying to find a place where it doesn’t interfere with other windows, but it’s always getting in the way. Please, please, please fix the sorter so it works like it used to.