I’ve noticed that Sorter doesnt always shows up.
This is how it is set up: 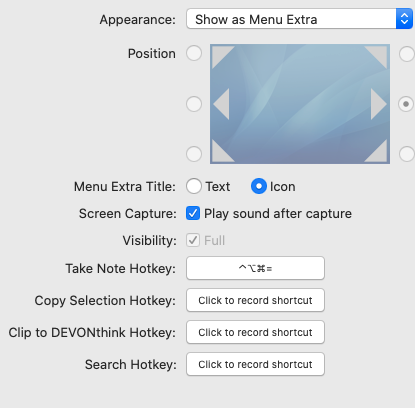 If Devonthink app is opened recently , when I click ^ + Option + CMD + = Sorter displays and I can enter notes there.

But after some time (I cannot quite figure out what triggers this) , when I click the keyboard shortcut, the icon in the top bar flashes, but Sorter doesn’t pop up.

sometimes even if I switch focus to Devon app or quit/start Devon app it starts functioning.
But still it’s inconvenient for ex after working couple hours and switching to diff apps, and then I need to make quick note and sorter doesn’t show up.

Another thing that I’ve just noticed on the second laptop: I tried to configure the same shortcut for the Sorter and I got this: 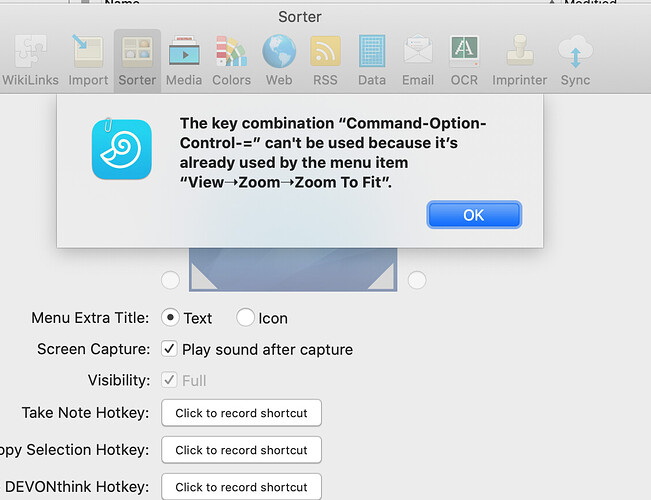 while this is the View/Zoom menu: 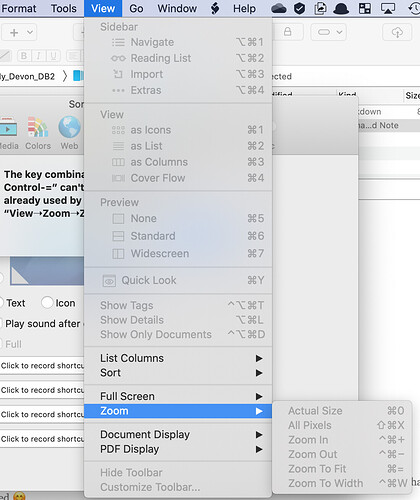 Try Control-Option-N. Does that work?

Ctrl Opt N works , but that one I use as global shortcut for other app.

This is not a big pain point , I can figure out another keyboard shortcut …

Is there some way to catch log output when this happens, so you guys can dig into and figure out the problem.
I’ve changed the keyboard s/cut but I observe the same behavior.

But after some time (I cannot quite figure out what triggers this) , when I click the keyboard shortcut, the icon in the top bar flashes, but Sorter doesn’t pop up.

I have managed to reproduce this issue, it appears to be a problem in a 3rd party library. Some of the modifier keys appear to be lost during the comparison with already used key short cuts. In your example ^ + Option + CMD + = matches with CMD + = however if you removed the CMD key from the shortcut and used ^ + Option + = it would work. We will aim to get a fix for this as soon as we can.

Thanks @aedwards
Some week ago I’ve changed the shortcut to ^ + Option + /.
It worked Ok for a week but then stopped (after restart of Devon works again).
I think that shortcut is being “caught” properly but for some reason not alway sorter pops up.
I conclude this cause the sorter icon gets blue when I click the shortcut, but still sorter dialog box doesnt display on screen.

Hey guys, @BLUEFROG / @aedwards I think I found what is the issue here, and probably it’s not combo of keys: actually it’s multiple desktops.

On my mac I have two displays/monitors (one from laptop and another external monitor). On first I have 2 desktops , and on the second 3-4.

So for some reason, sometimes, when I fire the keyboard shortcut the Sorter Popup opens but on a desktop that is not one of two currently active. So If I go to another desktop then the sorter is opened there. I cannot figure out what causes this.

As a, kind of solution: on the current desktop you need to move the mouse down on the desktop so the dock gets displayed. After this Sorter will display on that desktop.

Hope you find this input useful.

Thanks for the additional info, I will try this on multiple monitors. The Sorter should open on the display where the mouse pointer is located.

Can you clarify this?
Thanks!

in Mac OS there’s concept of Desktop (number of desktops can be seen if you activate mission control)
so in each desktop you can put windows from different apps. 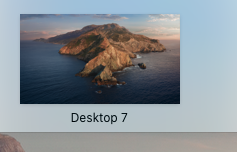 On first monitor I have two desktops , on second monitor 3-4-5

Another pic (taken from Apple): 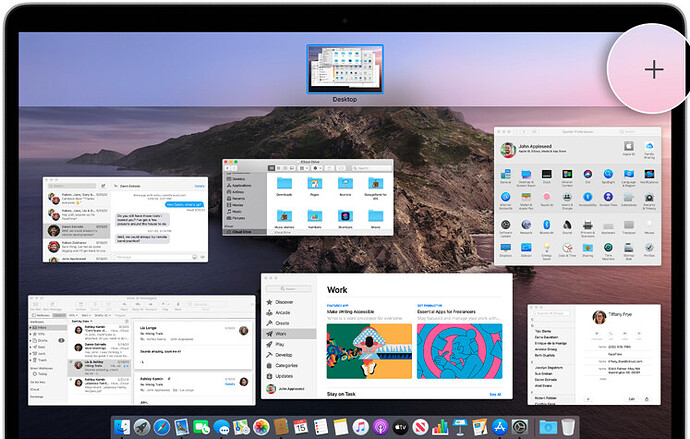 this guys has only one desktop obviously …

Let me know if further clarification is needed

Interesting… I have never seen or heard that you could segregate Spaces per monitor.

I’lll have to check that out.