Does Devonthink’s sorter, that sits on the side of the desktop, work in the latest release?

I can’t seem to drag blocks of text into it and have them go into the universal inbox.

The global inbox is disabled in DT Beta 3. So, although the inbox icon in the sorter is ostensibly linked to the global inbox, it’s just a black hole for now. At least that’s what I gathered from a conversation elsewhere in the forum.

Wait on trying the Sorter at least until the next release. I just lost a whole bunch of PDF files I had dragged there.

It is the universal inbox that doesn’t work yet. If you drag the inbox(es) [or a specific group] from your database(s) to the sorter and then drop files into one of those inboxes, files are safely imported to that database.

The Sorter seems to me to be excruciatingly slow, and ties up my machine for a lengthy time if I feed it anything ambitious. I’m presuming it’s a work in progress?

What exactly is slow? I don’t feel any slow-down here on a 2 GHZ MacBook.

Thanks for the update about the universal drop box. I suspected that I had missed something obvious.

What exactly is slow? I don’t feel any slow-down here on a 2 GHZ MacBook.

I get the beach ball quite often in DTPO2 on my iMac 2.8GHz with 4GB RAM - but some of that might be because my DB is on a removeable drive. I’m considering moving it back to the HD to see if that makes a difference, but first maybe a bit of maintenance on the DB.

Eric - things seem to have improved dramatically with beta 3. I don’t get the beachball anymore. Matters mightn’t have been helped by the fact that I’m using a 12" Powerbook with 1 gig of RAM - although DTP2 in general flies on this archaic setup.

A question, though: I tend to put the Inbox of different databases into the Sorter, so that I end up with a series of blank squares (no icon) with the label “Inbox”. Not very helpful. Will there be a way to customise descriptions?

You can, in each database, give a descriptive name to it’s Inbox. Won’t harm the functionality. 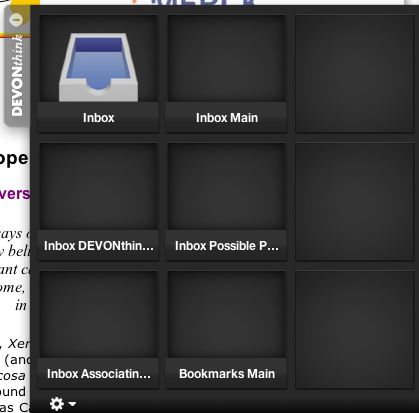 That helps. Thanks, Bill.

To keep the length under control, I’ve renamed mine in the following manner: Attic In, Vault In, i.e. dtbase name followed by In to denote inbox. Cure the problem of the dreaded ellipses.

Wait on trying the Sorter at least until the next release. I just lost a whole bunch of PDF files I had dragged there.

If you look at
/Users/username/Library/Application Support/DEVONthink Pro 2/Inbox
you should find the files you dragged into the inbox. (username is your username!)

Thanks everyone for all the quick and thoughtful replies. This is a great community.

I was just wondering if there’s a way to change the position of the “global” Inbox in the sorter? For example, with reference to the inserted picture from Bill_DeVille, replace the (global) “Inbox” with the “Bookmarks Main” folder?

No, the global inbox is and will be hardcoded to that position. That way, no matter what happens your muscle memory can work to reliably drop something there.

Thanks for your quick reply!

I thought I read somewhere that you could resize the boxes in the sorter. I couldn’t figure out how to do it. Is it possible?

No, you can only resize the window so it will contain more or less boxes but not the scale of them.

If you look at /Users/username/Library/Application Support/DEVONthink Pro 2/Inbox you should find the files you dragged into the inbox. (username is your username!)

acl, you are the greatest. Learning that I didn’t waste my time & effort using the Sorter was by far the highlight of my day. Big, big thanks!