I tried changing the Peference destination (see attached screen shot), but it has no effect. 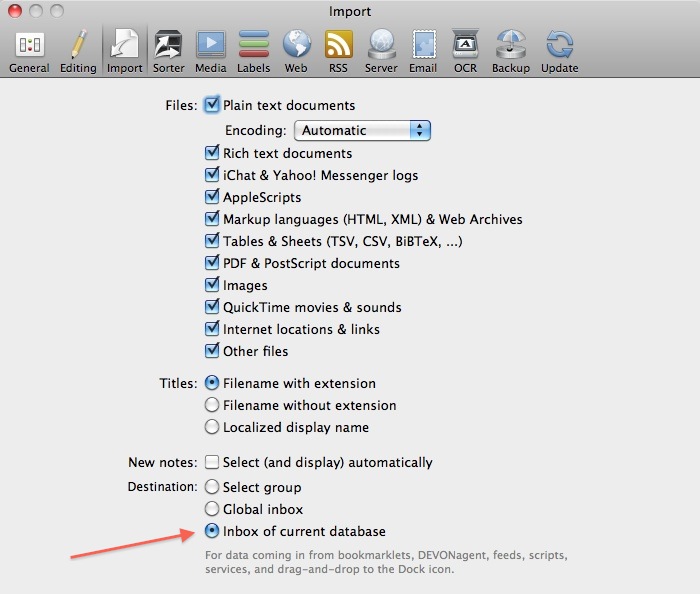 Folks I was able to make it work. I had to restart DTO after making the Destination change to the “inbox of current database”.
Thanks

Worked for me as described without restarting, when a window for the database whose Inbox I was importing to was frontmost.

hum, I must have done something wrong, but it seems to be working now.
Thanks so much.
JMM

Apologies if this has been asked before; I’ve just purchased this and so far, so good.

On the Side Sorter, I see the Inbox (Global); however, there are also eight blank…drawers(?). I have six databases, and I’d like to create an inbox for each database-this way (I hope) I can drag stuff to “Latin American History” inbox, and when I opened that database, the material would go automatically into that database.

So: (1) how to do this? and (2) if I import material to the desired inbox, would it also appear in the Global inbox? (3) Under the “Services” feature, would there be a “Save to Latin Amer History Inbox” as a separate choice? (sorry if that last question is a bit unclear)

If you have dragged multiple database Inboxes into empty slots in the Sorter, all named ‘Inbox’, that can get confusing.

Note that you can rename your datbase Inboxes to give yourself a cue as to which database each is tied to, before dragging them into empty Sorter slots. They will continue to function well, and you won’t have to play guessing games.

Yes, they all have a name corresponding to the database I want to drag the info into-I like that I can do this, since most of the info for db1 is unrelated to db2, etc.