Stack V5: a rather configurable script for taking snippet-notes while reviewing literature

This is the fifth iterations of Stack scipt ( from V1 to v4 ) that I use for taking multiple atomic notes while reviewing academic literature.I hope that it might be useful to some forum members.

What the script does: take atomic note on cited text (or blank note) and name it with a unique identifier, save all notes taken from a literature/source document into a source-linked group. The scipt can insert different backlinks into the note, and tag the note by multiple matching methods and replicate it to different groups (at creation or later) - all in one go. Finally, the user can re-configure how a note is created anytime without changing the script.

The major changes in this version are all about user-experience:

This is what the script does when the user selects a piece of text and invokes Stack: 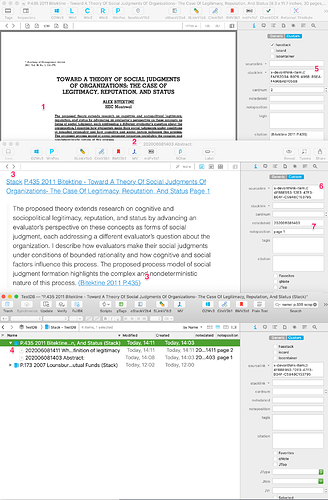 Right after a note is created, or if the user invokes the script later (e.g. after finish writing the note or review the note after a while), the script will suggest a list of tags that is from the source of the note - because the note is linked to its source when it is created by Stack 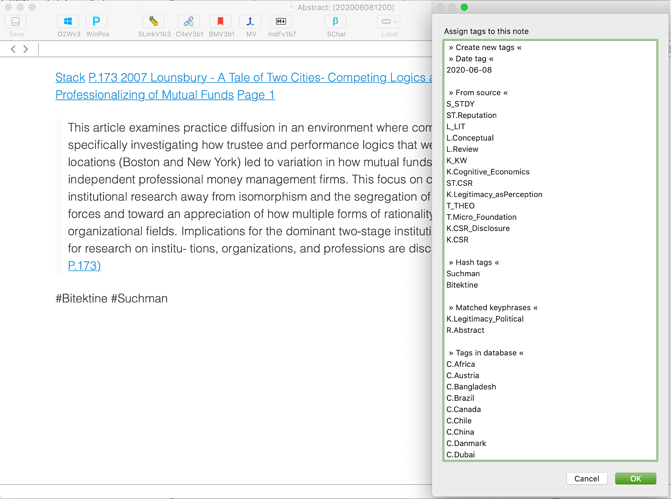 If “Create new tags”" is one of the chosen item in the tag list, user will see another dialog box after the other selected tags are assigned to the note: 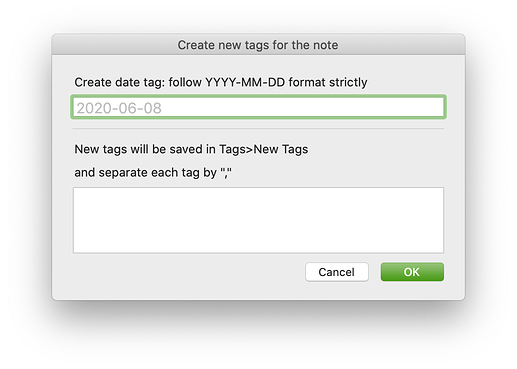 After the tagging, the scipt shows a list of groups in which the note can be replicated to:

Groups will be shown in the list when their cmd field “iscontainer” is checked. 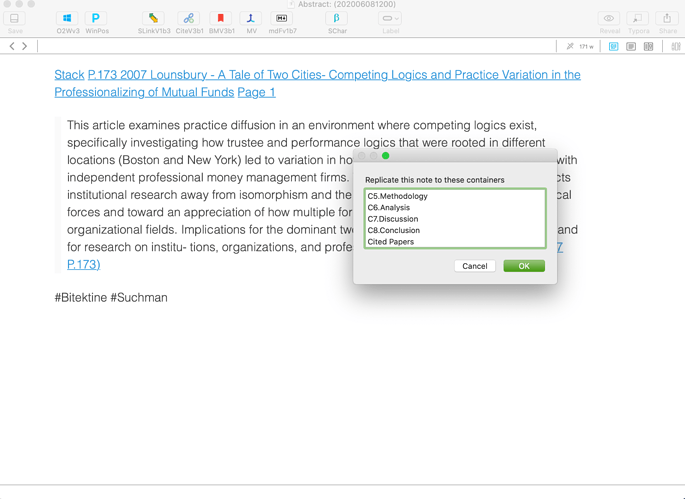 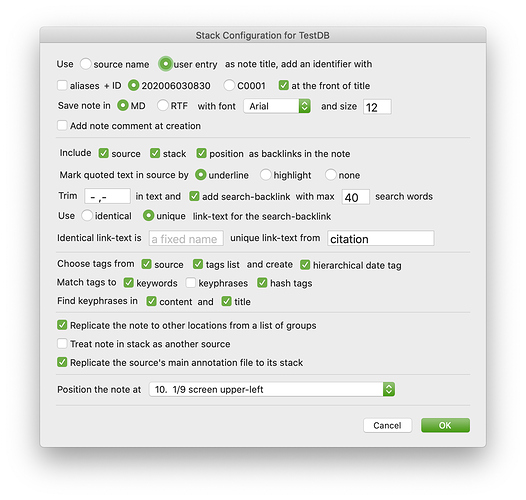 The requirements to run Stack 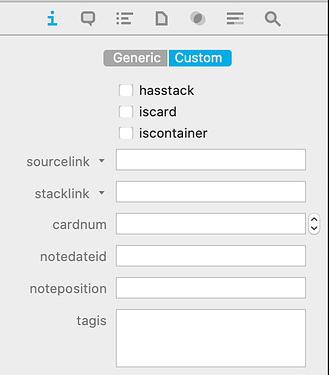 The exact name of fields and their datatype are as follows:

The design is frozen. This script is almost perfect for my purpose. But I’ll post bug fixes if I or anyone finds one. Cheers.

A script to choose notes from stack. When the user is in a document and run this script, a popup will be showing all notes/document in its stack.

A script to put other documents into a source-stack. While reviewing other articles, the users may think the article is related to a previously reviewed article, this script will search for the other documents by name and put the currently reviewed article into its stack. Source-stacks for those documents will be created if they don’t exist yet. In a sense, the literature is now linked to each other by having a replicant in each other’s stack - similar to the concept of Hook app.

Atomic notes are snippets that focus on a single idea/concept/argument, etc. But there are times when I want to review all notes that have been taken from one literature. I can go to the stack, sort the notes by their dateid or positionid, and use MergeView Script to create a consolidated MV file, and edit any individual notes right in the MV file. Similarily, I can merge the notes under a tag or tags-combination and take a consolidated review by the script.

Thank you very much for your wonderful script! Can you use it to add not only text from pdf, but also a picture that is present in the text.

If u are referring to image with a link back to the pdf, I think it is going to be tricky, if not impossible, to achieve. For rtf, I think u can just take a screen snapshot and paste the image to the note after the note is created.

I use the script to create markdown note, and use this script to capture the image with a image link to an image asset group in DT. The script is clumsy, but it works:

Another script to work with Stacker

What the script does: the user can copy multiple selected texts for citation links during a literature review. The text and links will be paste in a correct format to markdown and rich text notes automatically. I wrote this script to work with the StackV5 and TaggerV5. The major features of this version: User can keep any number of the selected text and use those texts as citation links in markdown and rich text notes at any time - even after restarting DT. The script will paste the right for…

Clicking on the bookmark link will bring you to the location of the picture in the source.

Thank you, for the useful tools.