A suggestion for a smart rule action:

One could set up a smart rule that watches the Inbox for imported items, then on import, moves them to the group the user is focused on.

How would this be determined if you have multiple windows open?

I presume it would be the window that has the user’s focus on it. (The window where the dots on the upper left are colored, not gray.) Like our discussion in the other thread on filing into the current group…

…the user would need to be very intentional about what got imported into the watched inbox/group and when it got imported.

…the user would need to be very intentional

Not only that but they’d have to be aware of the frontmost window and current group. While rabbit-trailing in a browser or the filesystem, dropping things into the Sorter, etc., it would be easy to forget where you were. This could lead to many misfiled things.

or the last window active last 5 min ago

But that if I was otherwise occupied for 6 minutes? Or 9…?

Now that I have you here. How the hell do I make a smart rule to automatically “apply rule”?
This is not working.

What exactly isn’t working?
You’re not showing the target of the smart rule, but have you dropped a file into it?

It works but I have to click “apply rule”
Is that the way it works?

Yes! I have dropped/imported IMG files into it.

“search in” is the inbox where I want it to look when IMG file is imported there, then once it has been imported I want the IMG files to move to “pictures” 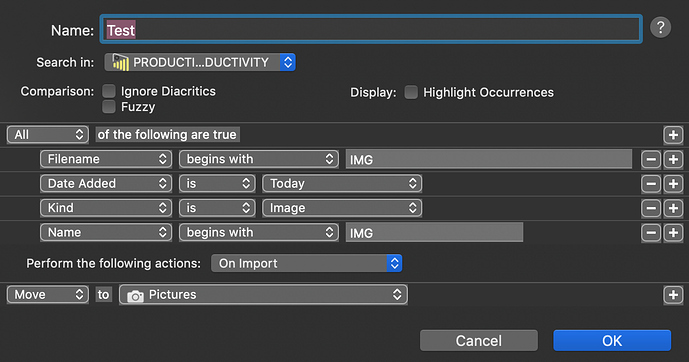 I have dropped/imported IMG files into it.

Into what… the target folder?

When you select the smart rule, do you see matching files?

By the way, Filename and Name are redundant here.

Yes the target folder(search in)

Yes I see matching files, as I said it works but I have to click “Apply rule”

That’s not an On Import event.
That would more likely be an On Synchronization event.

Ah I tried everything except that one. Yes that did it.