OneDrive seems to be the best offer for Cloud storage, nowadays.
Could you possibly add support for OneDrive?
Or just for the iOS 11 File Providers, so that any configured storage could be used.

Sorry, but there are no current plans to add support for OneDrive (or any other cloud providers). If OneDrive natively supported WebDAV, it could be used. Also, you can check this out: blog.devontechnologies.com/2018 … with-sync/

Interesting idea.
But we don’t need dubious subscriptions apps that are “ready for iOS 8”.

We have iOS 11 and soon 12.
There we have the Files app and their File Providers!

OneDrive can be used like local storage!
As can any app and cloud storage that includes this integration.
Please add support for iOS 11 File Providers, as now numerous app do! 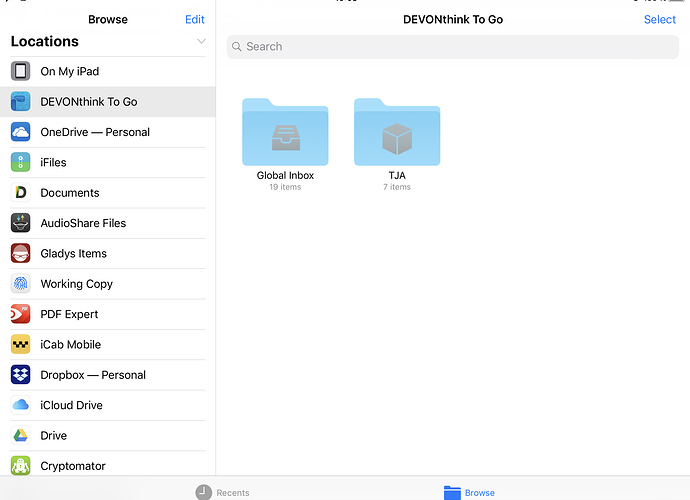 And the best is, you already have and use the source code for this, as DTTG already implements it’s own File Provider!
Just use this!

Please note that file providers are for storing single files and give access to directories. They are not meant or capable to transfer many thousand files as needed for a sync.

In earlier times all cloud service providers supported the universal WebDAV standard. Some of them abandoned it in favor of their own APIs which basically means we’d need to write a substantial part of the sync over and over again for each of these APIs.

This is sad, I just tried to sync with WebDAV to OneDrive with no success.

The error message is too many http redirect, but I am still researching in hope syncing to OneDrive will work.

I used this tutorial for the first trial:
https://winscp.net/eng/docs/guide_microsoft_onedrive

As I understand the problem with for example Dropbox (but also Google Drive) is that it does not play nice with the way some Mac applications which use file Packages or Bundles. For a database like DT it is important that when opening the database everything is consistent in that Package.
This package is not like a Zip file, it is more like al Folder (in fact it is). Before opening the database you need to make sure everything in the database is synced 100%, which in the case of OneDrive is not always easy to know for the application. Also OneDrive does not have an API like Dropbox has, which is one of the reasons that for example Scrivener uses.

In short Putting as database like DT files on a synced share is not a good idea and for developers it probably is hard or maybe even ‘impossible’ to create a reliable integration with OneDrive.

Yes, but my main goal is to use DT’s WebDAV sync method with OneDrive, not using the synced file as the location in which *.dtBase2 resides in.

Also OneDrive does not have an API like Dropbox has
[…]
and for developers it probably is hard or maybe even ‘impossible’ to create a reliable integration with OneDrive.

Is that the case? Dang, I just know that OneDrive is that limited. Dropbox is darn expensive though

there are some commercial WebDav vendors out there. off hand know nothing but i recall discussed on this form. search here and the internet i guess.

I just found out that Fastmail’s Files supports WebDAV! Just set it up and succeed! Adios Dropbox!

I’ve been looking for cloud storage solution that support WebDAV, and the solution is one of my children that hides under the table…

good for you. I am also a fast mail customer. i am sure they will give you good service.

I tried pCloud, and really want to like them. Relatively cheap, has lifetime purchase option, and works with Infuse too. But oh the latency and speed. I live in Indonesia and have gigabit ethernet, pCloud only reach 800KBps max for upload and 1.2MBps download. They only provide server in America and Europe region.
Too slow for my needs.

Best service to sync is Bonjour

Best service to sync is Bonjour

If you remain on the local network, and keep the ‘server’ computer running it is very good indeed. If you want to use data outside of your own network Bonjour will not work. It is the reason I use WebDAV on my local network en use a VPN to connect to my network when working remote.

Yes, but my main goal is to use DT’s WebDAV sync method with OneDrive

OneDrive does not support WebDAV, it is or was based on WebDAV, but this may only be the case with the OneDrive for Business which uses a Microsoft SharePoint infrastructure. There may be ways to connect to OneDrive using WebDAV, but on MacOS I was not able to get this running. Even if you would get it running, it probably would be very unreliable.

Is that the case? Dang, I just know that OneDrive is that limited. Dropbox is darn expensive though

Dropbox has an nicely documented API, which means developers can implement the services in a reliable way (I’m not sure if DT uses the API though). OneDrive is not documented that good, also it changes regularly which makes integrating OneDrive harder. Dropbox will set you back EUR 120,- a year, and gives you 2TB storage, I don’t find it that expensive compared to other services. I do not particularly like the Dropbox software, it is floaty and uses more memory than I would like.

Using OneDrive would also benefit me, because I get 1 TB for free because I need to use Office365 for my work, but I started to accept that paying for services that work out-of-the-box makes me more productive over time than having to tinker with services that don’t work as I would like.

I use Bonjour and WebDAV local, and Dropbox for “cloud” exterior use. I prefer to not administer remote access to my internal WebDAV server, but of course could do like you do.

The benefit of having two local is that Bonjour runs first and fast, and I can carry on working with the files even though WebDav still working.

We do use the Dropbox API.

If you remain on the local network, and keep the ‘server’ computer running it is very good indeed. If you want to use data outside of your own network Bonjour will not work. It is the reason I use WebDAV on my local network en use a VPN to connect to my network when working remote

Not necessarily. When I‘m out for work I access my data on iPhone and collect (some, not much) new data. Back home I sync to my iMac via Bonjour. My iMac is off when I’m out.
I‘m doing the same when I‘m on holiday. Of course it depends how much data you have, the kind of your data and how you work/modify your data.

Works for me perfect since one year (I stopped syncing to NAS and to MagentCloud).

Indeed, if you have you data synced to the device (which is not by default when you use premium features) you can access it everywhere and sync when you connect to the local network. Most of the time this is also sufficient for me, but sometimes I would like to access larger archives which I do not store on my devices.

In the end it all depends on how you use DT and DTTG.