Sync problem in DT3 where items do not download

(Note: I recently retired an old personal Macbook and switched to a newer one, and that is the one with these sync issues. I am using the M1 version of DT3, if that matters at all)

Thanks in advance,
Agam 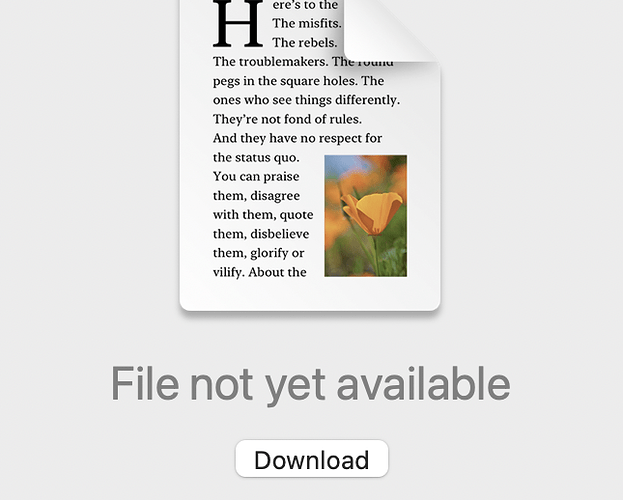 I see this when I try to access the file. I also see a little grey “cloud with dotted line” icon next to the file in the list.

Is a verification of the sync store successful too? Do you remember on which device you’ve added the file?

Hmm, what does “verification of sync store” mean here?

I did verify it locally on the device.

Yes, there is a device where the file exists.

Thanks, this is a great tip to know about, I will try it right away!

Meanwhile, I did try another thing that didn’t work: deleting the database and re-importing it.

Thank you for yet another cool tip!

And which device did you create/modify this document? Is it available on any device?

Yes, I can see it on one device, but not the other.

Modify & save the file on this device & synchronize the database. Is it available on the other Mac afterwards?

Finally got around to trying it and it worked, for just that file!

(Others exhibit the same behavior though)

Does this mean DT3 thinks it’s synced the rest but hasn’t?

Also, when I open it in DTTG I see the contents and I wasn’t seeing it before but … I see a gray square flash with “complex document, opened read-only” … does that help?

Does this mean DT3 thinks it’s synced the rest but hasn’t?

It’s hard to tell whether DEVONthink 3 didn’t receive or DEVONthink To Go didn’t send the data without having a copy of the same sync store.

I see a gray square flash with “complex document, opened read-only ” … does that help?

That’s not related, it’s a limitation of DEVONthink To Go and its current editor.

I tried it for more files, and it worked perfectly each time

Given that this works on an ad-hoc per-file basis, is there a clue to what might be wrong that would resolve it for all files in the database ?

Given that this works on an ad-hoc per-file basis, is there a clue to what might be wrong that would resolve it for all files in the database ?

It’s obviously a sync issue. But it’s still unknown when and why this happened, which versions of DEVONthink & DEVONthink To Go were used and which is to blame and whether the bug has been already fixed. The easiest fix is probably to clean the sync store and to upload & merge the database again.

You’re right, what finally fixed this, in the two databases that were giving me issues, is doing the following: