Syncing but not Syncing

A couple of months ago I posted a question under the title "Syncing is driving me nuts! " I received what I thought were good answers, but now the databases don’t seem to be actually syncing with each other. The databases seem to be running the sync mechanism at the prescribed intervals. I’ve watched the little indicators spin like they were making connections, so I think they think they are doing something, but nothing results that I can see. Is there a way I can troubleshoot this and find out if they are even talking to each other or who they are talking to if not each other?

What kind of sync location do you use?

A Local Sync Store on each side. The screenshot below is from the MacPro and I guess that would be the “Server”. The MacBook Pro’s screenshot looks the same except the Sync time is not the same which I guess indicates they are not making a connection. 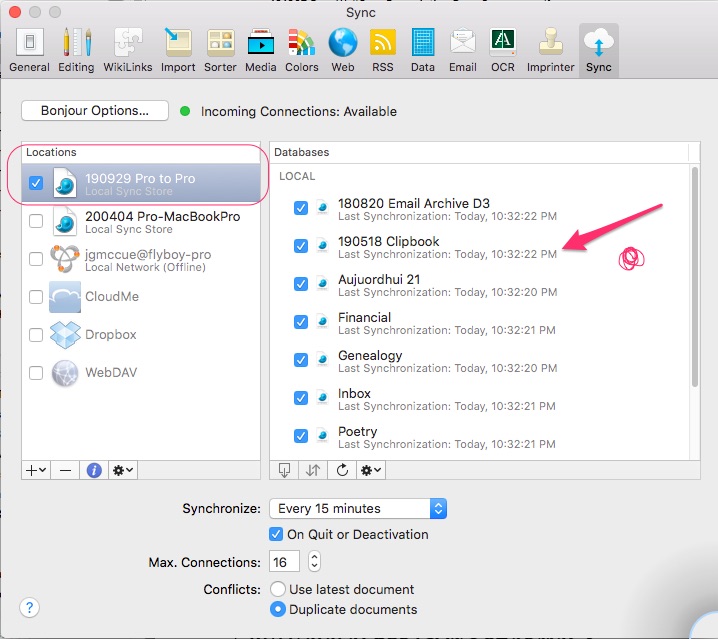 The Arrow indicates recent Sync time and the squiggly thing below it indicates that something happens there each time the machine thinks it is Syncing.

?
If both machines are using their own local sync store, there is no connection between the two.

OK. Then how do you make the connection between them?

Jumping in on the thread, I know. How many computers involved with syncing? Probably would be useful see the Sync screen shots for each device. 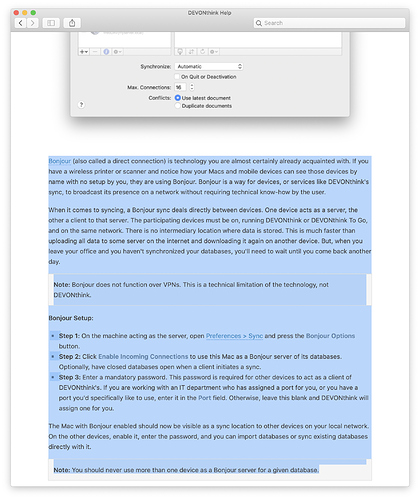 The screenshot for the other one looks exactly the same, which, evidently, is the problem.

So, is the other computer supposed to be set up using the following icon?

If so, my next question is about the password. There is a password, but I have no idea what it is. I use 1Password to keep track of my passwords, but it doesn’t seem to be anywhere in there. How do I change it without knowing what it is?