I have DT largely setup how I want on my laptop and I’m trying to sync changes back to my iPhone and iPad, but I keep getting either “Cant create folder of database “Global Inbox,” path exists already” or “Couldn’t communicate with a helper application: NSCocoaErrorDomain 4099.”

My iPhone tries and I see some changes sometimes, but my iPad just throws the former error and gives up. Two questions:

I assume the best thing to

That is what I would do. Do not attempt to sync before the sync store has been fully populated. Consider using Bonjour.

Does the app have to be open

In effect, yes. Whilst sync will continue in the background, it is unpredictable when iOS will cut the app off from the necessary resources.

Further to @Blanc’s comments/advice, i’m assuming based on the error message that you are using Apple’s CloudKit or Apple’s iCloud–reported here by some to be unreliable at times.

If you really need cloud-based internet synching, then try one of the other service providers. I find Dropbox works, and there are numerous (based on Google) WebDAV providers out there.

However, Bonjour which only works on your local network is very reliable and very fast. I have discovered over the years that I don’t need internet synching as when I’m “out and about” and making changes to DEVONthink and/or DEVONthink ToGo, when I return to Global HQ sync catches up quickly with Bonjour.

Also … only sync what you need while “on the go”. Keep the volume of data down to reasonable levels.

Ok, this is really helpful, thank you.

I didn’t mention it and should have, but yes, I’m using CloudKit.

The direction on Bonjour is great. I was going to come back today and ask that specific question. And I’ve used Dropbox since it’s early days, so no problem to switch over to that.

I will say my use case is a little different than @rmschne — I use my 10in iPad a lot, though it’s mostly for retrieving info and updating, as opposed to creating. (I’m in way too many meetings.) Doesn’t mean I can’t optimize what is synced (anything, say, not modified for 18 months is probably safe to leave out—I’m sure there’s a rule I can set up for that).

And thanks for the clarity on iOS behavior. Again, now that I know, easy enough to manage around that first sync, and any big, subsequent changes.

Alright, switch to Dropbox and try the initial sync through Bonjour. Sounds like a game plan for my car appointment today. Thanks, all.

Ah, now that I (and everyone in my houselhold) is up, I see the sync completed over night. Looks correct on both iPhone and iPad, so I believe I’m off to the races. If I experience continuing challenges, I’ll switch over to Dropbox.

Perhaps the issue was less the software and more my patience, which would not be the first time I’ve experienced that.

The first sync is almost always the longest since people are transmitting existing databases they’ve been using for some time. So yes, this requires patience. Subsequent syncs are usually fast enough they feel transparent since less data is usally involved.

I basically do same … I just don’t expect the iOS device, especially my iPhone to be a real computer with lots of spare memory and good network performance. I rely on Bonjour to be quickest, and I only put on my iPhone what I need. You need what you need. Go for it, remembering on the other side of every “benefit” is a “cost”.

Many thanks, @rmschne , as I decided to start over on the DT sync on my iPad tonight. I not only used Bonjour to re-run it, I connected with a cable and basked in the glory of how fast it was. Right now, seems to have worked well!

So making progress, but apologies as I do have one more issue that keeps popping up. Check out my error log here: 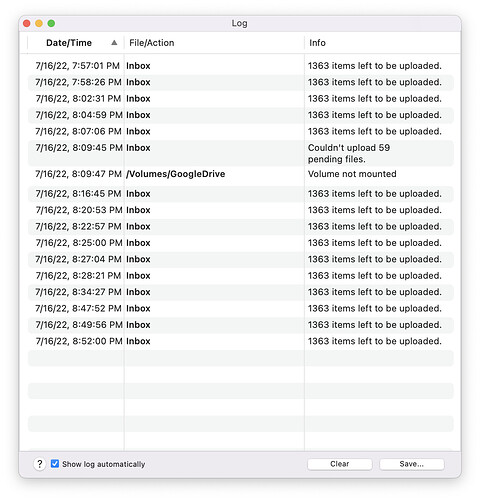 I’ve actually gotten that error all day, was just trying to give it time to clear.

Any suggestions on how I can track down those 1363 items from anyone? I’m happy to just remove them from DT and add them back in chunks, but not sure how to identify.

Thanks, as always, in advance!

I’m just guessing that the problem related to Google Drive and that perhaps some indexed files in DEVONthink pointing at Google Drive DEVONthink can’t find. Could be that the files are in Google Drive, but not available “offline”.

Note that item count != file count. Sync breaks down files into chunks; depending on the size of the indexed files stored in GD, the two error messages may be related.

Can you select anything helpful from the context menu for the log entry? Otherwise, you can set up a smart group to detect item is pending (I think that is the correct terminology…)

Spot on, and thank you both for your second set of eyes.

Once I removed the Google Drive folder from DT, stopped getting the error on my laptop.

Used the smart folder “Pending” search to find the files that throwing a similar error on my phone and deleted them, so I suspect that will clear up that issue.

At this point, everything seems to be in sync, at least from a top level. I’m now getting an issue where the DTTG app on my phone suddenly cuts for no clear reason, but I’m also running iOS 16 and I think the unexpected quits might have been related to the error. Regardless, if I need to zap the app and reload everything, it’ll take a fraction of the time of my first attempt because of the help here.

Thank you, really do appreciate the assistance!

Regardless, if I need to zap the app

Recommend you don’t “zap the app”. Rarely does any good. Re-starting the device is the best first step. Good to restart iOS devices every so often.

I also think running iOS 16, which is well beyond my “up-to-date-according-to-Apple” iOS 15.5 may be the cuprit. Best to report to Apple and not here?

Hey all, so I’m still fighting to get this working on my phone (ipad is good!). I’ll provide more details on the actual issues–if it’s not resolved–later today. I’m running out to go to a conference, but I have a quick question if someone doesn’t mind providing insight: any reason not to run Cloudkit and Dropbox sync concurrently? Will it be fine, or will I induce a singularity and ruin the universe? Either answer acceptable!

Jokes, of course. Thanks for all the help!

DT have in the past recommended against using two cloud sync locations for the same database on the same device.

Synchronizing the same database(s) to the same device(s) using multiple sync stores is indeed not recommended. However, it’s of course no problem to e.g. use a sync store for your personal devices and another one to synchronize with your colleagues.

any reason not to run Cloudkit and Dropbox sync concurrently?

I concur with @Blanc’s recollection.

i will reverse the question … why are you wanting to do this? what is the expected result?

Still on version 16 of iOS which I suspect is beta?

Got it! This is all helpful, thanks, all. This is largely what I figured.

i will reverse the question … why are you wanting to do this? what is the expected result?

Yeah, fair question. It’s more a matter of convience–with my iPad syncing via Cloudkit, I didn’t want to change that, but I thought I’d see if I could make my iPhone go with Dropbox.

That’s not my preferred approach; I prefer simple, straightforward and elegant, and two different syncing mechanisms is not that. But since I’ve been working this for awhile, I thought I’d see.

Still on version 16 of iOS which I suspect is beta?

@rmschne, Yeah, I’m on 16, though I’ll note it is in the public beta stage. Certainly doesn’t mean there aren’t bugs, but they’re almost never showstoppers like this. What’s weird is my log, which I’ve attached a screenshot of–it’s like DT on my laptop knows there are changes, but can’t get to them. 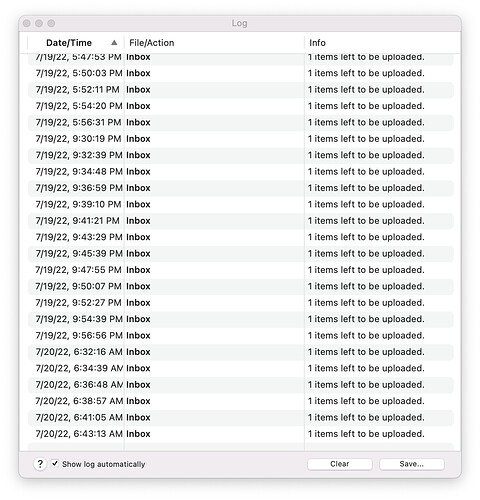 So, right now, I’m on iOS 15 device, Cloudkit is working fine. On iOS 16, Bonjour sync works (I’ve only done a sync with a hard connection, btw), but I’m seeing the exact same behavior on both Cloudkit and Dropbox sync: after the initial Bonjour sync, the device tries to run a wireless sync and seems to get stuck at the upload stage. I’ve deleted the app and reinstalled twice, going through the same process each time.

I think the next step is to take everyone back to zero, basically–pull DTTG off my devices, turn off Cloudkit on my laptop and clear the Dropbox sync store, then run a Bonjour sync again with my devices and let Dropbox take over from there.

@cgrunenberg Given that my one iOS15 device works fine and my iOS16 device has seen consistent issues across two sync approaches (and I’ve deleted the app, reinstalled and reloaded twice), is it worth me putting all this together into a cohesive and complete ticket for the DT team? I’m sure you’re testing on iOS16; my team does iOS development, so I can at least put together a nice QA ticket.

As always, I appreciate the help! Everyone’s very helpful–at some point hopefully I’ll be able to contribute more to the forums here than just questions. Thanks much!

Yeah, fair question. It’s more a matter of convience–with my iPad syncing via Cloudkit, I didn’t want to change that, but I thought I’d see if I could make my iPhone go with Dropbox.

Oh. Not doing both sync services on a device, but each device using a different sync service. However, the source (Macbook?) has to be running both services on the same database at the same time, so DEVONTechnologies’ advice still stands.

I rely on Bonjour via local network and I have time, then, to read and work with my DEVONthink documents. Debugging Synching really doesn’t scratch any itches anymore.

@cgrunenberg Given that my one iOS15 device works fine and my iOS16 device has seen consistent issues across two sync approaches (and I’ve deleted the app, reinstalled and reloaded twice), is it worth me putting all this together into a cohesive and complete ticket for the DT team? I’m sure you’re testing on iOS16; my team does iOS development, so I can at least put together a nice QA ticket.

Yes, please start a support ticket so that we can have a look at the logs (although chances are that’s an issue of the iOS 16 beta or just the poor reliability of CloudKit). Thanks!

I deleted everything and started over, using Dropbox to sync instead of Cloudkit. All seems to be running as expected.

Since it’s now working, I didn’t do that ticket as I now think it was a problem unique to something I had done in my earlier futzing around.

Regardless, I’m now good. Thanks for your help, especially @rmschne and @Blanc , who I feel like were really digging in to assist. Looking forward to returning the favor one of these days!