Hi, I often thought tagging records with custom word count “classes” (not with their actual word count) could be very handy. Never really looked into this, but now I did - and it’s not as simple as I thought.

The idea is to add a tag to all PDFs (from OCRed screenshots to whole books), but of course this doesn’t make much sense - but it does if we use “word count classes” instead of the word count.

Not sure if the “classes” I used while trying to write the script are ok, but pretty sure it would make sense to go up with increasing word counts.

What I want to do (actual Word Count on the left, “Class” on the right):

That’s all fine, but at some point I thought it were a good idea to have it all in one - and messed everything up.

Any ideas how to go on with higher Word Counts? Are there “functions” from other scripting languages that could be used in AppleScript for this kind of stuff?

Here’s what I have right now

And I’m curious what this is all useful for?

Just checked it again, in that way the script works (but also I’m not sure yet if those “classes” of 250 steps make sense, maybe 500 will do it too for word counts from 1000 to 9999). It’s everything above that point…

I’m dealing with a lot of different sources, some are simple “ticker” news, some are newspaper articles, some are very long, and there are a lot of papers too. So it would be handy to distinguish them by word count (classes). I did not use tags before, but if I could implement them automatically it would be a great help.

Background is that I initially wanted to test (and implement as a smart rule) another script that auto-tags by frequency and weight concordance today. While testing the best balance between frequency and weight (for me) it came to my mind, that it also could be useful to change the number of tags that this other concordance script should automatically attach - depending on word count…

Yes, I got a “little bit” sidetracked, but the idea of auto-tag with noun concordance and distinguish sources by word count (which often means quality over here) got me

I think this would be more easily done by creating smart groups with a Word Count criteria and or showing the Word Count column and sorting on it.
This would also alleviate having a potentially massive number of Tags.

This is my suggestion… 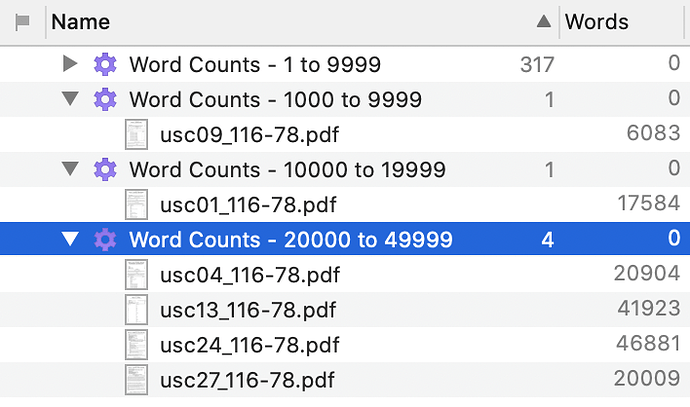 a potentially massive number of Tags

Sure, that’s why I try to find a way or handler (maybe a “function” from another script language) to “cut” the actual word counts into “classes”

I’ve never used Tags, but inspired by this forum I think they could be very useful (for me), E.g. I’ve got a topic I want to dive into:

It’s just another layer to sort things at a given moment.

It’s your call but I would opt for smart groups as I showed in my example. This is esepcially true since Tags are used in autocompletion suggestions too. If you have many WordCount tags and type w in a tag, it is going to give you those tags as suggestions too.

Thanks, didn’t consider this before (as I used no tags), the posted script is just an example of failure (while testing I used "_WC: " for “WordCount”, "_F: " for “Frequeny” and "_W: " for “Weight” in order to have them always at the beginning).

But I think here’s all mixed up (which is my fault), I wrote about a concordance script (which I wanted to test) while I’m now searching for an answer if there’s a “function” or AppleScript handler that could round word counts. I’m sure that’s possible, but after several hours…

Here is my approach you could try if you’d like…

Doesn’t make much difference for a 2,000,000 words PDF, but it does if you try to distinguish a lot of PDFs with word counts between 300 and 2000 words by their word count. I’ve collected so much stuff (and DEVONthink makes is dangerously easy to do so…), every little hint on what’s possibly important is welcome. I’ll try your script now