I’ve decided to embrace the tags approach to filing but I’m hitting a brick wall with DevonThink. I’m applying tags to files within DevonThink but HoudahSpot is showing me that DevonThink is applying them as Keywords. Obviously these don’t show in a Finder search.

Is there something I’m missing here? Keywords are an entirely separate metadata to tags (be they Apple’s own or OpenMeta tags). Is this how things are going to stay?

On imported files, Tags are not applied unless the file is exported (by whatever means, even drag and drop). On indexed files, Tags will be applied almost immediately.

Thanks for the replies. Hopefully these pics might help. 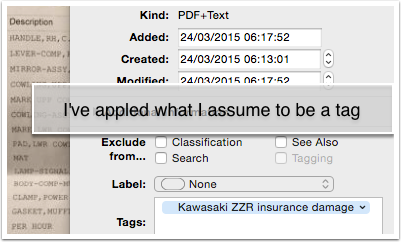 On imported files, Tags are not applied unless the file is exported (by whatever means, even drag and drop). On indexed files, Tags will be applied almost immediately.

I guess my point is that the use of the term tags is misleading now that the Finder uses tags and supports OpenMeta tags. DevonThink is actually using Keywords.

The semantics of this led me astray when trying to find files and it was HoudahSpot that informed me as to what was going on. Without it I’d be extremely confused and so I expect there are a few other DevonThink customers that might find this clarification useful. I guess I need to look at using DevonThink in a different way if I’m going to use the Indexing method.

It seems strange that DevonThink is used primarily to organise information overload as are Finder / OpenMeta tags and yet this information is essentially walled in one or the other apps. Not very helpful.

I guess my point is that the use of the term tags is misleading now that the Finder uses tags and supports OpenMeta tags. DevonThink is actually using Keywords.

I really cannot suggest much, other than to say that DEVONthink does indeed apply tags using OpenMeta and Finder (Mavericks) tags and not keywords.

One thought is that it looks like you are using an older version of HoudahSpot. Have you tried using the current version, or tried searching for the tag with Spotlight?

I downloaded the latest version of HSpot and have included the screenshot from it using the same file. No change.

It’s frustrating that you’re both getting different results to me. In fact the very result I’d like to achieve. Can I confirm with you both that you are indeed importing the files and applying tags?

I stress importing because BlueFrog wrote that tags aren’t applied to imported files. Only to indexed files which is a strategy I’ve never employed simply because it makes sense to me to keep certain project files together in a DT database.

Thanks both of you for taking the time to reply.

The bug here is that DEVONthink is writing tags into the keyword metadata of the helper file, instead of into Yosemite tags. (I’ll submit a bug report.)

Are you seeing the ‘tag’ in Keywords as @gazzasanx is showing? I’ve just tried replicating this myself, and I still don’t see tag data in the Keywords field in HoudahSpot. 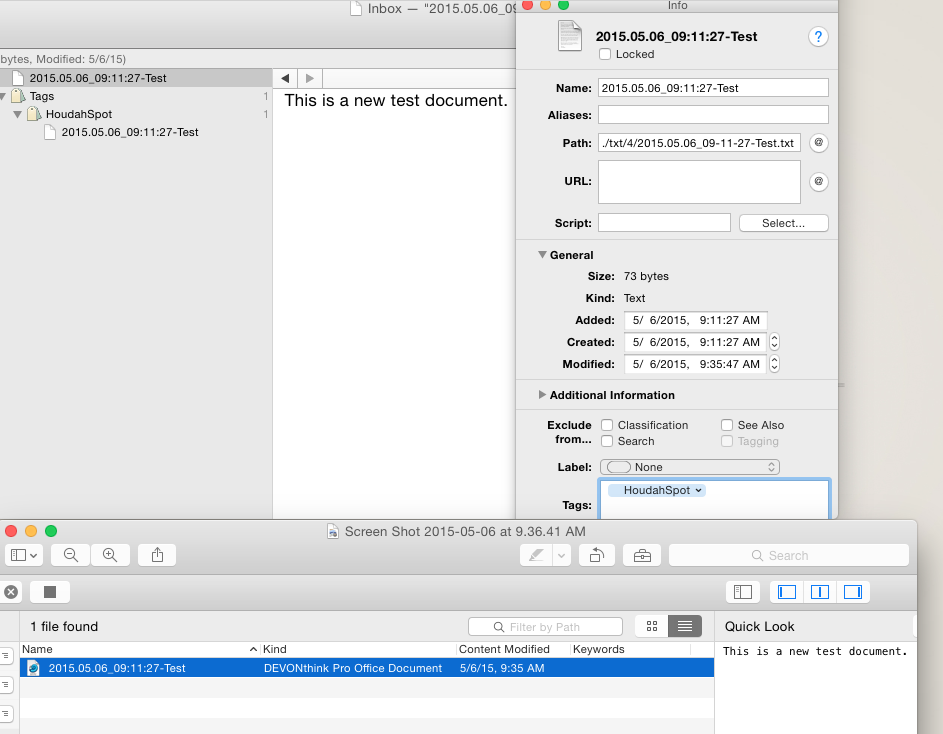 The other info on tags, is of course correct. Tags will not be available to the filesystem or third-party apps when the document is contained in the database.

Curious, as that’s exactly what is in the image I posted, other than I have DEVONthink on the top and HoudahSpot on the bottom, and my Keyword field is blank in HoudahSpot.

I’m getting horribly confused now but in an off-topic kind of way.

I’m seeing that Greg_Jones seems to be having a conversation with korm yet the two forum posts I’m seeing from korm are saying “deleted; useless”.

There’s also a quote reference - “The bug here is that DEVONthink is writing tags into the keyword metadata of the helper file, instead of into Yosemite tags. (I’ll submit a bug report.)” I’ve searched the forum for this but I’m not seeing it anywhere else. Has it been submitted outside of the forum? I would like to track this.

P.S. Greg_Jones - the screenshot you submitted doesn’t scroll so it doesn’t display the data intended. Can you resubmit?

I am sorry to confuse the situation. I thought I able to reproduce the situation you posted; others apparently are not able to do that. My responses were thus useless. I am not going to be reporting a bug that others cannot reproduce.

As far as I can tell, you have configured your database for Spotlight indexing – hence the Kind of file that HoudahSpot reports (“DEVONthink Pro Office Document”). When a database is configured for Spotlight indexing, a collection of helper files is created in ~/Library/Caches/Metadata/DEVONthink Pro 2. DEVONthink creates these files for both indexed and imported (or internally created) documents. Spotlight (and therefore HoudahSpot – a Spotlight wannabe) indexes these files because it is not permitted to look inside databases themselves.

These Spotlight index files are not the “real” file in your database – the files are pointers, only for Spotlight’s convenience. Whatever you see in HoudahSpot about their metadata is irrelevant in the sense that if you actually exported the real file from the database it would have tags as tags and keywords as keywords.

This is what you were concerned about, I think – is DEVONthink messing up my metadata. No, it is not. HoudahSpot might be messing up how it reads Spotlight indices, but DEVONthink is not messing up your metadata.

Both Greg and I have confirmed that over several decades of combined use of the product.

I had completely drafted my reply, and when I went to submit it I saw that @korm had already replied to you. I’m still going to post what I drafted below, in the hope that there may be something additional that is helpful:

P.S. Greg_Jones - the screenshot you submitted doesn’t scroll so it doesn’t display the data intended. Can you resubmit?

There really are two parts to your original question/situation, and the discussion has become somewhat confusing due to the deleted posts.

The first part is with respect to when/how tag information is written to the filesystem for documents contained (not indexed) in the database. @BLUEFROG explained how this behavior works, and the bottom line for what this means for you is that you will not be able to search on tags outside of DEVONthink, using Spotlight, HoudahSpot, or some other utility. DEVONthink can create spotlight indexes for documents in the database that will allow you to search outside of DEVONthink for other data, including name, content, other metadata, etc. You just cannot search on tags for documents contained in the database as explained above by @BLUEFROG.

The second part of your issue deals with tag names in the Keywords field. This is not the normal behavior for DEVONthink, I’ve never seen it before, and I cannot reproduce your issue here. The screenshot I posted displays the screen info that I captured, which indicates that I cannot reproduce what you are seeing on your system. Using DEVONthink, I assigned a tag of ‘HoudahSpot’ to a test document, yet the Keyword field is still blank. As I mentioned in my first post, I really cannot suggest what might have created this situation on your system, but it is not normal. Perhaps at some point you used an app or utility that converted tags to Keywords?

The suggestion that I can offer is that if you can reproduce this issue, open a support ticket.

Thanks again for the time you’ve taken to deal with this. I can’t reproduce it either so it’ll have to remain an anomaly.

I wasn’t worried that tagging data was being corrupted by DevonThink. It was more the inefficiency of having to search in two places; inside DevonThink and outside in the Finder (I find the prospect of this tedious in the extreme) plus the seemingly incongruous use of Tags and Keywords.

I’m in the process of trying to rethink how I store data and had started using DevonThink again as an alternative to the Finder. The tagging incident had thrown a spanner in the works but I’m much more informed now. Thank you for helping with that.