Tags showing up as group from DTTG?

When making tags in DTTG they do not always show up under the info. When I sync to my Mac it shows a “group” icon rather than a “tag” icon.

Can someone explain why some tags appear as groups and some as tags? 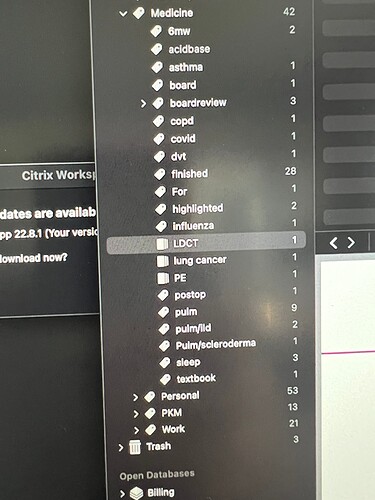 Edit:
It appears that all of the tags I add from devonthink to go are showing up as excluded from tagging. I notice this only when going to Mac, right clicking on the icon that appears as “group” under tags, and then unchecking exclude and things work as able. I do not see any changes in settings so not sure why this is happening. I only have the database groups set to exclude from tagging, not individual groups (aka default DT settings).

How are you creating the tags in DEVONthink To Go?

It appears that all of the tags I add from devonthink to go are showing up as excluded from tagging.

Is the database in DEVONthink To Go set to exclude groups from tagging?

Yes, the database is set to exlude from tagging. As per the manual this should have the groups show up more as “folders” rather than tags which is what I want. Then manual tags should show up as tags.

Also this is the same settings that have been since I have had DTTG for a few months now and the behavior is new on same settings.

Also the groups themselves inside the database are set to not exclude from tagging, again at default settings.

I am creating new groups via URL scheme. The url defines new tags for this new group. Since the most recent update, new tags created along with new groups are inheriting the new group’s parent’s tag-exclusion status. For example: x-devonthink://x-callback-url/creategroup?destination=DATABASE&title=GROUP&tags=NEWTAG The above URL creates group GROUP in DATABASE (note: this database excludes groups from tagging). It should also tag GROUP with NEWTAG. Instead, NEWTAG does not appear as a tag.…

Seems to be similar to this. In fact pre existing tags work fine it’s only adding new. This may be a bug?

We are investigating some tag-related bugs that may be in the current release.

I have confirmed the behavior here and will add it to the issue on file.
Thanks for your patience and understanding.