This automation doesn't start. Why?

I’ve set up this workflow:

Now…
…all is fine until the PDF is imported into the Inbox, then the Smart Rule doesn’t start (see the screenshot).
But I can see the file inside the Smart Rule.

What’s wrong?
I’ve tried many combos but nothing happened.

I’m sorry for so many requests in the forum, but I’m learning to level up my DT3 usage. 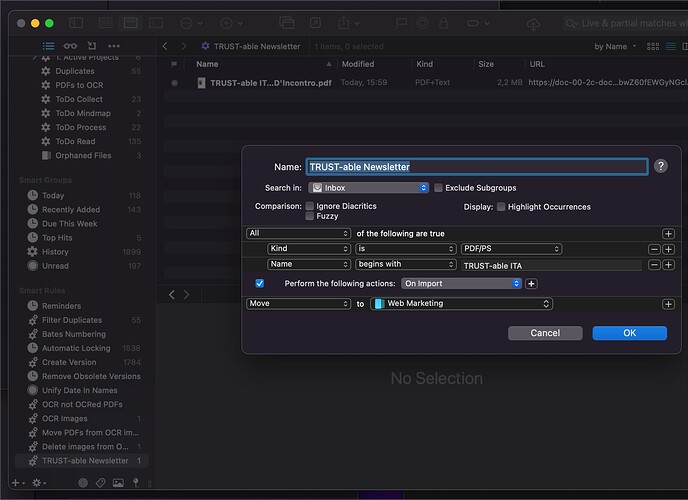 here a folder action starts the script to the point 2

Most scripts like folder actions don’t trigger smart rules (to avoid unintended side effects). One workaround might be to use a scheduled smart rule but actually since version 3 folder actions are discouraged, indexing folders & smart rules are recommended instead.

I’m sorry for so many requests in the forum, but I’m learning to level up my DT3 usage.

No worries! This is the place to be for such questions and conversation.

I wasn’t aware of such recommendations.
So which best practices do you suggest in order to automatically import a file (that matches some parameters such as name and kind) from an external folder?

Index the Finder folder into your database, then target that indexed group with your smart rule.

It makes sense, but I fear it would break the organization of my assets, at least from a cognitive point of view.

I use DT to organize my knowledge (papers, bookmarks and others related to my work), and iCloud for my documents (so that I have them ready on the Cloud).
Indexing a folder with that PDF means that I have a knowledge folder outside DT.

Or maybe it’s because I’m using DT at 10% of its strength?
Maybe I should start to consider DT not only for knowledge files, but also as the hub of something broader?

I can’t speak to your query except on a personal level as we all think about data organization very subjectively. People use and organize their data in many different ways, none of which is a mandated approach.

The best advice I can give anyone is: Use DEVONthink in a way that makes sense to you. If you’re efficient at filing, searching for, and accessing your data, you’re doing it “right”.

Also, you can add a Move into Database action to a smart rule to essentially import an indexed file. That way it wouldn’t be outside DT.