Thoughts on migrating from Ulysses

Forgive me, complete n00b here. I see how I can save files in the “inbox”, but I’m unclear on how I can save in any sort of folder structure outside that. Is it possible?

The Global Inbox is the only inbox that can be directly saved to.

‘index files and folders’ was exactly what I was looking for. It’s perfect honestly.

That’s an option to exercise for sure.

When you create a DT database, you can have as many groups (folders) in there as you want.

Also, if you add a folder to your favorites, it will appear as a drag-and-drop destination in the “sorter”.

I think I said all there is to it, but here are some screen caps demonstrating. 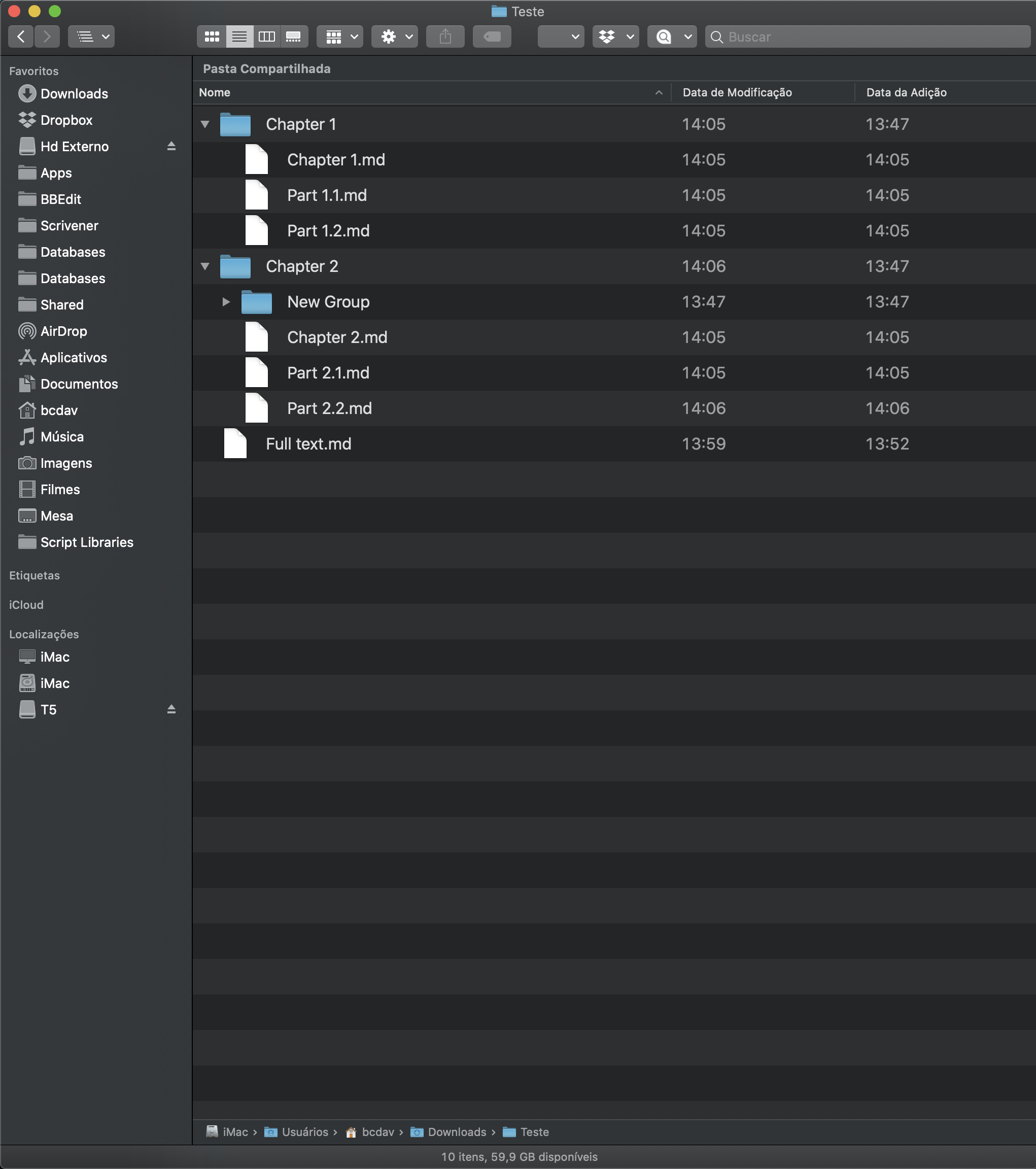 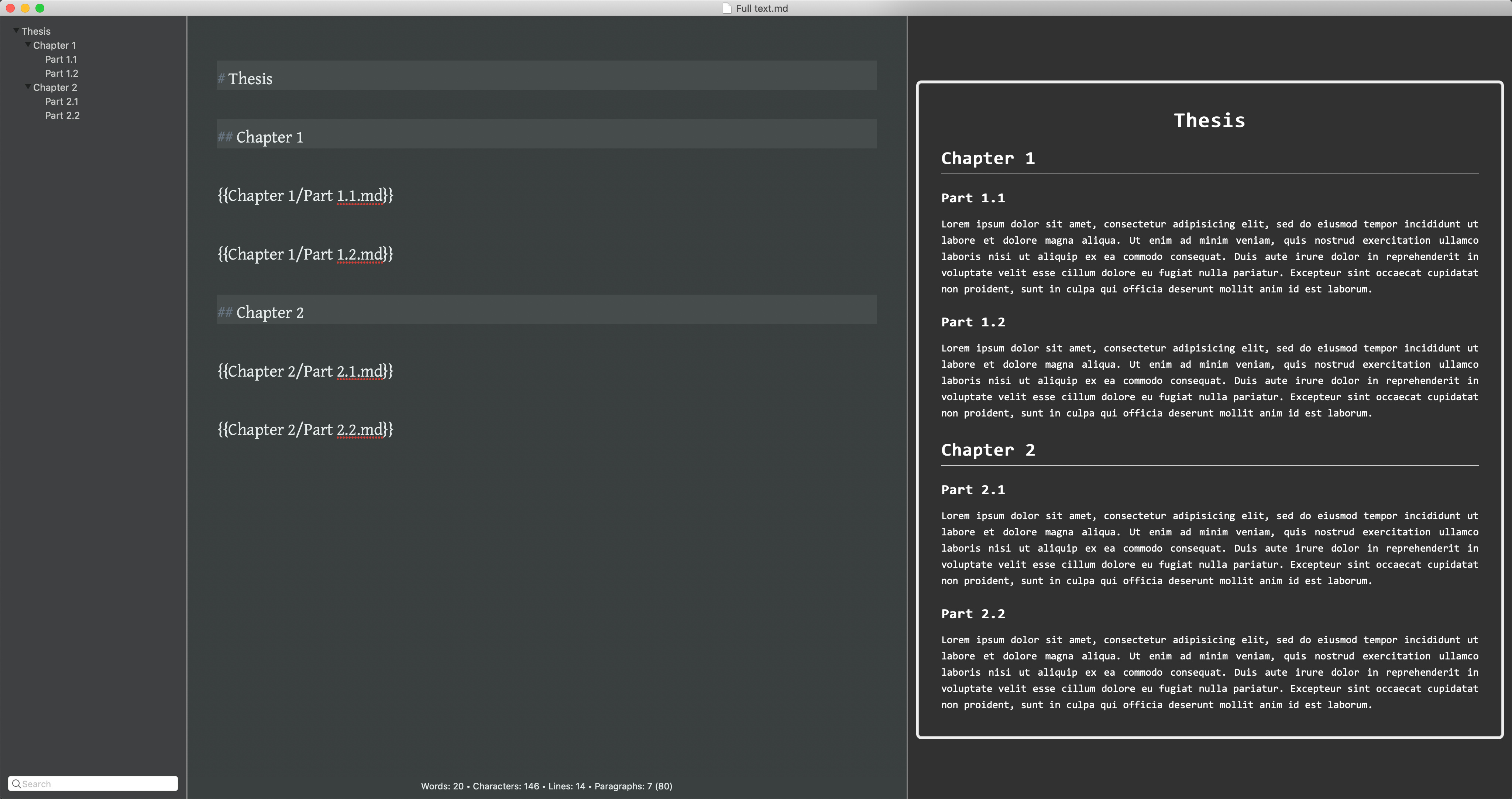 Here’s another thing to keep in mind. Devonthink can handle anything you can copy to your disk.

Scrivener files can be stored in Devonthink, and Devonthink will synchronize them to sync stores.

Literature and Latte would probably not endorse the practice. I’ve had no trouble - and I also keep backups.

I loved Ulysses but am not a fan of the subscription model, and like yourself, I found myself preferring a writing database that I could also easily include other items (you can technically include some external files in Ulysses). Also, since DEVONThink is using MultiMarkdown, I find it much more portable. Ulysses has some custom changes to Markdown.

I currently use iA Writer on my iPad, with DTTG as a location source. I use MultiMarkdown Composer + Marked as a previewer. Sometimes I will use SublimeText but Composer is made by the same person that develops MultiMarkdown.

Scrivener files can be stored in Devonthink, and Devonthink will synchronize them to sync stores.

Literature and Latte would probably not endorse the practice. I’ve had no trouble - and I also keep backups.

They have a knowledgebase article on the topic, actually:

which is probably good reading for using an external sync service with pretty much any app.

Thanks for the link - great advice.

DevonTHINK is reasonable as a long-form writing programme (as long as you don’t need to use the iOS app - though I believe they are working on fixing that). I’d say the main limitations are twofold:

If DevonTHINK introduced some of those Scrivener features, I might consider switching to it for my long-form writing. Still, if you don’t need any of those fancy features it should be fine.

With DevonThink for Mac, you can create a group for an article, short story, essay, book, etc, and include each section of the book as a separate document. You can set the sort order to “unsorted,” which is the same thing as manual sorting.

Sort of. The main difference with Scrivener/OneNote is that each note in the hierarchy effectively doubles as a folder; so you can have text in the main note, and the sub-notes. DevonTHINK folders work like folders in Finder, so you can’t write text in the folder itself (only the notes contained within). It’s a subtle difference, but a real game-changer for writing long-form texts (which is why Scrivener is so popular with novelists).

DevonTHINK introduced some of those Scrivener features

This would be very interesting, but I suggested something along this lines here before and Christian (the developer) replied that there were no plans to do it in the foreseeable future.

What I imagined was being able to move files in the hierarchy with the keyboard (that is, up and down, in and out of folders).

In Scrivener, you can highlight multiple notes and it presents the combined text in one continuous scroll, allowing you to read everything you have written without clicking between documents.

I have recently written a script that can mimic the above-mentioned feature Script: Refreshable merged view of files in mixed formats + direct[almost] editing of source files + content dynamically linked to groups/tags. That is inspired by Scrivener and from the MM6’s transclusion feature mentioned here: Thoughts on migrating from Ulysses.

But you are right that Scrivener makes writing’s workflow easier for its folder-is-note feature.

each note in the hierarchy effectively doubles as a folder; so you can have text in the main note, and the sub-notes.

I use Scrivener 100% for academic writing. The only main issue I have with Scrivener is citation management - if only they can work with other reference management apps to provide add-ins to generate different citation formats and bibliography…!

Another way to mimic Scrivener’s flow is to use one group to hold all individual pieces of writing. Then the user can either rely on naming prefix to manage the ordering of flow, or to use un-sorted settings in DT. Then using the script mentioned here to build a merged view.

I am not saying this will make DT a better writing tool, just that it can be done. Even for version and reference library management if other script is used (such as my stack script that can link each “note of writing” to a recallable group located elsewhere in DT to hold all previous versions and reference materials). The problem is that not all users are comfortable to use custom scripts and the concerns for continuity of support for custom scripts are legitimate.

Disclaimer: I am not trying to promote the scripts but to share ideas. I wrote them for my own purpose (academic oriented) and at leisure (kill time) only.

The main difference with Scrivener/OneNote is that each note in the hierarchy effectively doubles as a folder; so you can have text in the main note, and the sub-notes. DevonTHINK folders work like folders in Finder, so you can’t write text in the folder itself (only the notes contained within). It’s a subtle difference, but a real game-changer for writing long-form texts (which is why Scrivener is so popular with novelists).

You might be able to achieve the same effect by having a group with just ONE document in it containing text, and then a sub-group containing subdocuments.

However, I can see where that might be a “nope” to anybody used to doing things the Scrivener way.

It’s long been interesting to me that app developers will tout BIG features in new versions of an app, whereas to individual users, a small feature — like the Scrivener one you describe — becomes super-important.

An example that comes to mind for me (and forgive me if I’ve said this on this toipic before): I love the way Ulysses handles in-line comments. I haven’t found anything quite like it in any other Markdown app.

I do some writing in Devonthink. I’m grumpy about editors, the software kind. Emacs by choice for code, vi/vim as forced, and my creative voice is found in Nisus’ Draft View. Scrivener is a lovely tool backed by a great company worthy of support. I keep an active Scrivener license for those reasons, and I might go back to it some day.

In Devonthink, my “binder” for draft text is the Navigator. If I have a section to ditch, I’ll set a header at the bottom of the document called Ash Can, or something worse. I can drag-and-drop chapters there to park them out of the way without deleting them.

My “binder” for research is Devtonthink.

I’d like to use some kind of snapshot utility. Git is too nerdy for writing. Does anyone have a suggestion for a nice utility that stores its data in a normal filesystem file?

you could try notebooks which has a file system and supports markdown, RFT etc.

Notebooks looks nice. Can you save individual files, or does it have a common area for everything you write?

In my haste, I didn’t express myself well. Hopefully, the idea still came across. The word processor’s navigator works as Scrivener’s Draft folder, and everything else goes in DT groups.

Maybe a little late, but…

In Notebooks you only define a “Home folder” where it stores all its files. “Notebooks” (feature, not the app) are sub-folders inside this home folder and for every note (file) inside each notebook are stored additional .plist files for meta data (afaik). These .plist files normally are invisible. I tried (and rarely use) notebooks app and find it really pretty but not ideal for my workflow. But one or two bigger writing projects I did it serves me quite well. With indexing the home folder of notebooks app in DTP 3 these two work together, sort of.