When opening the “Go > To Group…” dialog box via Keyboard Maestro and pasting in a group name, the Enter key press sent by KM isn’t registered in DT (although it does if I press Enter myself). Is this a KM issue or a DT issue?

I’m asking here because the “To Group…” seems non-standard and doesn’t have a button. It’s the only hiccup I have in an otherwise very useful macro…

(EDIT: the macro is much longer, this is only the section that concerns DT and which doesn’t behave) 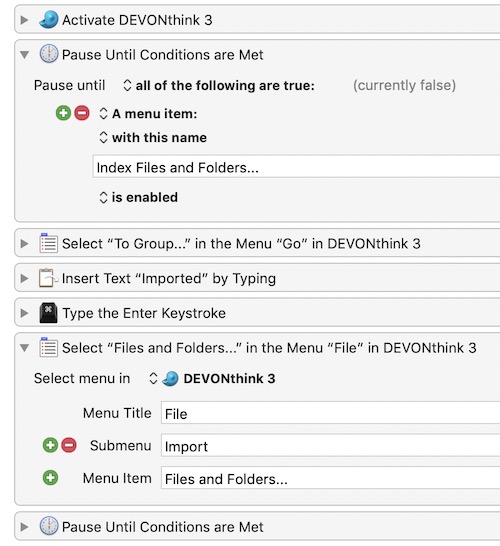 So you’re indexing files into a folder named Imported?

No, I am importing files into that folder. Please look closely at the full menu command at the bottom: File > Import > Files and Folders…

I am only using the “Index etc” menu item at the top, after activating DT, to make sure that DT has indeed been activated and is ready for user input (a menu item has to become available and “Index etc” isn’t likely to be found in other applications I’m using).

EDIT: it might be a KM problem, I have no idea. I’m only asking here because the DT menu for that function is non-standard, as far as I can tell. I thought it would be easier for you to check, because the guys at KM might not have DT, whereas this concerns basic GUI conventions and system events, of which you know much more than I do.

I would suggest doing this with AppleScript instead. Replicating mechanical actions with automation are always fiddly and prone to being fragile.

Thank you. I am aware of that. If I could do this with Apple Script I wouldn’t be using KM.

Hello - I just did a quick test to see if I can replicate your issue. I think the problem is that you are Typing the Enter Keystroke instead of typing the Return keystroke. In my quick test, I found that there is a problem also when selecting a group name that exists in multiple locations (for example, if two databases are open and they both have a folder named Import). Other than that, this works for me with the latest versions of Keyboard Maestro (9.0.1) and DevonThink (3.0 beta7)

Thank you. I believe @rkaplan has narrowed it down to a bug in DT3 which @cgrunenberg says will be fixed in the next release. FWIW, I believe I had tried both Return & Enter, with no success, although I’m still on KM 8.