I really love these tools, and use them frequently when processing my inbox. However, I would love to see the option to enable the search to include the parent folder/group names as well as the actual group or folder I’m searching for.

For example, if I’ve got a group I want to jump to named, “Health”, but that group is housed in folders, “Receipts” > “2018”, it’d be cool to be able to search for something like “hea rec 18” and have just that folder pop up as a result.

Sorry if this isn’t making sense, but overall, I’d just like the parent groups/folders’ names to be considered when searching inside the To Group… and Move To… features.

That would syntactically be more difficult since it’s not following a known pattern.
You could have entered 18 hea rec and expected that to match too. Also, that could easily match a group named `“18 hearing aid recommendations”, not just the group you’re thinking of

Personally speaking, I’d like the popovers to only match items in the current database unless it was preceded by a control character, like a + .

But I digress, and these are matters for @cgrunenberg (and others) to weigh in on

Ah yes, that does make sense. Thanks for the reply! Looking forward to hearing others’ thoughts as well.

Oh, and just another example as well: I’d love if these features in DT3 could function the same way OmniFocus 3’s “Quick Open…” feature works. I attached a screenshot of a search string that’s similar to what I was attempting to explain when I first posted this question. 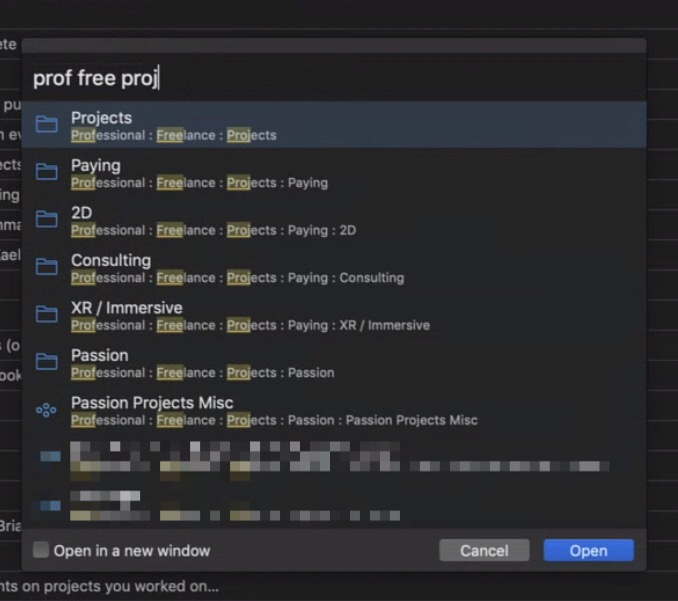 @BLUEFROG Is there a specific way to submit this as a feature request? Or do I just go ahead and leave it here? Thanks!

The Forums are a good place for feature requests.
If they’re posted on the forums, other people can weigh in with their opinions about it.