Please help. I have a smart rule which triggers OCR on PDFs if they contain no text layer. In my list of global smart rules this one is right up at the top, and runs reliably. I have a second smart rule which should trigger following the first one, if certain words are contained in the document. I have tried “on import”, “on creation”, “after saving”, “on OCR”, “on renaming” but the second rule never triggers. If I select the second rule, then it will show the documents on which it should act according to the conditions.

I’ve also tried adjusting the first smart rule to use different methods, but all to no avail, the second rule never triggers automatically (but will run correctly if manually triggered). 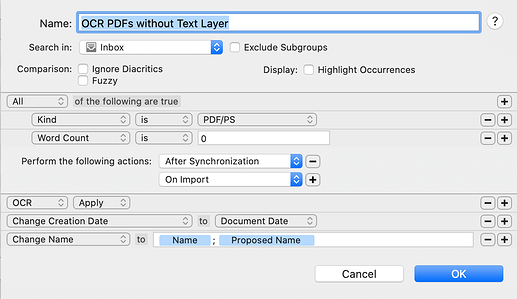 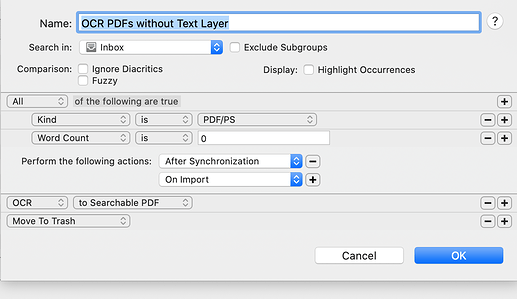 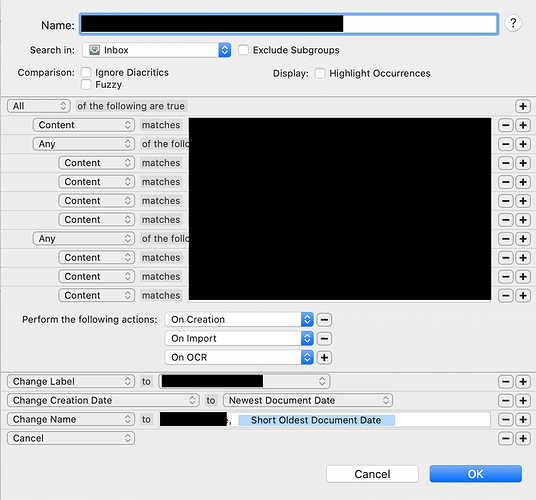 Although as I say, I have tried various triggers (see first post in this thread), and the conditions are fulfilled, i.e. as soon as I mark the rule in the sidebar, the document on which I wanted it to act automatically is listed - but I have to then trigger the rule manually.

Smart rules don’t trigger any other smart rules. Therefore if the PDF document is not searchable on import, the first smart rule will process it but the second rule not.

Thanks for responding. I think that would be a feature request then; I had assumed that the fact that there is a “cancel” action, that smart rules would always run in sequence. The action I would envisage would be “continue with - smart rule xyz” (assuming that there is a reason for smart rules not universally triggering further rules (I can imagine runaways…))

I think that would be a feature request then; I had assumed that the fact that there is a “cancel” action, that smart rules would always run in sequence.

All matching smart rules are indeed processed sequentially (that’s why the order in the sidebar matters) and therefore the Cancel action can prevent further smart rules to change anything.