My devices are set up the way you describe it. I checked the log and it said: connection to server timed out.
Why does this happen and how can I reconnect?

Also, what do the little triangle and the little ball on the sync icon mean?

My devices are set up the way you describe it. I checked the log and it said: connection to server timed out.
Why does this happen and how can I reconnect?

Have you relaunched DEVONthink on the Mac?

Also, what do the little triangle and the little ball on the sync icon mean?

The triangle means an error has been logged.
The dot means there an unSynced changes in the (or a) database.

No. Should I do that every time the connection to the server times out?

Right now, no matter what I do, the client (iMac) will not connect to the server at all. One moment, after relaunching the program I can see some activity, but before any syncing starts there is already a message in the log window saying: connection to the server timed out.
The sync icon is mostly greyed out so I cannot activate it. There is the little circle showing that there is some unsynced data.
Would you say synchronisation with a sync store (external or local) is more reliable than Bonjour synchronisation?

Right now, no matter what I do, the client (iMac) will not connect to the server at all. One moment, after relaunching the program I can see some activity, but before any syncing starts there is already a message in the log window saying: connection to the server timed out.
The sync icon is mostly greyed out so I cannot activate it. There is the little circle showing that there is some unsynced data.

Could you please choose Help > Report Bug while pressing the Alt modifier key on both the client and the server and send the emails to cgrunenberg - at - devon-technologies.com? Maybe the logs contain some useful hints. Thanks!

Especially in case of many devices/computers sync stores are more suitable as they support concurrent operations.

In addition, this tip might be useful: Setting up Direct Sync check connection to router

ok, just now I managed to sync a newly created database to the client after a lot of trying this and that. The last thing I did was turning off and relaunching the Wifi on the client’s side and that seemed to do the trick. Do you have any idea what the could be problem?
I am using Dropbox and a number of other cloud services (don’t worry, not for syncing DevonThink databases), I had been using Evernote for years before I switched to DevonThink and everything was (and is) always syncing just fine without any extra activity on my side.

I also have unreliable automatic bonjour sync. I will be working on DT on mac for an hour, with Automatic sync on (some databases syncing to Dropbox, some to a Webdav cloud server, and Allowing incoming Bonjour), then open DTTG 5 minutes before I need it (to allow syncing). And 9 times out of 10 it still isn’t synced after that pause.

Returning to the desktop, sometimes I see it hasn’t synced to the clouds, or logged any errors.

I get the Cloud+triangle on DTTG constantly, the Mac database is “busy”, and I have to push that cloud button sometimes 5 or more times before it will sync.

To be clear, I’m not asking for “instant sync”, nor transferring large amounts of data. But it’s acting more like manual sync than automatic.

More info.
I quit and restart DT and make sure it is synced. Still seeing the spinning icons on some of the databases in the settings, but no data transferring on side panel, no errors in logs.

And how many devices are you syncing via Bonjour?

Total of 3 devices in the system. One Mac, One iPad, one iPhone. The mobile devices are set with “Bonjour Off” and pointed at the Local Network Mac. I’m almost always at home and so generally just asking for the iPad and Mac to stay synced.

I’ve been messing with the settings for another hour now, and things do work a lot smoother when I disable the webdav sync. It had given me problems in the past that were resolved by removing port numbers in the URL. The log has been quiet lately but I do get occasional NSURL timeouts

Bear in mind, a Bonjour connection only supports one active connection at a time. If one device is actively syncing via Bonjour, the other(s) have to queue up and there will be a “Database busy” message issued.

Thanks, I’ve been playing with it again today, eliminating things, and I’m getting NSURLErrorDomain -1001 every 5 minutes. I have read through the forum posts on this error.

I disabled all Sync including bonjour, and set up a new Dropbox sync for testing. It was working well at the beginning, seemed to clear everything up, but then the uploading of new files stalled. This happens a lot on the mac, only with devonthink. I look at my network traffic and see that the uploading has stopped, nothing else is saturating the network. I can still upload files to dropbox through the browser, for example, only DT is hanging. This was with a test of ~100 markdown files and a few screen shots. Nothing more than 1mb.

What I haven’t seen mention of: the NSURL errors only happen when DT on the mac is not the front window. Is that normal? I keep testing it to make sure. I add a doc to a synced database and click over to safari or anywhere else. I watch the network traffic, nothing going on. 5 mins later get the NSURL error. Click back to DT. 5 mins later I see it synced. Very reproducable.

Dropbox is reporting no sync issues. I have no other files in dropbox, plenty of free space. I’ve reduced my number of connections to 3, 2 and 1.

The iphone and ipad now always show the Cloud + circle icon (although they did download and upload the synced files). I have tapped that icon dozens of times, and the circle remains. In the settings of the mobile devices, they report being synced in the last minute, and they seem to be. Just that circle…

Just enabled bonjour again. With DT in the not-front window it doesn’t sync there either.

But the bigger problem is not resolved. I understand what I keep reading: that NSURL error is a problem on dropbox’s end. But that doesn’t explain the problem that DT only syncs to dropbox when it’s window is brought to the front. I’m not referring to DTTG here.

Continuing to reproduce the problem. Specifically:

Dropbox sync fails (with NSURL -1001) only when DT is not the front window.
It’s not just a benign error message, files are not synced to or from other devices via dropbox.

Bonjour sync DOES work when DT is in the background.
Automatic Dropbox sync works only when DT is the front window. (Triggers every 6 minutes)

Will you please confirm, is DT supposed to sync with Dropbox when in the background?

Yes, DEVONthink syncs when it’s not in the foreground.

DEVONthink is not constantly syncing. It syncs on an interval and has for years.
I am also not seeing any -1001 errors when DEVONthink is not the frontmost app (and re-retesting this again)_.

Thanks for the quick response. I understand the not-constant nature. For me, it will NEVER sync to dropbox if its not the front window. 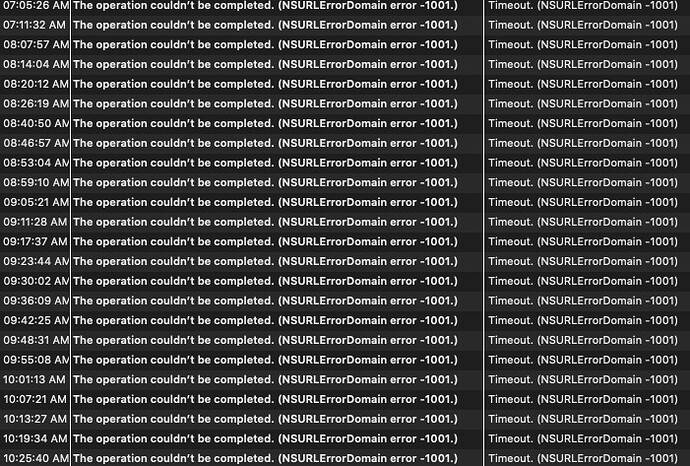 I just changed it to “manual sync every minute”, and now it neither syncs NOR throws the NSURL error.

Edit spoke too soon. there’s another NSURL error, just not every minute.

And does this persist after rebooting the machine?