Using '/' in Tags via Bookmarklet - how?

I’m having trouble with adding TAGS from a Bookmarklet… Tags are supposed to be comma delimited strings, but if I have a tag like “AAA/BBB/CCC.001” the tag should read that, AAA/BBB/CCC.001 - but instead Devonthink splits it into three separate tags - AAA, BBB, and CCC.001 - so it’s delimiting the tag by the forward slash…
If I use BACKSLASHES, the tag is stored as a single tag, like "AAA\BBB\CCC.001, almost correctly, but I need the tag with forward slashes, /, and not .

How can I get it to keep the tag as a single tag and not split it by the forward slashes?

I want to include a claim reference for the items, and the reference includes forward slashes.

You CAN include forward slashes when you enter a tag directly in DT3’s interface, but using the sorter or url commands it doesn’t seem to be…

You CAN include forward slashes when you enter a tag directly in DT3’s interface, but using the sorter or url commands it doesn’t seem to be…

Where? When creating a tag in the Tags group of a database?

Hi Jim…
My apologies… all this time I didn’t realise that once you left the record, Devonthink splits it… a little confusing, as it doesn’t split it immediately, as you can see here: 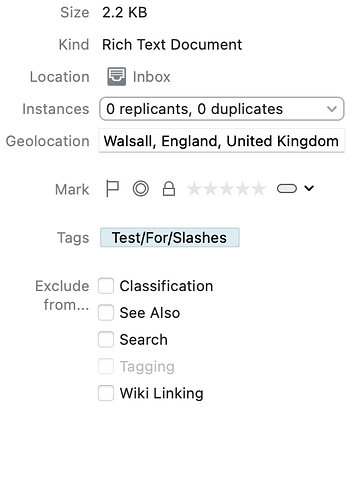 Ahh… indeed that is the case. Development would have to assess if the tags could immediately show as individual tags.

Do note this behavior has been in place for some time, since around 3.5, IIRC.

Also, the forward slash is the control character delimiting locations in a database. For example, /Inbox/US/IRS is the path to the IRS group in a US group in the Inbox of a database.