Is there a way to view search results “as icons”? Viewing large thumbnails is often a very effective way to refine very quickly a search to the precise document I’m looking for. But there doesn’t seem to be any easy way to do that in DTP.

I read in a previous post about this tip: Go to the search window, do the search, click “+”, go back to the main window, click the newly created smart group, delete the smart group when done. That’s quite inconvenient in my situation.

Use case: I use DTP with ScanSnap to manage all the personal and professional documents that come to my desk (a couple thousand a month), and several times a day I need to retrieve a previously scanned document. With Scan Snap Organizer on Windows, I could type a few keywords and then quickly scan the result list viewed as large thumbnails; the visual cues from the thumbnails were a great aid in distinguishing documents (checks, bank statements, parking tickets, school flyers).

But after migrating to Mac and finding DTP (so much more robust and useful than Spotlight/Finder), I really miss using the visual cues of thumbnails for my quickie searches (and most of my searches are, or should be, quickie). Here’s an example of what my document thumbnails look like: 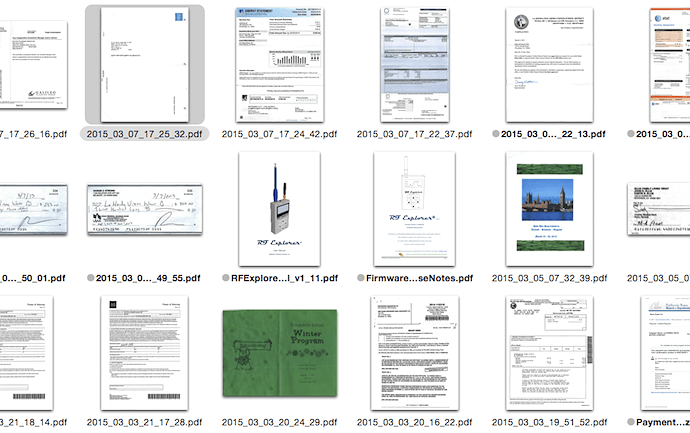 Windows File Explorer and Mac Finder make the different views pretty much orthogonal to how you generate the list of files/folders being viewed. It would be great if DTP also did that.

Is there a way to view search results “as icons”? Viewing large thumbnails is often a very effective way to refine very quickly a search to the precise document I’m looking for. But there doesn’t seem to be any easy way to do that in DTP.

That’s not yet possible but probably a good idea for future releases.

But there doesn’t seem to be any easy way to do that in DTP.

That’s not yet possible but probably a good idea for future releases.
[/quote]
If it helps I also would like to see this.

Wow, just bought and started using paid version of DEVONthink (after having played around with it a couple of years ago and not buying it then). I have to say I was pretty surprised to find this doesn’t exist. The ability to view a whole bunch of files as icons seems like a major part of DT’s utility and was a big reason to buy DEVONthink in the first place.

So second this as a feature request.

You can select multiple results and use View > Cover Flow.

I tried View > Cover Flow, and it doesn’t really help that much. It shows just three results at a time, whereas viewing as large thumbnails / icons would show up to a couple dozen at a time. But thanks for the suggestion…

Agree. It works, but it’s not as helpful as a screen full of thumbnails… Can’t imagine why this is a hard feature to add…?

Can’t imagine why this is a hard feature to add…?

Development isn’t a trivial matter. Just because something appears to be simple, it doesn’t mean the underlying programming is an easy matter. Also, consider, those thumbnails have to come from somewhere. They have to be generated, checked for needed updates, etc.

Not having this feature is probably a deal breaker for me. I have been trying to use DevonThink as an Evernote replacement for the last weeks. The capabilities of Devonthink are actually better than Evernote. However the user interface is one of the hardest to use UI’s I have seen in my life.

Predicting what an action will do on a document, and how this differs depending on whether it is indexed or not adds a huge amount of complexity.

And I am using a ScanSnap in exactly the same way as the poster in this thread. From the name of the file, it’s impossible to tell its contents. But from a thumbnail it’s very easy. I may be missing something but I don’t understand how you would use DevonThink with a large number (1000’s) of scanned documents for search.

What’s the issue with using a Smart Group (though I don’t necessarily advocate deleting the Smart Group afterwards)? One can be constructed and double-clicked to edit criteria, like the name.