WebDAV SyncStore after deleting all instances of DevonThink

I recently had a situation where I had deleted every single version of DevonThink on each of my computer, iPad and iPhone.

I sync them with WebDAV and when I tried to reinstall and connect back to WebDAV it seemed to have only synced the indexing but none of the actual data.
What I had not strictly understood and maybe I should have, was that the syncing does not actually back up to the WebDAV server but merely keeps the various platforms in sync.

Is there any way for me to backup to a cloud platform rather than just sync?

Another quick question I was wondering if anyone has any ideas on, is it possible for me to have both Bonjour and WebDAV sync on and is this recommended so that when I’m at home sync is fast and when I’m out sync is slower but both work? (can’t find any literature about it)

glad to be back on DT and really happy about DTTG3!

As mentioned many times: Sync is ​not ​a backup, neither advertised nor advocated as such. We strongly advocate proper primary backups using TimeMachine (or similar snapshot-style backup applications) and external drives. Also, you should read the series of articles we posted: DEVONtechnologies | Search & Find

And yes, you can sync a database via both Bonjour and a remote sync option.

…and cloud backups too.

I use Bonjour and a remote WebDAV sync store as you describe without any problems. Have been operating that way for about six months with about 1.5GB of databases on the remote side.

I use TimeMachine on the Mac and Chronsync as well for backups. The option to backup to iCloud is selected on the iOS devices.

Ok interesting, thank you. I remember reading something a while back that said it wasn’t good practice to have multiple sync methods on at once but I guess DT is smart enough to use Bonjour when on the same Wi-Fi and WebDAV when I’m not. Do I just enable it and that’s it or are there any extra steps?

I am also currently using TimeMachine and Backblaze but from what I understand, if I switch to using Arq premium instead of Backblaze then everything will be in the cloud as well?

Best you read the chapter in the DEVONthink Manual about Sync. If still unclear, ask away.

Also relook at your Backblaze subscription. I’d be surprised if you are not backing up to their servers on the Internet, which some call a “cloud”.

Ah, I thought Backblaze was continuous backup as it seems to always be marketed as such:

All covered in the excellent manuals. However one thing can confuse. Switch on Bonjour on the Mac (as the server as it were) but no need to do so on the iOS devices.

When on your LAN both bonjour and WebDAV sync will work in parallel. When your away sync will happen to WebDAV. Anyway, you will always be up to date.

I read the manual but it seems that the manual offers slightly conflicting information, it seems that it’s not suggested when in fact many people tell me if I enable both it makes it faster when I’m at home: 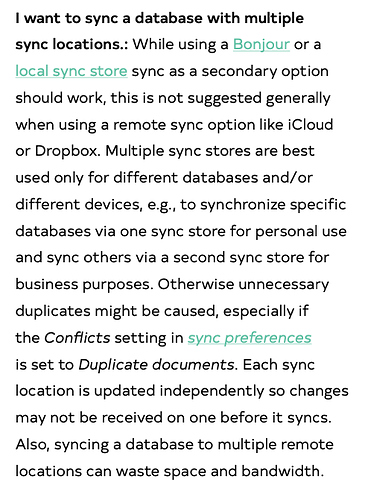 and should I turn these for the Bonjour sync on if I already have WebDAV on:

When your away sync will happen to WebDAV

This statement is not necessarily true in all cases. If you’re running your own WebDAV server on a NAS in your local network, you have to make sure that it is accessible from the outside (i.e. forward the port from your router to your NAS or use a VPN to connect to it). Of course, if the WebDAV service is offered by a service provider, its always accessible, from the LAN as well as the WAN.

True. I was referring to a ‘remote’ WebDAV server in this case (though I could have been clearer). Specifically, I use NextCloud on a virtual private server. Good that you’ve pointed out the additional requirements for a local server.

Ah yes, I use a remote WebDAV server too from Hetzner

So in the setup that I showed with the toggles on iOS above, if I turn them all on everything will work perfectly even if I have WebDAV on as well?

Yes you can enable a Bonjour sync as well as a WebDAV sync.