What happens to an inbox of a deleted database?

If you didn’t select the contents of the database’s Inbox and transfer them, then yes, they’d be gone after deleting the database. However, if the system Trash isn’t emptied, you could resurrect the database and get them.
Also, if you have current backups (and you should), you could restore the database, take the items you need, and delete it again.

I see Devonthink keeps internal backups, for instance when you use Verify & Repair Database.

You can hold the option key down and use File->Restore backup from versions DT has stored.

A follow-up question - if I use Verify & Repair as part of my weekly backup strategy (as in backups via creating archives), do I need to worry about Devonthink’s internal backups eating evermore disk space?

The internal backups are not file backups. They are only metadata backups used for rolling back to a previous metadata state in a troubleshooting situation. (Also there are only two weekly rotating backups.)

From the Help > Documentation > Getting Started > A Word About Backups… 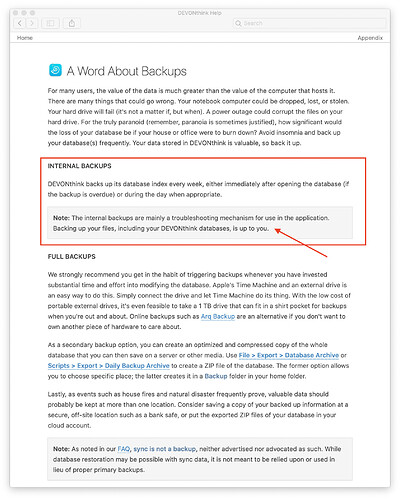 Verify & Repair is maintenance, not backup and we suggest using it at least weekly or bi-weekly if DEVONthink is in heavy use.

Thanks, Bluefrog. I was hoping there might be something there for the original poster.

I use Verify and Repair as part of my weekly backup routine. My backups are done with the create archive feature. I keep about two months of weekly archives, rotate three time machine volumes, and still feel uneasy about trusting hardware. I’m a sad, nervous, creature.

An ounce of prevention is worth a pound of cure.

thanks, then I’ll see in my backups