I want to have my documents available on my computers and by internet access.

Here my idea of a setup:

Her my idea of setting up:

Does this makes sense ?
Or do you have a better solution ?

Synchronizing the Mac mini server to Dropbox isn’t necessary as long as the only computers you’re using are the Mac mini and the iMac as they’re synchronized via a local sync store.

You say that sync between theses two macs are fine with the local sync store, right?

The sync is currently not recommended as a backup solution.

You say that sync between theses two macs are fine with the local sync store, right?

That’s right. Another possibility is to sync them via a direct LAN/WLAN connection.

While I applaud the intention to have offsite backup, I don’t consider Sync via Dropbox a satisfactory backup system. The data may be modified each time Sync is performed, and there is no access to a past state of a modified document.

In my case, as I choose to live in a log cabin in scenic woods, my options for Internet access are limited. My primary ISP is a satellite service that provides relatively slow service, with a 15 GB/month cap on data usage. I supplement this with 15 GB/month hotspot access from my iPhone. It would take months to recover backups of my databases. Note that my former residence now has Gb/second broadband, with no data limits, so online backup becomes practical there.

Remember, though, that cloud backups are inherently slower and less reliable than backups made locally using good storage media.

My backup system employs Time Machine backups to an external drive. To provide for offsite backups as protection against Bad Things such as a fire or burglary, I switch external drives every few days, keeping one of the pair in my bank safety deposit box. In the worst case I could quickly restore my working files onto a new computer with loss of no more than a few days’ work. If I’m working on an important project I also update its files on Dropbox or iCloud, so as to further minimize potential for loss of important work. (Don’t store a DEVONthink database file on Dropbox or iCloud, but I can and do sometimes store a Database Archive file of a DEVONthink database on Dropbox for additional insurance.)

If your data is important to you, a systematic implementation of backups as above provides very good insurance against data loss, and requires little time and effort to implement. Depending on Sync stores for backup simply isn’t good enough.

I’ve got two databases that contain information potentially related to national security issues, because of seminars I’ve taught to government personnel. I maintain tight control of those databases and will never back them up in the cloud.

Thx to all. It works.
I did it it with a local sync.

One more question regarding this issue:
I can setup a direct sync connection from server to iMac, it is found automatically.
But this is not what I want - I want the server to be the master.

If I try to setup a direct sync from the iMac it doesn’t work - the server is not found. Even with manual IP it is also not responding. 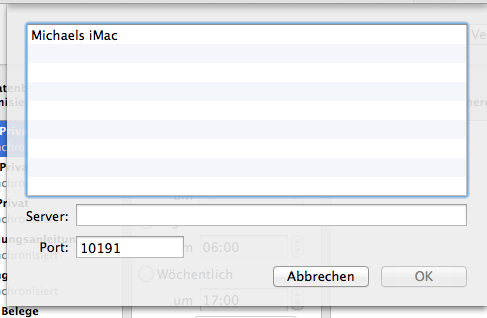