What is DT3 doing?

I was just in DT3 and ran a search for a particular keyword, and got 2 hits (which is what I was expecting). I opened one of the documents (a PDF manual for a product that I own) that’s about 100 pages. I scrolled around in it, and it was very slow to respond. I did a find within the document, and it took a LOT longer than normal to show the hits. Arrowing from hit to hit wash not instantaneous, but took about a second or two. Ultimately I found what I was looking for, and closed the document, and it was at that point that I noticed that DT3 was using a lot of my CPU though no other documents were open, no searches being run, and I just had my normal 2 databases open. I quit DT3, and relaunched it and now it’s using less than 1% of my CPU with the same databases open. 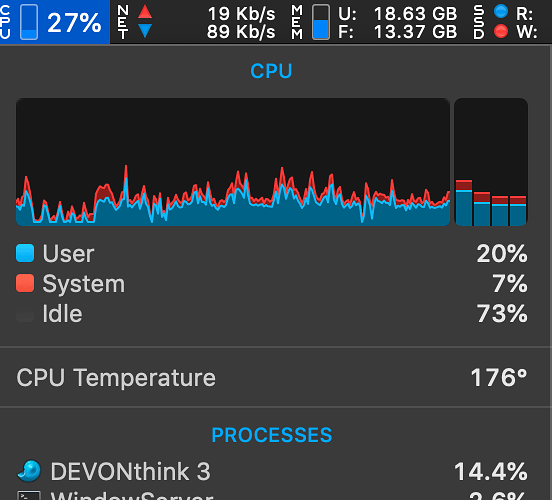 It’s impossible to assess this without knowing details about the machine and your databases.

Also, is the behavior consistently reproducible, e.g., after a relaunch of DEVONthink or a reboot of the machine?

Yeah, that’s to be expected. I’ve never seen that happen before, not even over the course of beta use. Thus far, it’s not reproducible. Running the previous search again, provides the expected results but DT3 is performing normally as expected. No lag. Only different is bouncing the app.

As our beloved, late Bill used to say, “Perhaps it’s just the gremlins.”

@BLUEFROG, a great movie, that is …