Why does the font change after I paste an image in an RTF file?

I just tried setting the preference in TextEdit for the default font, but it didn’t seem to influence what happens after pasting an image even in TextEdit itself, which is bonkers if you ask me.

Yep. No surprise there.

You can’t Paste and Match Style either since there’s image data on the clipboard.
Here you can clearly see the font change after I paste…

But again, I added a Favorite style… and this can be used to get back to a selected font. 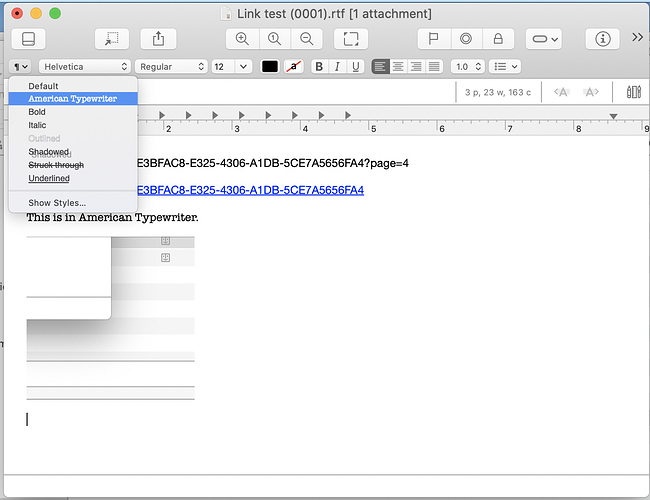 I’m a long-time user of word. I thought all that was normal behaviour

Haha! It’s funny how we get used to broken behaviors and forget they’re broken.

I have only managed to deal with this by pasting image in between 2 seperate bits of text so the font persists. V annoying! Is the font it defaults to after pasting some system default? Could this be changed?

After I posted my question here last year, I asked about this issue on the Apple Stack Exchange site because it’s a general Apple issue and not something due to DEVONthink: https://apple.stackexchange.com/questions/381090/why-does-the-font-change-after-i-paste-an-image-in-textedit

The short answer is that the behavior appears to be due to a bug in the implementation of one of Apple’s software subsystems. Changing defaults doesn’t seem to make a difference; it always reverts specifically to the Helvetica 12 pt font no matter what you do. The only solution is to do some kind of workaround, such as typing a space first, then backspacing, then pasting the image. (This could be automated using Keyboard Maestro or some other way.)

I’ve stopped using RTF files because of issues like this, so I’m afraid I don’t have any other suggestions about what to do.

Many thanks for your speedy response. Had almost reached critical threshold to move to MD and this will do it I think, even if it is a bit more fiddly with images! Its also much quicker when using scripts etc than RTF.

After I posted my question here last year, I asked about this issue on the Apple Stack Exchange site because it’s a general Apple issue and not something due to DEVONthink:

The next release will work around this issue of macOS.

The next release will work around this issue of macOS.

Which version of DEVONthink & macOS do you use? And did you paste into rich text documents or formatted notes?

Which version of DEVONthink & macOS do you use? And did you paste into rich text documents or formatted notes?

I’m not technical enough to know difference between rich text or formatted notes - it’s a RTFD file in DEVONthink. Typically I copy and paste image from screenshots or from Preview and font changed when RETURN is entered after pasting image

it’s a RTFD file in DEVONthink

That is rich text. A formatted note is HTML.

That is rich text. A formatted note is HTML

Thanks for the education.

Thanks. Look forward to it.

Christian: advice on overcoming this? Copy and paste images directly cause RTFD file to dramatically increase in size - have to do extra steps by copying image - paste in Preview - save image - paste to DEVONthink via insert picture to avoid bloating RTFD

From where do you typically get these images? From a web page in a browser (Safari)? If yes, then perhaps right-mouse on the image, copy image, then in DEVONthink RTFD file put cursor where you want, then pick Menu: Edit → Paste with Source Link. Delete the source link if you don’t want. From my limited testing it does not change font in target file.

I was going to say Menu: Edit → Paste and Match Style … which is the normal way to retain formatting, it pastes only the URL … which makes sense since that Edit command really is for text.

Copy & paste and the rich text engine use TIFF internally, the same should happen e.g. in TextEdit. Dropping files is more efficient and retains the original format.

From where do you typically get these images?

Images are from screenshots while reading PDF/web/PPT/etc so typically links won’t work. I do use links when referring to entire documents or certain paragraphs.

Dropping files is more efficient and retains the original format

Pity DEVONthink uses TextEdit which is one of the worst text editor out there. No choice but to go about using extra steps via saving images and dropping image files instead of simple copy/screenshot & paste.

It’s not DEVONthink that picked TextEdit to use on your RTF. It is what your macOS is set to use when opening those files, including Finder. You, not DEVONthink control that.

You can easily use an other editor that you like better by using the DEVONthink’s “open with” command which you will see if you right mouse click on the file. Or change the macOS setting for what app to open with RTF files. See Apple’s documentation at Choose an app to open a file on Mac – Apple Support (UK)

Use your preferred editor that operates as you prefer. Surely you have some experience with something else that you like better than TextEdit (the “free” app that arrives with macOS).

DEVONthink that picked TextEdit to use on your RTF

I am referring to inbuilt edition of DEVONthink which is TextEdit type. Yes am aware of ability to open externally with other apps but I’m referring to built in editor