“Your system has run out of application memory”

Hello. I got a 16” M1 MBP (16 GB) a few months ago and thrice since then I’ve had the “Your system has run out of application memory” pop up.

Well, it just happened again a few minutes ago and I noticed that all the apps in the list of options for me to force quit were below 500MB … except DevonThink Pro, which was at 6GB.

I don’t know if DTP was to blame for the warning—and various glitching behavior going on in Chrome. Could it have been a memory leak in another app? Or data flow from two Zoom meetings?

I’m wondering if DTP might have been the cause of the problem and message, since its memory usage was so much larger than the rest.

Has anyone else seen this warning on an M1?

I’ve never seen such a warning on an M1 Mac with 16GB RAM.

I am having the same issue Same computer as above with one brand new database open and importing a 30GB Unix MBOX file. Tried on another Intel based Macbook Pro same issue.

Screenshot below is from the intel mac

A 30GB MBOX file is enormous.
Was this created from one mailbbox?

Yes, it is absolutely monstrous. And, yes it was one user’s Gmail account over 8 years with the company. Additionally, it was all in one folder. I need to memorialize history as there may be some potential legal issues.

I get anxious if mine gets in the 2-3 gig range. If I cannot load, I understand but Devonthink has become my tool for memorializing staff mailboxes when they exit.

below are the shots from the M1 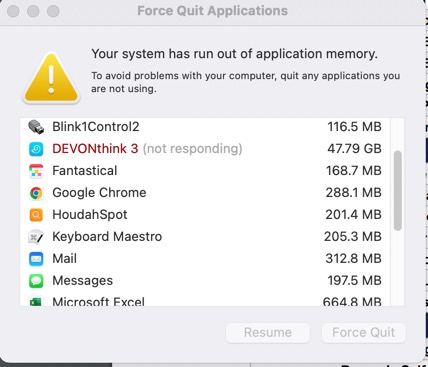 I’m honestly not sure you are going to be able to import an mbox file that big. What are the machine specs you are workign with?

Depending on your level of comfort with the command line you might be able to convert the mbox to a maildir or even individual mail files.

Ibuys,
Thanks for your thoughts. it is an M1 with 16 Gig. I only have the empty database open. I normally have all apps shut down but ran the last import with some stuff running to grab a few screenshots. Thanks for the suggestions above. I have been successful on 10+ gig Mbox files. who would ever think there would be a 30 gb user? And, he was an IT guy. it took two days to get the file from google.

I used to have similar problems with scientists who would create multiple massive mailboxes with old versions of Outlook back in the early 2000’s. They’d save absolutely everything, multiple gigs, in these mailboxes and wonder why Outlook would just stop working.

As suggested I would make sure DEVONthink is the only app running. In fact, I would reboot the Mac, then launch DEVONthink only.

I would also let it work as long as it needed to, just making sure the machine doesn’t power down or sleep.

Will give it a go. thanks

After running all night, I now have the 30Gb mailbox loaded in Devonthink. Thanks for the help. I am reaching out to our IT team to have them cap these mailboxes at 5Gb forcing folks to archive.

Excellent and a great suggestion for your IT folks.

I now have the 30Gb mailbox loaded in Devonthink.

I’m continually impressed with the industrial strength capabilities of DEVONthink.

Recently we were involved in a legal dispute where we ended up sitting across the table from opposing counsel. Since we had all of the data from our Box drive and all relevant emails loaded, we could shut the misinformation down immediately. It was amazing to be able to pull up the relevant information and all of the $10,000,000 + of associated invoices, 40K of emails, etc… to make our point. An amazing tool.

That’s awesome! Thanks for sharing