1Password 8 will be subscription only: even more uses for DT

I highly recommend PasswordWallet. I’ve been using it for probably close to 20 years. It’s not the prettiest, or fanciest, but it’s no nonsense, secure, and has apps for iOS, macOS, Windows, and Android.

Used to be on SplashID a long time ago, might revisit that

I think you may be special @Bluefrog, or at least have extraordinary ability. Possibly at one end of a bell curve, in your password memorising capabilities.

For most users a password manager should be used, if only to stop them reusing passwords. I am hopeful of Monteray’s features though.

1Password concerns me because of its trajectory. It’s been valued at over 1 billion, and has brought capitalists onboard….It has to grow to justify the funding rounds…It cant just be content with being a good password manager…

I have encountered the Electron framework yielding poor performance in Evernote and in Microsoft office, but I know very little about how it works.

Is the concern about 1Password moving to electron more to do with anticipated performance hits? Or about security? (Or both?)

Thanks for any thoughts on this.

EDIT: For myself, I have felt forced to stop worrying about the subscription aspect and about using 1Password cloud sync. After much hand wringing and after reading their security white paper, I moved from 1Password stand-alone and went in on the 1Password Family subscription (and their cloud sync) a few months ago so as to be able to share Vaults with my spouse.

Hmm… just came across this: https://strongboxsafe.com/

Anyone with experience using it?

I was a paying 1Password user. I just switched to BitWarden because I wanted an emergency access system to let my wife access my passwords if I die, and 1Password have steadfastly failed to implement anything convenient. BitWarden looks a bit rougher in places, but it has been working just fine. (Paid family plan.)

I agree with all you say. BitWarden is a little rough round the edges but there is an enthusiastic support and development community and there are regular app updates. It’s difficult to find any other decent, reasonably priced password manager for those who need to share some (but not all) passwords and secure notes with others.

I noted the Emergency Access feature—which appears to be carefully considered and well implemented. It’s certainly something I shall use.

Been using 1Password as a subscriber for a long time, and for me, it was a good move as I can share vaults with my wife.

But for those who are looking for other solutions: KeePassXC seems to be a good alternative.

It’s open source and has 10k+ stars on github: 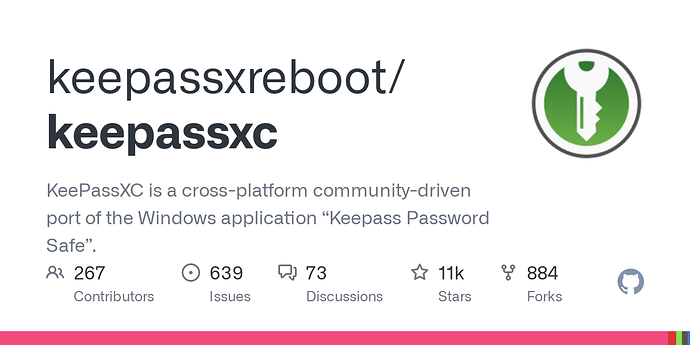 GitHub - keepassxreboot/keepassxc: KeePassXC is a cross-platform...

And how do you generate and remember unique, long passwords for all of your sites, as one is supposed to do?

What is happening to 1PW is disappointing. I don’t oppose the idea of a subscription model per se, but I’m afraid that I plan to vote with my feet against their move to make the macOS desktop client an Electron app. Equally disappointing is that their early messaging about 1PW was evasive, e.g. Q: “Is it an Electron app now?” - A: “Hey look at our really performant shiny back-end that’s written in Rust!”

All of that said, I don’t see DT as a password manager, but I’d be curious if anyone finds it useful for that. Instead, I’ll wait and see what the OS provides in the next release.

I have several of my own methods I use

All of that said, I don’t see DT as a password manager, but I’d be curious if anyone finds it useful for that. Instead, I’ll wait and see what the OS provides in the next release.

I agree with you that one of DT’s many functions is not that of a password manager (for example, because of the fact it would not provide the autofill abilities in other browsers). However, DT certainly has a role to play for things like secure notes and attachments (to use shorthand commonly used in password managers).

It’s really a matter of “horses for courses” but, speaking personally, changing my password manager has provoked some consideration of its relationship with DT (so, for example, I’m now more inclined to store certain items in DT rather than in my password manager).

I also agree that it’s going to be interesting to see what Monterey offers by way of password management—although for me it would be critical that things like autofill work not only in Safari but also in Firefox.

I switched to Strongbox because I was not keen on the 1Password subscription model. I always prefer to pay the upgrade for each iteration, and do that with all my software. That’s just my personal preference.

I went through all the alternatives and ended up being happy to pay for Strongbox on all my devices. Not cheap, but in my opinion worthwhile.

It’s not as nice as 1Pass, but works solidly. Data import was not easy. You may want to re-enter everything by hand - but at least Strongbox uses an industry standard KeePass file format which means you can move your data more easily in future.

Thanks for the info! Have you found the sharing features satisfactory, if you use them?

I was an early adopter of 1Password many years ago. I dumped it the first time they tried to make it subscription only.

I have a requirement that my password manager support both iOS and Android and it’s important to me that whatever I use be open source at least for inspection so users can know their data are not being compromised.

I’ve been an enthusiastic BitWarden user ever since and have not looked back.

I don’t mind subscriptions that amount to the price of the app (or less) every year: I get small shops needing dependable revenue and not feeling like they have to do a # release every (or other) year in order to keep money coming over the threshold.

I do mind Electron apps. It feels like Java runtime apps all over again: non-standard GUI and keystroke combinations. No thank you, no thank you.

To be honest, I have had the occasional question about switching from 1P, if only because I have found it getting a bit wonky of late, often requiring a restart of my Mac when an update gets applied.

To be clear, I don’t imagine any alternative will suddenly sweep all these issues away, but I kinda feel like the price I pay for the 1P subscription puts it in an that “premium” category which means my experience as a user should be friction-less.

I do mind Electron apps. It feels like Java runtime apps all over again: non-standard GUI and keystroke combinations. No thank you, no thank you.

While I understand the feeling, maybe you could give it a try first? I could imagine that the 1Password people took care to adjust the keystrokes (at least those), and from what I could see so far, it didn’t deviate very much from standard macOS apps. Which are not a very homogenous band anymore, anyhow. I mean, even Apple is not consistent in its UI (pull down to reload on iOS? Not in Safari).

the price I pay for the 1P subscription puts it in an that “premium” category which means my experience as a user should be friction-less.

I assume you’re not using Adobes subscription stuff nor Boxcryptor nor Netflix. All of them are at least as expensive as 1P and a lot less well polished, in my opinion. Or, asking the other way round: Are your experiences as a user ever friction-less with any software, free, or subscription, or paid for once?

The whole Strongbox system works well for me. I share the databases with my wife, and we both have them on our Macs, iPhones and iPads.

While the 1Pass UI is nicer and easier, and I used it for so many years, I’m now so used to Strongbox that I don’t miss it. SB has Face ID unlock, or Apple Watch unlock, and also the browser prompts, so all good. You can attach documents as well.

The support response is first class. I had a few difficulties early on and got immediate and quality support, so very pleased with that.

Using this app (keypassxc) on Mac, PC and iOS, sharing the database in a Cryptomator vault on all devices. Sure, it may not be as smooth usable as 1pw to „non nerds“ (no offense to anyone !) but it does the job well enough. At least for my taste.

Sigh. I was pretty qualified in my objections, so I don’t know how I feel about responding to slightly snarky commentary, but here goes: