I’ve been using both Pinboard and DEVONthink in a kind of mixed way to manage my bookmarks and references. It’s a bit confusing to have them in two places. One thing with Pinboard and its browser clippers that I really like is that I can select a part of of the text, which then becomes the description of the bookmark. The description part is also included in later searches. If I’ve not somehow totally wrong, I think when I was early testing DEVONthink 3 Safari clipper, it added the selected part to “Finder comments”, at which point I thought wow this is cool, maybe I can replace Pinboard with DEVONthink 3 at some point. But now it doesn’t seem to clip the selection anymore. Was it ever there, or has this feature been removed, or is there something that prevents it from working now?

Oh, and by the way, I’d also like it if DEVONthink To Go would also allow me to save a bookmark with the selected text as comments after I’ve selected a part of the webpage. Now it only allows to save Markdown, etc, after selecting text in Safari and then Share, but not a bookmark.

Wait, it wasn’t working, but now it seems to work again. Except it gets some strange rich text formatting with a white background on it in the Sorter/preview. I tried it with many different types of sites, and they all get the white background rich text thing. After clipped, it appears as normal text in Finder comments section of DEVONthink 3. 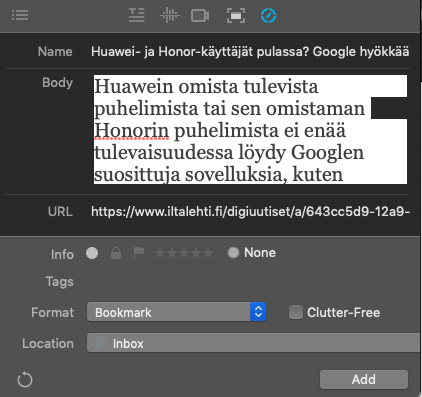 OK. It seems to work in strange way right now. When I create bookmarks in Safari in this way, it creates the Body in this way when I use this one Safari window. It works if I create new tabs in it. However, if I create a new window (cmd+N), then it not always longer works at all in that new window. Or it works at times, at other times it doesn’t.

It does do this. 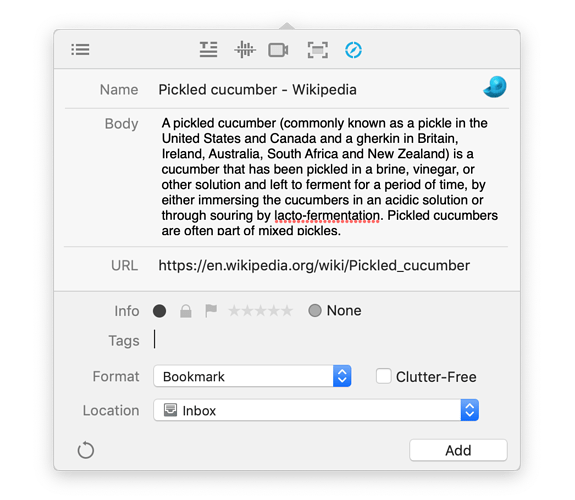 And the Finder Comments… 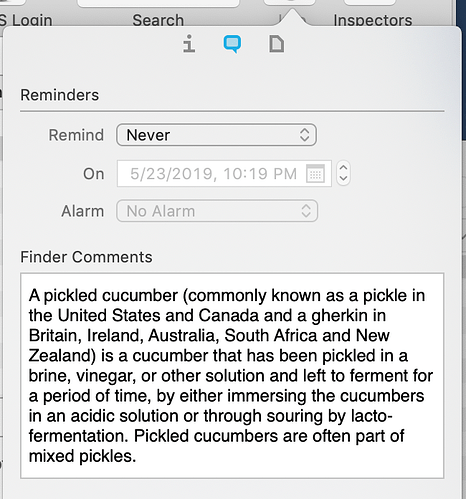 Are you taking notes in the Sorter before you’ve done some clipping?

No, I haven’t really used Sorter in other ways. I’ll keep an eye if there’s some pattern to it.

That white background in Body may be somehow because I have an automation that switches apps between light and dark MacOS themes for night and day.

That white background in Body may be somehow because I have an automation that switches apps between light and dark MacOS themes for night and day.

That may play a factor, for sure. I personally only use the dark mode color scheme on a test account for a little bit of support. I don’t use it for 95% of my work.

OK, I now have kind of a hypothesis for this issue. The clipping of selected text to Body does not work from Safari Reading List, but it works otherwise. Does it make sense technically?

Yes, as Safari’s Reading List is a different mechanism than viewing a standard web page.

I’d also like it if DEVONthink To Go would also allow me to save a bookmark with the selected text as comments after I’ve selected a part of the webpage.

And I think that in DTTG the count of words that need to be selected in order to be able to add the selected text (and not a bookmark) is too high. Quite often DTTG forces me to select more text than I actually want to clip which I then have to delete either during the clipping process or afterwards in the record. That‘s no fun

I think when I was early testing DEVONthink 3 Safari clipper, it added the selected part to “Finder comments”

If you use Keyboard Maestro you could use a macro that clicks the “Clip to DEVONthink” Safari extension and sets the selected text as finder comment. 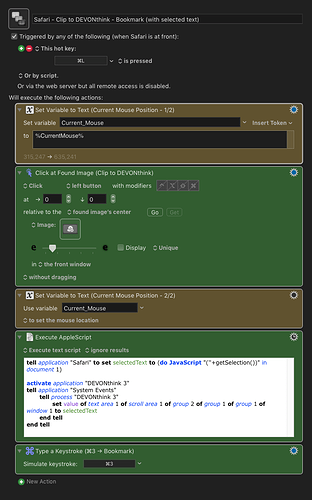 Safari nowadays doesn’t report the selection in the same way. We may look into this more deeply in the future to see if we can do anything about it.