Adding databases from DT3 to DTTG

Yes, Some Databases were available on my iPad. Now, I do not know how to add a new Database access to the iPad. I have access to one large database currently. To save space both on my Mac and on the iPad, I want a database that is only to keep open for receiving daily files. Once a week, I will sort those files into the big database that takes up room on my very limited RAM (iMac of late 2012 using Catalina 10.15).

My networking center is the household modem WiFi.

We’re getting there. Please post the following two images:

My apologies. Obviously, I should have uploaded the screenshots that you sent me. Here they are plus a shot from my iMac DT3. Thank you for keeping up with me. 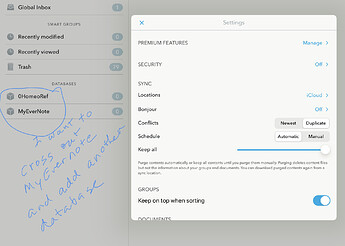 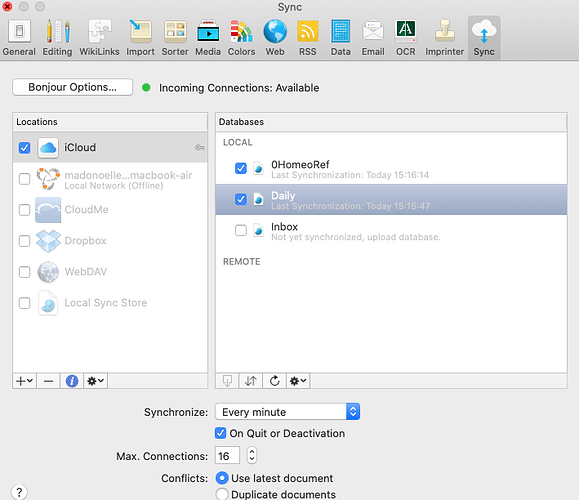 I think I am almost there. I made a file in the database named “daily” and it appeared among the database that you see in the last screenshot here. It does not appear in the iPad DTTG, however. So there must be something that I missed.

@Ellenm From the last screen shot it shows you have two database on the Mac:

Daily is a “database”, not a “file”. Nomenclature is important here.

Things are not showing up on the iPad as you have not yet established connectivity from the iPad to the Mac. Bonjour on Mac is shown to be turned on in last screen shot (good).

In the second screen shot, you show an iCloud sync location. What hapens when you press the “Edit” link upper right corner of screen? What does that new screen look like?

Assuming both iPad and Mac on the same local network, working, etc. then ipad should detect the Mac via that local network and make a Bonjour connection.

@BLUEFROG Jim, viewing the images posted by @Ellenm, I’m at a loss to explain why the iPad is not displaying a local network connection in the locations. The only idea I have left is that a firewall could be blocking Bonjour? Perhaps you could take a look at this thread, and especially the various images posted by @Ellenm? Thanks

What hapens when you press the “Edit” link upper right corner of screen?

@Ellenm posted an image of the Edit screen - no local connection to be seen there either.

b yep. firewall. different network. broken switch or router. would have been useful see the screenshot under the edit button. also IP addresses is mac and ipad. does not feel like anything DEVONthink controls. 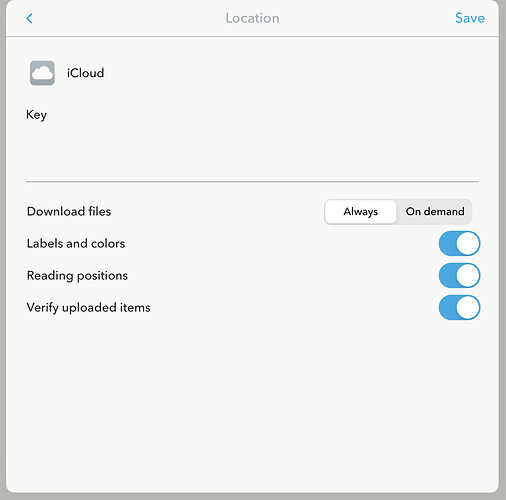 I am in Japan using a household modem for WiFi.

I changed download files to always and the global inbox showed up. So, the iPad is connecting to my iMac. It is just not loading the iMac database “daily” which is my objective.

I also saw tags being loaded. Maybe I can tag my notes so that they can be loaded and sorted later. I am just looking for a low RAM (on my iMac) and low space (on my iPad way to use DTTG.

@rmschme, is this the "switcher under the edit button that you wanted to see?
" 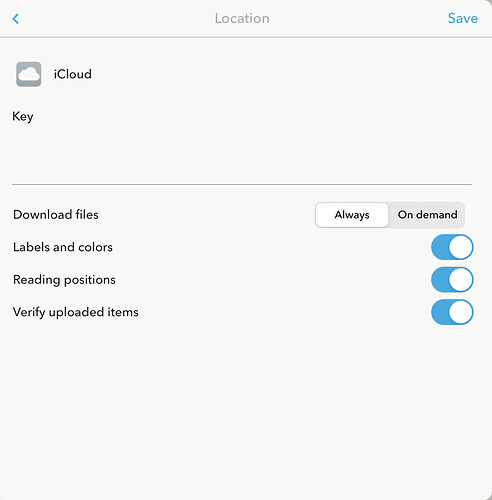 No. I’m looking for you to find and use the “add a new location” screen. Discussed in the Manual and in Help. See attached for my iPhone (I deleted the connection to my local network to show you how it looks before connection). But may be moot now as from above you have made the “connection” that previously you reported you did not have.

Re using a “house hold modem” for Wifi … modems do not do Wifi. And where you are in the world is probably irrelevant as (I’m guessing here) most ISP’s use the same basic technology of the Internet. The incoming box is a modem, router, and a WiFi broadcast device. Nomenclature is important to get an understanding. You seem to have both devices on the same WiFi network with local network IP addresses (probably issued by the DHCP server on your modem/router/Wifi box).

The second screen shot shows for the Bonjour local network connection the the six databases offered by the iMac’s instance of DEVONthink. I only sync WIP and the “Inbox” which is the Global inbox. While I have other databases, only these five databases are “open” on the desktop. The others are too big to usefully sync and I only put stuff that I’m working on on the mobile devices.

Important. To setup the sync on DEVONthink ToGO, the Mac’s instance of DEVONthink has to have open all the databases you wish to synch. Ensure “daily” is open when setting up the sync. If not “open” on the Mac, then DEVONthink ToGo will not see it.

On subsequent syncs, if on the Mac you have checked the “open databases automatically” in the Bonjour options, even if not open on the iMac, when the ipad syncs it will – wait for it – “automatically” open any databases which are closed but need to be open to sync! 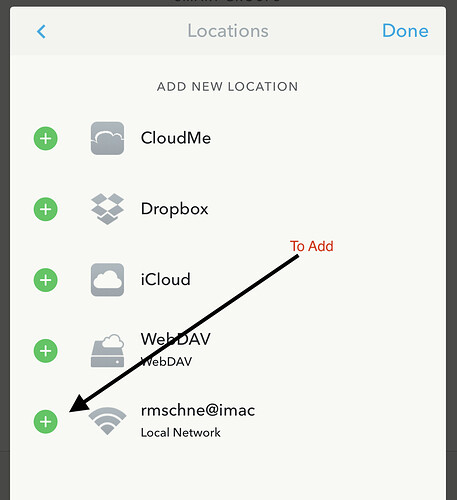 What is reported when you press the sync icon?