Adding databases from DT3 to DTTG

I finally realized that instead of using ipad single purpose apps, I should be using a DT3 database of daily activities. I open DT3 in my 2012 imac and it takes forever to open. Not a DT3 problem. I need to be opening to a much smaller file in DT3. So, I have created a daily use DT3 database.

Now I am trying to add that smaller database from DT3 into DTTG. I cannot find out how to do that.

I have already set up DT3 for syncing. I was planning to use the huge file that I use for research. But, I don’t have it set up well enough to use it without the powerful search function on DT3. I think I need to keep my research database on my ipad for an emergency, but in general, use my daily DT3 file because it is small and designed to be open all the time so it does not hog so much ram on my 2012 imac.

I see from another post that I should close DT3 on my imac when I use the ipad DTTG.

I think I want to sync everything. Not just meta data. I would do that periodically as needed. At that time, stuff that belongs in other databases can be re-sorted. Sorry to say, I am not sure of the difference.

So, my problem is to open the daily database in DTTG and also to sync it correctly.

Help would be very much appreciated.

Your instincts are good. I do same. I have a very small database called “WIP” for “Works in Progress” where I put “Works in Progress” … notes, ideas, journal, … stuff I’m working on and not just reading and referring to. That sync-s very fast (using Bonjour).

I have Bonjour set up for syncing. I also have connected 2 databases from DT3. The problem is I created the Daily database (you WIP equivalent) and I don’t know know how to get DTTG to recognize that database.

If you know where I could find out or how, I would appreciate your advice.

I found the answer to my question here: Direct sync between Devonthink Pro and Devonthink To Go on iphone

Thank you,
I am glad to know that I am thinking about the doing the obvious.

Yes, that’s why I pointed you to the “Manual” which is the same as “Help”. “Manual” is more readable and easier to learn from–at least I think so. @bluefrog did a great job with both. See https://www.devontechnologies.com/support/download/extras

I found the manual. Thank you. I am so far behind.

Also take a peek at “take control of DEVONthink 3”, a free of charge ebook at same link compliments of DEVON Technology.

Thank you very much for the links to the manuals. I did look at Joe K’s manual.
What I need to understand is how sync preferences work in the Imac. I think I am close, but just naming a local place as iPad is not good enough. The mechanism makes no sense to me. Anyway, from my photo, maybe you can help me. I think I am one step away from finding an answer. 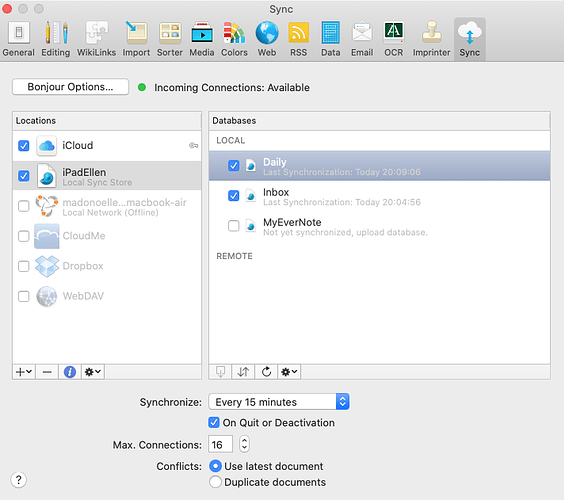 Bonjour options are set up. I have nothing that refers to my iPad so how could I be making a connection? Daily is the file that I am trying to get connected to my ipad.

Looks ok. There is nothing needed on iMac to allow the iPad to connect. That’s why it’s not mentioned in the Manual.

Doesn’t look ok to me

I will post images from my iPad in a moment

I think it’s “OK” on the iMac? No? What did I miss? Local sync store can be named whatever, so @Ellem named it “iPadEllen”.

Yes, @Ellem needs to setup on iPad. That’s why I said “On the iPad…”. Not correct?

And nudging @Ellem to read the Manual or Help is not the best thing to do instead of us repeating what’s there? No?

I may be wrong, but think that @Ellenm has set up the sync store for the purpose of syncing to the iPad - which is not required or used for Bonjour. I may of course be totally mistaken; I admit that mine is but an assumption.

You have completely correctly point to the help, and I agree that it is not helpful for one of us to simply regurgitate the help here in the forum. Based on my first assumption though, I assumed/guessed that things might have already gone too far in the wrong direction, and thought a few images might be helpful.

So I wasn’t intending to criticise your response, and my own response is based purely on my interpretation of what has been written. And I’m going to post the images anyway, because I’ve already made them 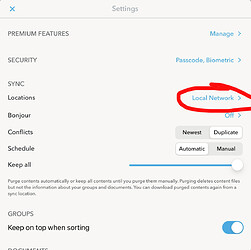 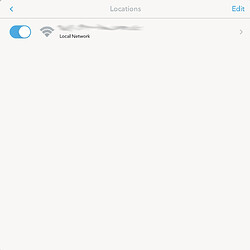 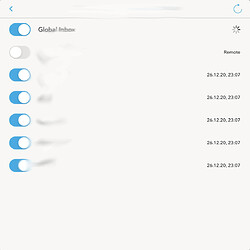 And you should be done

(if I am right that you set up the local sync store to try and sync with the iPad via Bonjour, you can remove it again - it is not required or helpful).

Ah. I see. You are right. Local sync store not req’d, far as I know.

I’m also not sure why you have a local sync store but it cannot be used with DEVONthink To Go.

I can’t find the other post. Why do you have to close the database on DT3 while using database to go?

I was trying different features to see if they would help with my problem. I erased the local store now.
Thank you.

Thank you all for inquiring into my problem. @Blanc suggested that I set up my iPad. That was done long ago. I just never used it since I could not find an efficient way to incorporate it into my routine.

But I think @Blanc is right.

When I opened up the settings for DTTG on the iPad, Bonjour was off. It had been working. Now I think it is not working. 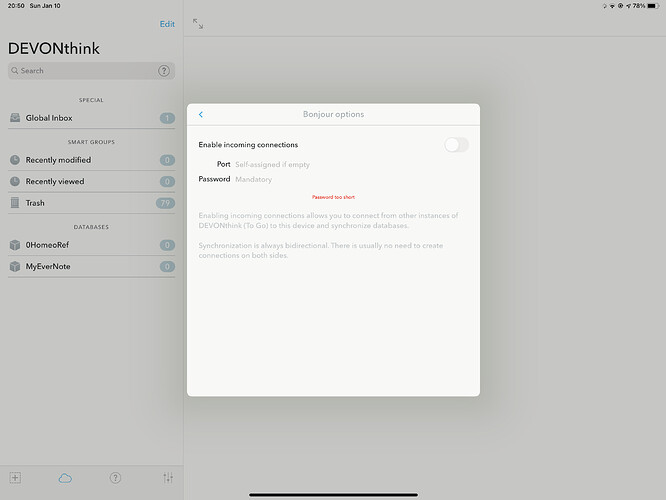 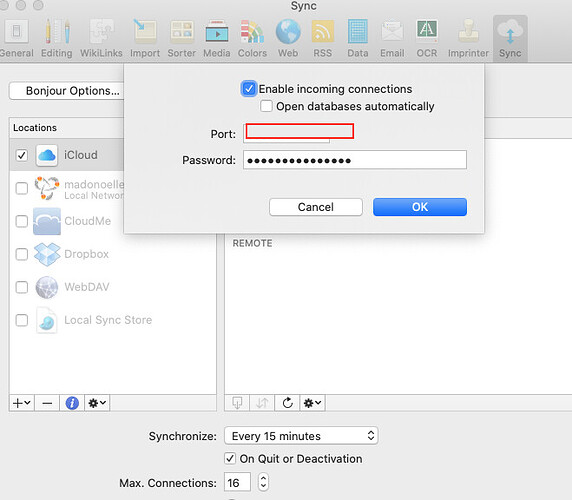 I wonder what is wrong.

When I opened up the settings for DTTG on the iPad, Bonjour was off.

Bonjour does not need to be on here (and note in the images I posted, Bonjour is off, as it should be - unless you use the iPad as the server); if you follow the instructions I posted, you will be able to sync with your Mac. You have turned Bonjour on on the Mac - which is now the Bonjour server. The iPad needs to be set up as a client - in the way I posted.

I am not getting the window you get. iPad/DTTG/Settings/locations/Edit clicked. 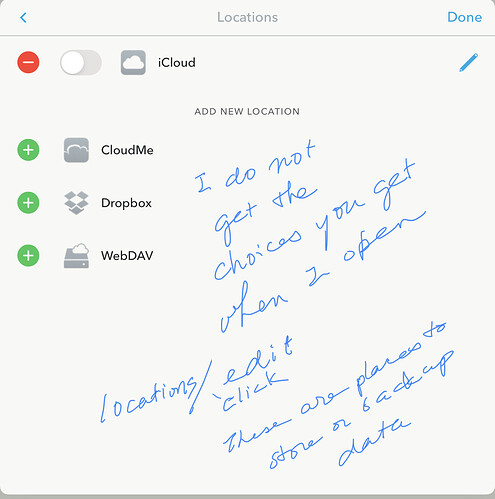 At that time was your Mac on, DT on the Mac open, and were you in the same network with both devices?