After setting PlainTextIsMarkdown to true, txt files still not showing as markdown

I have returned to DT after a long time of not using it, and delighted to find that support for markdown (and much else besides) is very much better. I’m glad to be back!

I would like to see my plain text files (in general) as markdown. I know that I can convert them to md, but then I need to delete the original txt file. Besides which, I would rather have my markdown files have a .txt extension (as this is how I have been working for some years) rather than .md.

So I have set the PlainTextIsMarkdown hidden preference to true (defaults write com.devontechnologies.think3 PlainTextIsMarkdown -bool TRUE) while DT3 is not running, but the text files are still treated as plain text, and I don’t have the option to preview the formatted output.

Any ideas what I’m doing wrong?

Any ideas what I’m doing wrong?

Not really but did you verify the change with

Yes, I did. It returned “PlainTextIsMarkdown = 1” which should work.

And this is how my md files display (as expected): 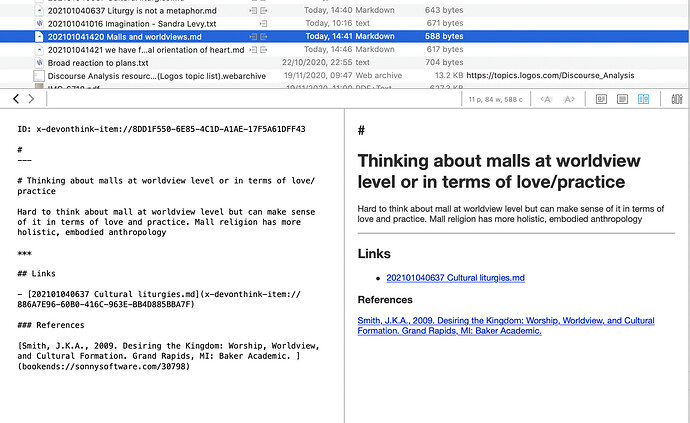 Does ex- and importing the file make a difference?

No, I have just tried it. I also tried it after adding some markdown formatting to it (not that it should make any difference, but just in case).

Which version/edition of DEVONthink do you use?

The command should be defaults write com.devon-technologies.think3 PlainTextIsMarkdown -bool TRUE

Ahah! Well spotted, sir! In the examples on p. 271 of the user guide, the line breaks after the hyphen so I unthinkingly interpreted it as being a result of the line breaking rather than something that needed to be included.

It now works fine! Many thanks for your help.