I have been using DT3 and Airmail for quite some time and regularly import selected email items from Airmail to DT3 either with the Sorter or by Drag/Drop to a given destination in DT3. It works well and copies the entire Airmail email message to DT3.

I just set up a brand new Mac and I am trying to duplicate my prior configuration. But when I do the same thing, I do not get the actual email message content in DT3 but rather I get a link starting with airmail://

Any ideas why the two installations of DT3/Airmail would behave differently in this regard?

Does DEVONthink 3 have full disk access on the new Mac? Is it allowed to automate Airmail?

Yes DT3 has full disk access on the new Mac.

No, it is not allowed to automate Airmail (but it was allowed on the prior Mac). How can I add in the automation privileges if Airmail is not prompting for permission?

Problem solved with help from the Airmail developers.

The change in behavior (no longer allowing a full message to be imported from Airmail to DT3) is a result of a coding change starting with the new Airmail 4. There is an option (see below) to use the “Legacy Mode” of the AIrmail software. Selecting the legacy mode restores the Airmail/DT3 integration to work just like it used to work. 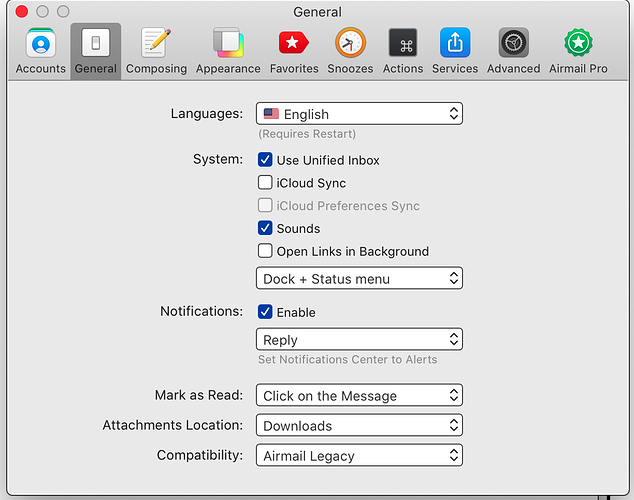