brookter has mentioned to me about this karabiner app that can change the caps-lock key or any combination of modifiers. I “think” other short-cut utilities can bind one or two modifiers into one key, but karabiner can bind three and even four modifiers together. I use BTT and it can’t do what karabiner can. Once you setup the key in karabiner, u can forget about its existence.

IMHO, this freeware has a minimal learning curve ( 30 mins?) for those who know a little bit about programming or about JSON. In my case, I change the caps-lock key into (1) the “left enter” key when it is pressed alone (so that when I use the mouse to choose an option in a dialogue box, I can use the left hand to press enter. It is not necessary but quite convenient for me) (2) a “shift-ctrl-opt” key when the caps-lock is used with another key together. With the ability to bind three-modifiers, we can find a modifiers’ combination that will not be a conflict to DT’s shortcut key AND without using all our fingers!

Just think it might be useful for some users. Cheers.

If you want (2), you may need to use the “complex modifications” tab, 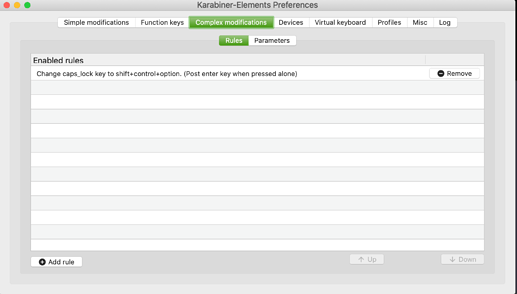 Choose the nearest modifiers-binding you want (the app will open the library on the web for you).

you can choose the one nearest to your need, and modify the JSON directly by opening the JSON in the “Export & Import” section:

It seems that the library has many combinations for download, but none of them has three-modifiers key binding to caps lock key, so I modified the nearest one to what I need.

Also sounds like an easy way to make a big mess

I was worrying about that initially, too!
But it seems like (1) I can work on “one” key only to minimise the mess and (2) the utility can activate the setting to a specific “keyboard”. So I can always switch to use another keyboard before further messing up…

Yesterday I posted excitedly about full Hyper key functionality being available in macOS 10.12+. I included a snippet of a config file that has apparently led to some confusion, so I'm elaborating

I use Keyboard Maestro conflict palettes to get around the profusion of keyboard shortcuts. I find my brain doesn’t seem to be able to hold as many shortcuts as many power users can.

so I modified the nearest one to what I need

That’s exactly what I copied and changed from the std library (that particular JSON is there)… The hyper key binds 4-modifiers (shift-control-opt-cmd) at once, then someone post the modified hyper key to two stage (press-alone and press-with-other-key). However, DT’s only allow 3-modifiers binding, and I need “enter” more that escape, and that’s why I need to modify the key.

BTT also handle conflict keys. But the more conflict keys I define, the longer the list I need to pick from the list. So I split into two lists: conflict key arrangement for most of the shortcut keys but there are less than 10 shortcuts that I am using all the time and so I use Karabiner to bind them. You are absolutely right that it depends on habits and I am still experimenting…

BTT’s conflict keys are not as good looking as KM, but they still do their job (since I paid for it a long time ago and want to avoid spending too much time learning another app right now…)

I think KM is definitely an app that I should study more about it AGAIN later. In the past few months I have came across with quite a few demo YouTube videos. But for very strange reasons (in fact I downloaded the trial six months ago) I just find the initial UI very confusing (I’m sure that it’s just me) and I never liked and thus never used automator (and I feel that the design of KM’s workflow is kind of similar?).

That’s why I like scripting and eventually BTT (also very confusing to me initially). They all start with a “blank” sheet and allow me to add what I need later.

Again, it’s just a “personal interpretation” that these are two different philosophy of design: KM/automator offers all the “task” options before users begin their customisation. For scripting/BTT, they let user to start by “steps” and offer step/task options for the next step. So, it seems that some apps are based on “a task is build on a combination of tasks” and some are based on “a task is building on a combination of indivisible steps”. Obviously, I could be very wrong.

I am guessing that’s why I never use Siri-shortcut for the same reason…too much automator liked?

I also use Karabiner along with Keyboard Maestro. It allows for interesting combinations. One of the most useful to me is changing right ⌥ into ⌘⌃⌥⇧ so that I can use Keyboard Maestro to resize any window by hitting ⌥→, ⌥← and so on.

Frankly I have found that. It is a real problem finding and remembering shortcuts, even with KeyCue which I have. I had Karabiner and a hyper key. I uninstalled it after a few months. I found I could achieve the same result with just changing caps lock to control in the native preferences. I used that same combination for all the Keyboard Maestro hot keys I previously had on a ‘hyper’ key.

I do the same. Just use the key and let the pallete sort it out now. I just wasn’t using shortcuts I had made and carefully planned. Just wasn’t using them. So I just jam them together on Keyboard Maestro now just like you do. Far the best way I have found.

With the ability to bind three-modifiers, we can find a modifiers’ combination that will not be a conflict to DT’s shortcut key AND without using all our fingers!

IMHO, the main value of Karabiner (to me) is not about whether palette/s or many shortcut keys is a better way. The way I see it, the main value of the app is to enable a combination of modifiers in a way that such combination will not be of conflict to any of the existing DT’s shortcut keys - whether the preference of a user is to use palette/s, conflict keys, or single shortcut.

For example, if I know it for sure that “shift-ctrl-opt” is a combination that will not be used by any DT’s shortcut keys then I can pick any key to use with this modifiers’ combination in assigning shortcuts/scripts in DT. A best-case scenario is that “shift-ctrl-opt” is not used by all of my frequently-used apps in the system (in fact, that’s my current situation). Under such a scenario, I will know that whatever shortcuts (palette or not) I intend to assign, the modifier will not be used by any apps. For me, I only need(use) one key in Karabiner to make it easier than to press three modifiers at once.

So, I am not trying to say that Karabiner is a better utility than other apps, I am saying that Karabiner helps to setup a “no-brainer” modifiers’ combination for any application that uses shortcut keys and allows user to just press one key for such combinations. There is nothing to do with whether palette or individual shortcuts are better…

Fair point, I can see your strategy.

Do yourself a huge favor and take a good, long look at Keyboard Maestro. Trust me! (said the stranger in the hat)

I agree with you regarding Keyboard Maestro. I only have a relatively small number of simple macros, most on palettes including conflict palettes. I have a few snippet text expansions too, some tiggered from strings and some, again on palettes. I find it invaluable. I do have macros on hot keys to move around DEVONthink 3 as a matter of fact, to change focus from pane to pane mainly.

I am guessing we will now have more time to spend on doing different things in the next few months.

+1 @arasmus
You should just invest some time to get closer with KM, and I’m sure you’ll find many apps, you can drop using due to KM