Annoying Sound plays every time a file syncs to the cloud

Hello all. I’m a new user trying the DEVONThink 3 beta and have discovered an extreme annoyance. I set up sync to Dropbox and every time a file syncs (uploads/downloads) there is a popup in the bottom left corner of the app and a loud annoying sound is played. This is extremely annoying as it overpowers whatever other sounds are playing (music/lectures/etc) and is repeated for every file. So you can imagine during an initial sync or bulk add/delete this gets very repetitive and annoying.

I found something interesting:

So this appears to be a bug of some kind caused by an interaction between the two apps. But presumably DEVONThink is doing something to trigger Parallels to play the sound from Windows. Is there any way to stop this behavior?

So this appears to be a bug of some kind caused by an interaction between the two apps. But presumably DEVONThink is doing something to trigger Parallels to play the sound from Windows.

DEVONthink doesn’t do anything unusual, it’s an ordinary application and does neither use sounds while up/downloading nor use/support Parallels in any way. But Parallels patches the system and therefore it’s more likely a weird bug of this software. Which version of Parallels do you use? Is it the latest one?

It makes no sense though that it only affects DEVONThink. I think it is due to the type of popup notification used by DEVONThink – Parallels is intercepting that API call and triggering the sound. Just a guess. If that is the case then the issue isn’t strictly one of Parallels either, it is the interplay between the two. Literally no other application I’ve ever used has triggered this behavior.

Dropbox also have its own notification. Just wondering if u have also disabled the “New files synced” option"? 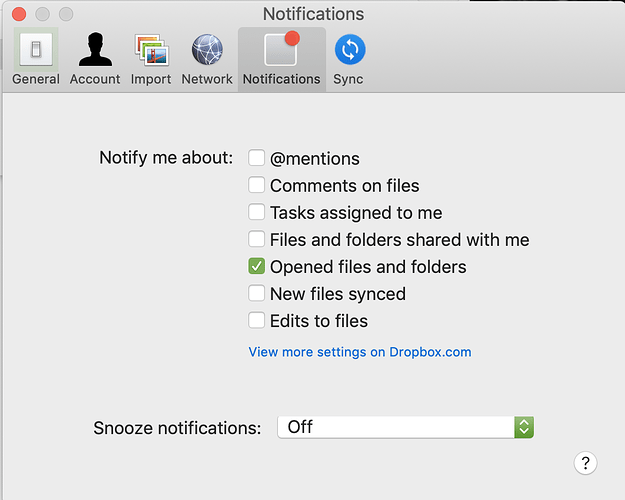 I do but you know what, your reply made me stop and think and dig a bit deeper and I found what was going on…

I have Dropbox running in Windows on Parallels tailored down to only sync a few folders, but Dropbox automatically adds any created files/folders to sync across all devices. So when I added DEVONThink to sync to Dropbox it automatically added it to Windows, and triggers the Windows notification, hence the sound.

Here’s the weird part – Parallels was running but Windows was suspended so should not have been operating at all, yet Dropbox installed on Windows was still syncing the DT folder in the background and triggering the notifications in Windows that could be heard but not seen. Strange. Clearly some Windows processes still run in the background.

That’s why I assumed it was an issue with DT, because Windows “wasn’t running” obviously.

But regardless that solves it, I disabled all notifications in Windows so even if it syncs a folder it will shut up from now on.

Thanks for the lead!

Thanks for ur tips, too!
I am also running PD14 for some window only apps. I haven’t encountered ur issues mainly because I mount/share all macOS user folders to Windows by the PD14 setup. So, I don’t need dropbox to sync files in Windows.
I find myself almost not using virtual machine of Windows these days. (1) I’m getting a bit sick of being charged the “Parallel Desktop” tax for every MacOS upgrade, and (2) I find increasing number of windows apps are now having their MacOS equivalent (even Excel has brought back vba to its version for Mac and Bloomberg remote on Safari (i.e. Mac) is now as responsive as its native app on Windows).

You should not have local sync data for Dropbox, on macOS or Windows. It wastes space and bandwidth, and also spams a machine with notifications that are enabled by default.

in the Dropbox application’s Preferences > Sync > Selective Sync, press the Choose folders to sync. Make sure the Apps/DEVONthink Packet Sync folder is unchecked.

Yeah I rarely ever use it. The main reason I bought it was to support a very specific piece of software (SuperMemo) that only runs on Windows, and I wrote a set of powershell scripts to sync the library to dropbox for data backup purposes. But I haven’t used it lately.

@BLUEFROG Yes that’s exactly what was happening. I recognize that DT does its own sync, thanks. I didn’t choose to sync, Dropbox automatically opts you in to sync every time you add a folder or file, so as soon as I set up DT the Windows DB client in Parallels started syncing the data. Works great for most uses but gets really annoying in some cases like this.

I didn’t choose to sync, Dropbox automatically opts you in to sync every time you add a folder or file, so as soon as I set up DT the Windows DB client in Parallels started syncing the data.

Correct and that’s why give specific instructions on disabling our root sync folder.