Any way to expose metadata in Markdown documents to DT?

MultiMarkdown files can have metadata. MultiMarkdown supports a subset of YAML metadata, and does not seem to complain about other YAML. YAML metadata in Markdown documents is used by prominent Markdown-using applications like the Pandoc converter and static site generators like Hugo and Jekyll. GitHub Pages files use it. In other words, there are lots of reasons one might write Markdown with metadata.

For example, one might use the following sort of metadata block (with YAML’s “---” delimiters being optional for MultiMarkdown):

Happily, DEVONthink’s MultiMarkdown processing respects such metadata, by hiding it in previews, so it doesn’t clutter up the screen. My question is whether there is a way to expose some or all of these metadata fields to DEVONthink, or for DEVONthink to see it.

An application of this metadata visibility would be the following sort of automation:

I imagine it might be possible to script this by calling a separate YAML processor like yq from within a shell script in a DT smart rule. I’m wondering whether there might be any more direct way to do it within DEVONthink.

No, there is no support for parsing YAML data though, as noted, you could parse the plain text via scripting.

FYI, if you don’t use the --- blocks, DT still hides metadata. Also it does recognize some MMD metadata, such as css: some-css-file.

That said I, too, would love to be able to use MMD metadata better within DT. I have fiddled with scripting it and it is fragile, depending on frequent reading and parsing the file even if the headers haven’t changed. I guess that’s really the only way to access this data, but I wonder if it could be better if DT were more aware of it somehow.

I’m sure @cgrunenberg could figure it out, but it’s not likely to happen soon.

I’m wondering whether there might be any more direct way to do it within DEVONthink.

This should work in a smart rule too

@pete31 Incredible work! Thanks very much indeed, as this works beautifully from my toolbar.

Now I am now working on writing a short script that removes surrounding quotation marks (in various formats), should they be present in YAML. YAML fields are often escaped, because colons break them, and authors love colons in titles.

UPDATE: I made a Smart Rule to do this, below.

Thanks. Did you succeed with removing the quotation marks?

This helps a lot. How would you modify this script in case your list of tags in the markdown header does itself have colons in it? Due to some legacy of an old data management structure that is unfortunately not something I can change. Is there a straight-forward fix?

EDIT: Sorry, my problem was actually a different one (some of my exported metadata used tabs and some used spaces after the colon so I had to account for that). Now all works well.

Removing quotation marks from titles (where they wrap titles in YAML, but aren’t part of the names) just became a lot easier (for me) in version 3.5. It can now be done in a Smart Rule using regular expressions.

I’ve scanned the name for the regular expression ^[\"\'](.+)[\"\']$ which means: “Look for a name with single or double quotes at the beginning and end, and if you find that, capture the text between them.” Then I replace the name with the captured text, which is just \1, or in other words, the first capture-group. 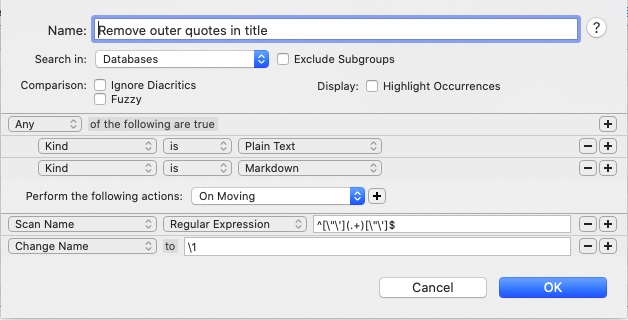 Scripts don’t trigger events (at least as long as they don’t use the extended perform smart rule AppleScript command of version 3.5).

That’s due to DEVONthink’s new handling of “invalide arguments”.

After the release of DEVONthink 3 I decided to continue to use “search window” in scripts so that DEVONthink 2 users could use them in, well, search windows. With version 3.6 that’s not possible anymore.

Is there a way to search for documents based on their Markdown front-matter? I have custom front-matter attributes (category and notetype) that I use to keep various “kinds” of notes separated and would (very much) like to be able to search for specific types of notes.

Is there a way to search for documents based on their Markdown front-matter?

The source of such a document would be useful, maybe it’s sufficient to enable the hidden preference IndexRawMarkdownSource .

I enabled IndexRawMarkdownSource (using defaults write com.devon-technologies.think3 IndexRawMarkdownSource -bool TRUE) and got almost where I wanted to be. That is, about ⅓ of notes matching a given search showed up. After editing and saving one of the notes that didn’t show up in the search results, and so I thought that perhaps the index wasn’t up-to-date. After rebuilding the database and repeating the search, now all notes matching the search show up.

This is exactly what I was looking for. Thank you (!). I’ve been using DT for years now, and still have many (almost daily) moments where I think to myself, “How did I ever manage without DEVONthink?”. DT (v3, especially) is a superb product, and I, for one, am very grateful for its existence (and for the developers behind it).

Thank you for the nice feedback, definitely appreciated!

What kind of queries are you doing here, by the way? I’m curious!

I have many (~12K) “Zettlekasten-style” notes that use various custom Markdown front-matter attributes such as ‘category’ and ‘notetype’. For example, I might have a note with the following front-matter:

Note that you may have to rebuild your database/s to get the Markdown front-matter to be fully indexed.