Just a thought: it would be great, while doing scripting, to be able to have DTPO-resident UI features that can be called upon when needed.

Another obvious one would be a scrolling text window whose data doesn’t have to be a text file in the database. Effectively, sort of a log window.

What I’d really love is a DTPO browser window that could accept a list of content records, and display them the records as an (arbitrary) selection of the database(s). Sort of like a search window, except you could script any set of records into it, not just ones which satisfied a boolean search criterium.

Intriguing. How does this custom results window go beyond adept use of the Search window?

What if the existing Search window had an option to “Search With” and we could put a kind of more-powerful-than-boolean scriptlet into Search With that would control the search intelligence? Same or similar outcome as your custom results window?

(Obviously, controlling the scope of Search With – making it non-invasive – is a major challenge.)

Well, an obvious use would be to return results from various manipulations of tags, but I expect that all of these will be provided in DTPO in due time.

I also maintain files with attributed data (“genre” = “narrative”) in YAML and JSON formats, so I could further refine results based on these criteria. XML and DTPO sheets are also possibilities. Again, metadata fields are announced for DTPO v 3.0, I think, but who knows… (As I write this I see that metadata has been greatly “functionalized” in the last few releases.)

But I think the best use, which DTPO will never incorporate by definition, it returning results based on the status of other programs. How about a window showing all your PDFs that have the keyword “film” and are marked “unread” in Bibdesk? All the files in a DTPO database linked to in your “current selection” in OmniOutliner?

I very much like this idea, Charles. I would much like to see such expansion of capabilities in DEVONThink. With metadata (really v3?, hmmm) and scriptable window targets it would be terrific to get away from goofy, non-standard and extraordinarily expensive, ahem, other “tools for notes” and just work with my stuff in DTPO.

Looks like DTPO already supports a few Spotlight entries, but I’m sure it could be generalized to other uses. As always, the hard part is integrating the functionality into the user interface: providing the core functionality (and making it scriptable) I would guess is the easier part.

I’m doing this right now, however. Grew out of not being able to OCR some things I took digital photos of while in an archive. The formatting is in YAML, so it’s easily parse-able into a data structure by Python or Ruby. These are my “notes” which can then be sucked out of DTPO and further examined in apps like OmniOutliner or Tinderbox that support organization by attributes and regular expression search: 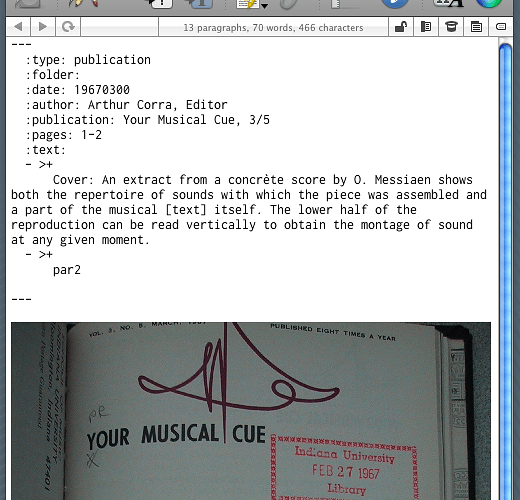