I have an instance where selecting Outlook in the import window starts the spinning ball. Originally I thought it was a memory issue as the iMac had only 8Gb so I maxed the RAM to 64Gb, hoping this would solve the issue. Sadly it remains but with a new twist, it now loads Apple Mail as well.

Apple Mail has all email accounts disabled to stop it loading thousands of emails before DT3 does its thing. I have had to Force Quit after many hours waiting for the app to begin the selection part of the process.

It is the most recent version of DT3, I have more RAM than I really need (though it is nice to have no issue there) and I have even tried making Outlook work offline. Does anyone have any suggestions as to what might be the problem and its resolution. Console gives me no clues, and DT log empty.

I hope someone can help.

I had a similar issue. I found that in Apple Mail that if I went up to Mailbox / Add to DEVONthink or Message / Add to DEVONthink that I had better luck and the system was not timing out as much. Hope this helps. I wish that it was better and dealing with this as well as it’s somewhat frustrating when you wait for 3 hours and nothing happens. I’ve been there too. 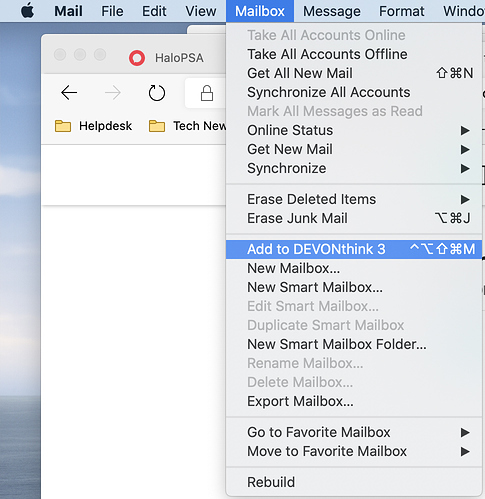 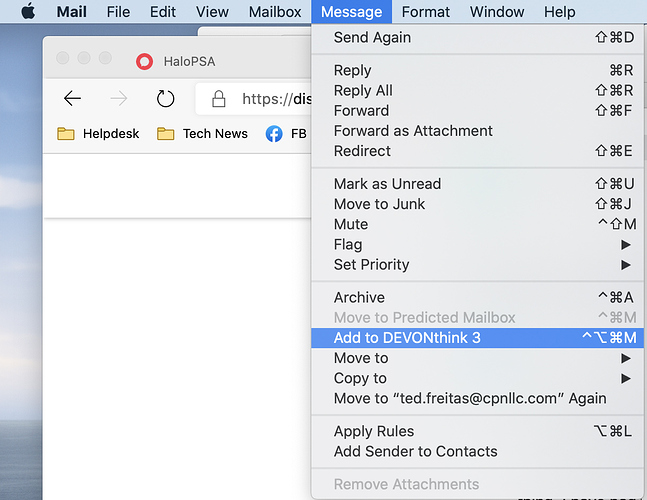 Thanks for your suggestion but can you imagine trying to pull over some very big mailboxes and then de-duplicating after! I have always found the archive function a bit slow but the payoff was a better-maintained archive.

I will have to go your route though if there is no solution to having full archiving functionality. Thanks again.

I only archive mail to DT once a year, which means I have to move thousands of messages at a time. So I make the transfer to via mbox import and export. To help member remember how to do the yearly task, I wrote up my process on my blog. Maybe it will help you, even though it’s not exactly what you asked.

I’m sort of a packrat when it comes to email messages, so by the end of the year my IMAP account is cluttered messages I’ve read. I like to keep them around for reference, but I also want to clear...

Thank you, it is helpful though does not directly answer the question. The many different ways of getting mail into DT is one of its strengths but the archive is magnificent when it lets me use it!

I was suggesting an alternative method that you could use. Isn’t the end result the same?

It is, of course, except the friend who has the problem doesn’t like change and they were happy archiving on DT2. The process on DT3 is taking longer than their patience allows. They have been very patient and put 64Gb of RAM into their machine in the hope of removing an obvious obstacle.

There is no specific plugin for Outlook like there is for Apple Mail.

the friend who has the problem doesn’t like change
…
The process on DT3 is taking longer than their patience allows.

“The world has moved on…”
~ Roland Deschain

The System Preferences route seems to have solved the problem. Thank you very much.